Whether it was the beginning of a tennis journey or a tournament debut after years of hard work, youth tennis thrived across Florida in 2019 through different programs, competition formats, and various championships.

Here are some of the 2019 highlights: 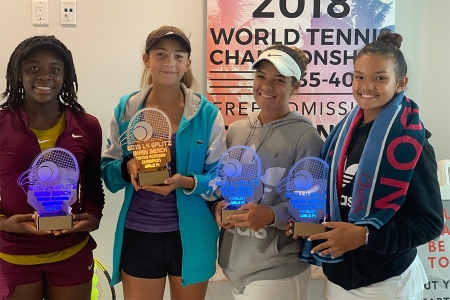 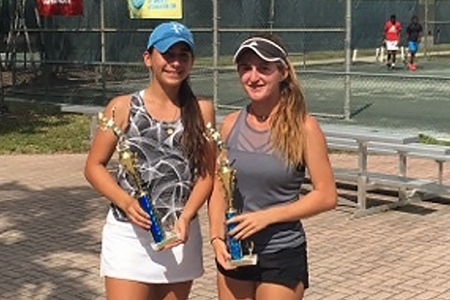 The Splitz team tennis tournament format debuted in Florida in 2019 to offer juniors more fun opportunities to compete. The format consisted of two-player teams competing in No. 1 singles, No. 2 singles and doubles play. Teams that won 2-of-3 sets won the team match, and players advanced through the draw as a team.

“USTA Florida has always recognized players enjoy playing in a team format,” said USTA Florida Director of Youth Tennis Jason Gilbert. “It’s fun, you get to play with your friends, and you can create a lifelong positive experience with tennis. There were several other areas of the country trying an innovative idea for team play and USTA Florida wanted to bring it to their players.” 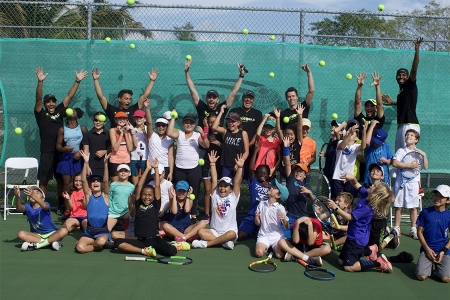 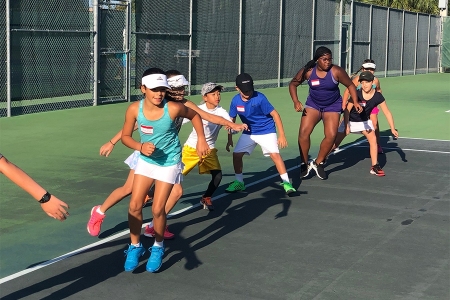 More than 180 promising young tennis players looking to develop their skills and technique took part in Early Development Camps (EDCs) that were expanded throughout Florida in 2019. With an emphasis on fundamentals and overall athletic development, EDCs serve as the beginning of the TEAM USA Pathway designed to provide additional training opportunities for tennis players ages 7-10 in each USTA section.

“I believe the EDCs allowed us to get the right kids exposed to the Team USA curriculum, kids who were motivated and eager to learn,” said Robert Gomez, who directed an EDC in Coral Gables in April. “In the end, getting motivated kids together creates a synergy that fuels growth and development.” 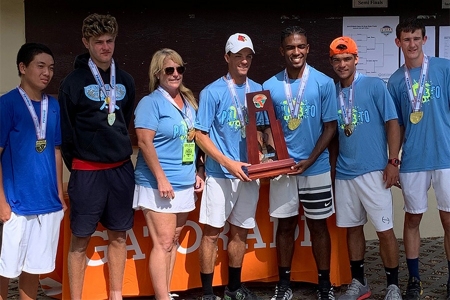 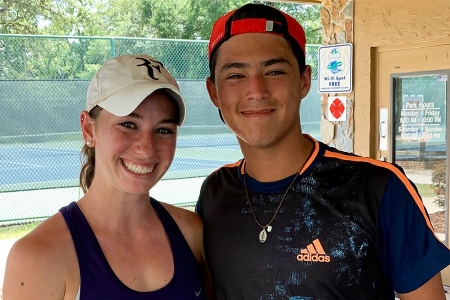 Several teams were repeat champions at the 2019 Florida High School Athletic Association (FHSAA) State Tennis Championships in May, while some individual winners swept their singles and doubles matches and even established new records. The Miami Palmetto boys made it back-to-back championships in the 4A team division, while the Doral girls claimed a three-peat in the 3A. In the individual division, Pine Crest’s David Lins and American Heritage Plantation’s Natalie Block claimed both the singles and doubles titles in 2A, while Alana Wolfberg of Timber Creek established a new championship record in the 4A girls with her fourth title win in four years, smashing the former record of three titles held by the great Chris Evert. 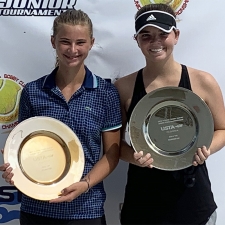 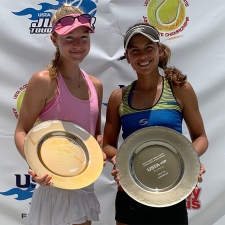 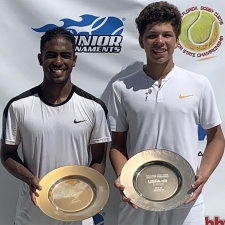 Younger age-division players took the stage at Florida’s top junior tournament in June, competing in the 2019 USTA Florida “Bobby Curtis” Junior State Singles Championships at the USTA National Campus in Orlando. Miami’s Randy Wilson and 16-year-old Sophia Fornaris of Pinecrest each captured their first-ever “Bobby Curtis” titles in the boys’ 18s and girls’ 18s divisions respectively. Top-seeded Brooklyn Olson of Bradenton captured the girls’ 16s final in what was her first-ever “Bobby Curtis” tournament after relocating to Florida from Kansas, meanwhile, the boys’ 16s saw an upset in the final when No. 3-seeded Mekhi Gbedey of West Palm Beach topped No. 2 seed Yannik Rahman of Miami to capture his first Florida state title while also stopping Rahman from a third straight “Bobby Curtis” title. 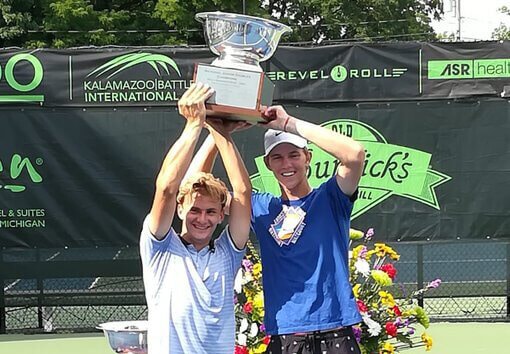 Florida junior took home two titles out of four finals at the USTA Girls’ and Boys’ 18s Hard Court National Championships in August, where the nation’s top junior tennis players competed in eight national championships in the 12s-18s divisions. The Sunshine State pair of Martin Damm and Toby Kodat of Bradenton thrived in the boys’ 18s doubles to win the final while Alexander Bernard of Bonita Springs won the boys’ 16s as the top seed. Runner-up efforts include Boca Raton’s Gabriella Price, who reached the girls’ 18s final, and Bradenton’s Victoria Osuigwe who fell in the final of the girls’ 12s doubles.

Several Florida juniors found success at the national level in the 2019 Jr. National Doubles Championships in August, hosted at the USTA National Campus in Orlando. The top result was in the Girls 16’s where Natalie Block and Amber McGinnis were crowned champions with a 6-4, 6-3 win over Madeline Atway and Danielle Schoenly from the USTA Midwest section. The 2018 USTA Florida Male Jr. Player of the Year Logan Zapp, along with his partner Jameson Corsillo, reached the Boys 18’s main draw finals finishing 2nd overall to champions Blake Kasday and Alejandro Quiles from the Intermountain section. 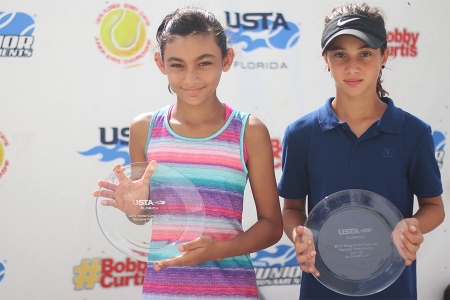 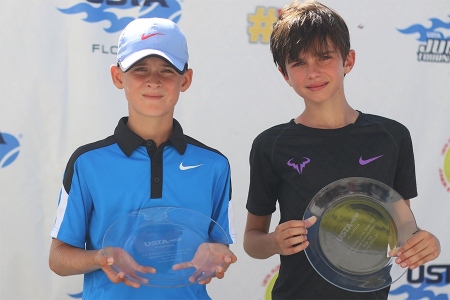 Miramar’s Daniel Patsula and Naples’ Riddhi Thakur won state championships in 10-and-under finals at the 2019 USTA Florida “Bobby Curtis” Green Ball Sectional Championships at the USTA National Campus in Orlando. The top-seeded Patsula in the boys’ final overwhelmed No. 2-seeded Andrea Elias Mato Bisarini of Medley, Fla., 4-0, 4-0. The girls’ final saw an upset as the No. 6-seeded Thakur rolled past No. 5 Zara Kirkan of Aventura, Fla., 4-1, 4-1. 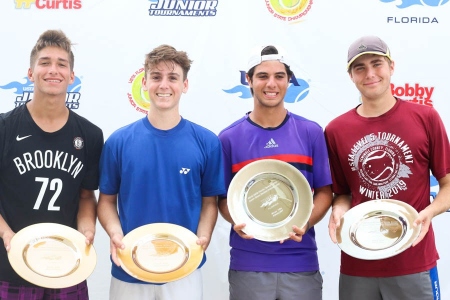 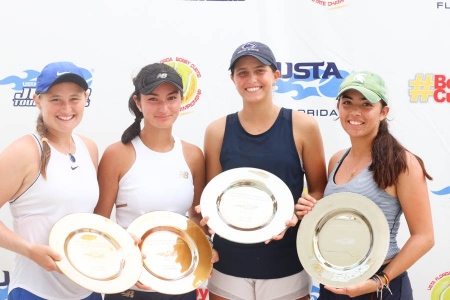 Inclement weather proved to be an issue for the 2019 USTA Florida 18s-16s “Bobby Curtis” Junior State Doubles Championships, which had to be rescheduled to October. Boca Raton’s Lara Smejkal added a third “Bobby Doubles” title to her resume when she teamed with Plantation’s Natalie Block to win their first state title as a team in the Girls’ 18s division. The Boys’ 18s final guaranteed first-time Bobby Doubles winners as the top-seeded squad of Rockledge’s Gabriel Diaz and Titusville’s Colin Tavares defeated No. 3 seeds Eric Berenblit of Palm Coast and Sami Ozzor of Daytona Beach 6-2, 7-6(2). 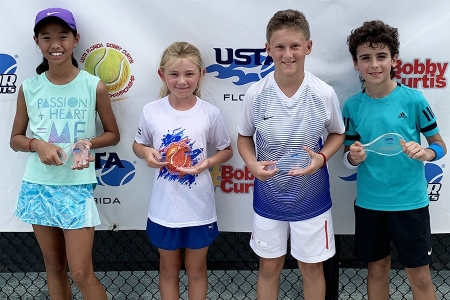 The duo of Taylor Allcott of Tampa and Haily Tong of Odessa were crowned champions at the 2019 USTA Florida “Bobby Curtis” Orange Ball Splitz Team Sectional Championships. Twenty-eight players in total age 10-and-under participated in a new “Splitz” format, where teams of two competed against other teams in both singles and doubles. Teams that won 2-of-3 sets won the team match, and players advanced through the draw as a team.

“It was a pleasure to share this new format with the players,” said Tournament Director Christina Lucas. “Splitz incorporates singles, doubles, and a team component. The opportunity for the players to play as a team throughout the tournament was so much fun.” 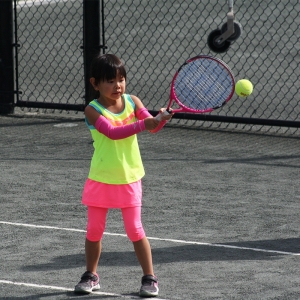 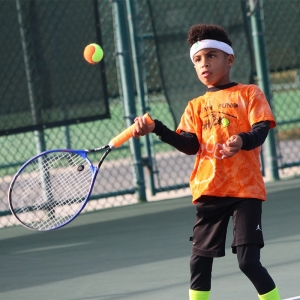 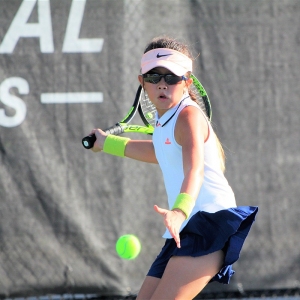 Entry-level tournament numbers soared to an all-time high in 2019 as young tennis players across the state searched for more opportunities to jump-start their competitive play. The no-pressure, fun environment promoted in entry-level tournaments offers beginner-level players who know the basics of how to serve, rally and score an introduction to tournament play.

“These tournaments are important because these young tennis players are the future of the game,” said Hawkes. “If they have a good time playing in entry-level competitions, there is a greater chance they’ll continue to play tennis for years to come.” 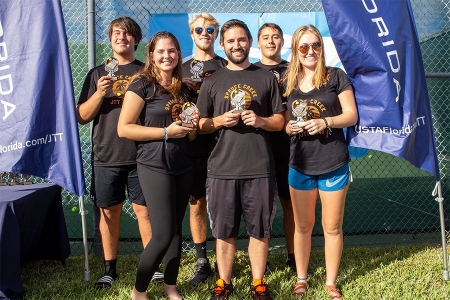 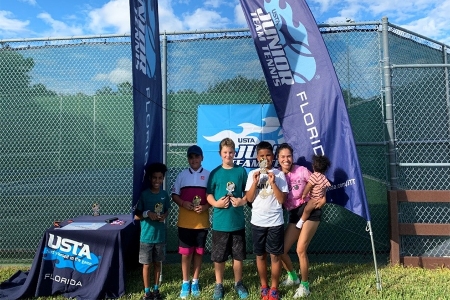 2019 saw two successful seasons of Junior Team Tennis in the spring and fall, which provides youth ages 6-18 with all the health and social benefits of tennis in a coed, fun and competitive team environment with age and skill-based levels. The programs promote social skills and important values, as well as foster cooperation, team play, and individual self-growth.

“Junior Team Tennis is a great way to get a lot of match play, meet new players and have fun,” said USTA Florida Junior Team Tennis Coordinator Liz Coates. “JTT provides kids a fun environment in which they learn that succeeding isn’t just about winning – it’s about how they play the game and respond to challenges.”

The United States Tennis Association announced in October that its Junior Competition Committee had approved proposed changes to the Nationwide Junior Competitive Structure that will include Florida in changing U.S. junior tennis. The USTA national body will implement the American Development Model (ADM), shifting to the Nationwide Junior Competitive Structure to grow junior tennis and attract and retain more youth players. The move will impact competitive events throughout the nation, installing a standardized structure and ranking system for tennis events across the 17 USTA Sections, to be used in all ranked competitive play. Changes will go into effect in 2021.

Throughout 2019, Florida junior players were recognized for exemplifying the finest qualities of sportsmanship both on and off the court. Players were highlighted for their positive attitudes, respect, patience, integrity, determination and energy for the game at events all across the state. USTA Florida considers these players excellent role models for other junior players and mentors for the game of tennis.

Let's get some 👏👏👏 going for these #Sportsmanship rockstars from recent junior tournaments. # 1 Brickhouse & Germino – Both were making fair calls consistently in every point in their match. # 2 Fuentes – He made great fair line calls through out his match. # 3 Matthew – After meeting up with his opponent at the beginning of the match, the boys started to leave the net area. Matthew said, “Wait…aren’t we supposed to shake hands?” He remembered that the Handshake Challenge. Great job to all! 🎾💪👏👏👏 #floridatennis

Those are just some of the youth tennis highlights.  To review more stories and results, click on the categories below:

For more information on junior tennis in Florida, click here.