University of Florida senior and club tennis team member Natalie Boruk’s blog from the 2015 USTA ‘Tennis On Campus’ Fall Invitational, held last weekend at the Palmetto Dunes Tennis Center in Hilton Head, S.C., with an accompanying video made by the team. 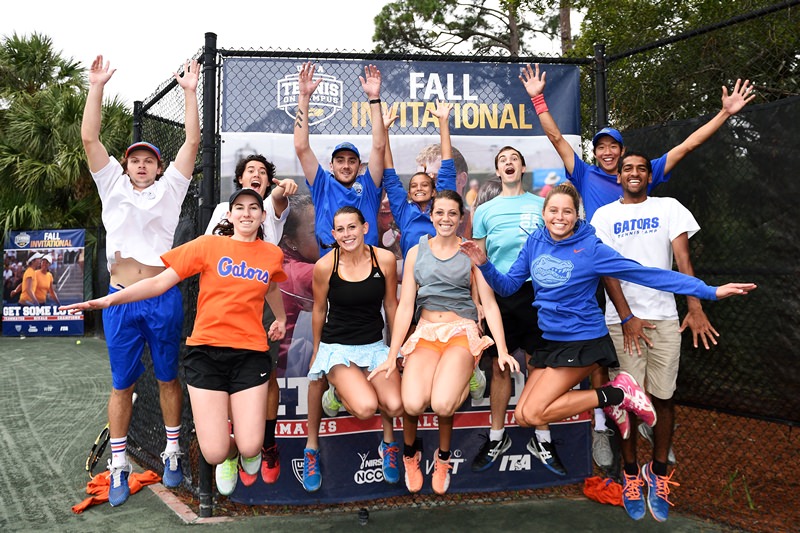 2015 marks the third year in a row that the University of Florida Club Tennis team has played at the USTA Tennis On Campus Fall Invitational. As reigning champions of the past two years, we began this year’s tournament very excited to see what was in store for us. We love traveling to Hilton Head Island, not only for the great tennis, but also for the atmosphere and great experiences. Some of our favorite memories from Club Tennis come from this tournament because we get an opportunity to compete with some great players, as well as hangout with our friends in a beautiful city. We look forward to exploring the beaches and local hangouts in addition to all the tennis. 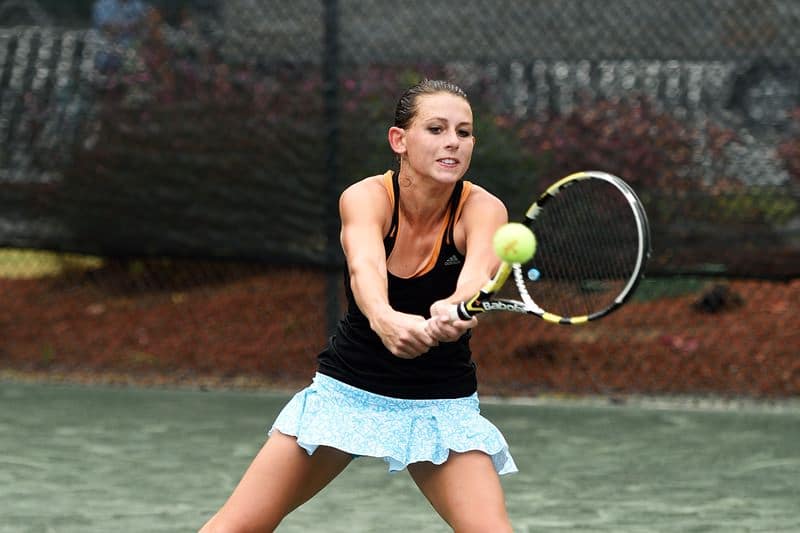 Entering the first day of the tournament, all of our players went in very focused and energized in preparation for the extremely short four-game format that was implemented for pool play. We had a rain delay during USTA Florida sectionals the previous year so we all knew from experience what a four-game format felt like and how quickly it goes. With a little help from Dunkin’ Donuts coffee, we played two great teams during pool play and came out victorious. We then mentally prepared ourselves for the first round of the Gold Bracket that was to be played later that day.

Typically, our team will grab lunch at Panera or a similar type of restaurant because everyone has different preferences as to what they like to eat before a big match. While some of us carb-load with bread and pasta, others prefer a simple and light salad or soup. Ohio State had a great team and everyone felt a little nervous that we had to play our first main-draw match on the same day as pool play. We went in mentally tough and made it through our first round that day.

Outside of the tennis court, we are all still very close and enjoy spending our free time with each other. Our choice for a team dinner usually consists of a restaurant that offers free breadsticks or bread in order to carb-load for the next day. That night, our choice was Carrabas.

Our first match was scheduled for 8 a.m. against Boston College and we all knew that we faced a very tough opponent. All of us take these matches very seriously and know that as the defending champions, everyone’s goal is to beat us. This simply fuels our fire and motivates us to play our best. BC had an incredible team. We went into mixed with a five game deficit and all stood along the sidelines hopeful for a turnaround. Up 6-3, we only had to win three more games in order to make it to the semi-finals and unfortunately, we were unable to do so.

Losing in the quarterfinals was tough for all of us. Last year, our victory was so exciting not only because we could call ourselves champions, but also because it meant that the state of Florida could receive two additional bids to the Tennis on Campus Nationals. BC played incredibly and we give them credit for being such a great team that we enjoyed playing. A tough loss only means one thing for us: time to hit the beach. After a little lunch, we all ventured to the shores of Hilton Head and enjoyed a little tanning over all of our farmer’s tan lines and some snacks from the tiki.

We always look forward to the team dinner because it allows us to interact with the other teams in a more social setting — we have made many friends the past couple of years from Fall Invite and Nationals so it’s always really nice to catch up and see everyone again. In addition to the great food, our team won three new Babolat tennis rackets as well as many of the raffle ticket prizes. In our eyes, that was our victory. And what better way to finish a day, than to all watch Gator football win that puts us in the top 10 of the nation!

For the past two years, we have all made sure to visit The Diner at least twice throughout the tournament because of their excellent food. Half of our team decides to go with the giant waffles topped with ice cream and whipped cream, while the others pick other great options such as a giant bowl of southern mac ‘n cheese or a classic Caesar wrap.

Competing for fifth place was still a lot of fun for all of us and both William & Mary as well as Cornell were great matches to play. Although we were unable to finish in 1st, we all had a great time! Now, we are looking forward to sectionals in order to secure that bid, and then hopefully nationals — where we will once again have an opportunity for redemption.

For more info on Tennis on Campus go to www.ustaflorida.com/adulttennis/tennis-on-campus. 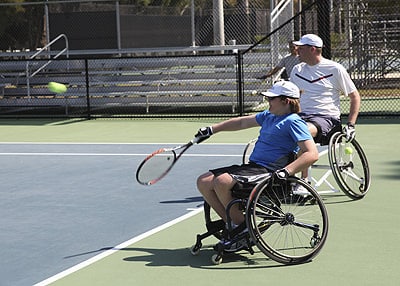 Florida’s Allen Fiske won the Men’s C Doubles with partner Dave Beauregard of North Carolina in round robin play, and as the top seed in the Men’s C Singles was upset in the final by No. 2 Rafael Rodriguez of Georgia 7-6(2), 6-4.

Top-seeded Sunil Patel of Florida fell 6-4, 6-2 in the Men’s B Singles final to unseeded Bill Eno of North Carolina.

Also runners-up were Hailey Remigio of Florida in the Women’s A Doubles with partner Amy Burnett of Tennessee, as the No. 2 seeds upset in the final by Joanna Nieh/Kristy Vaughn of New York; and Florida’s Marc McLean in the Quad Open Doubles, with partner Gary Luker of Canada losing to top seeds Greg Hasterok of California and Nick Taylor of Kansas 6-2, 6-0.

Many of the world’s top wheelchair players compete in the event, which is part of the UNIQLO Wheelchair Tennis Tour and sanctioned by the United States Tennis Association and the International Tennis Federation. The event is one of only seven Grade A junior tournaments in the world.

For more info go to www.ptrtennis.org/events/wct/main.

Teaching Tennis to the Blind is Rotonda’s Richards’ Latest Venture 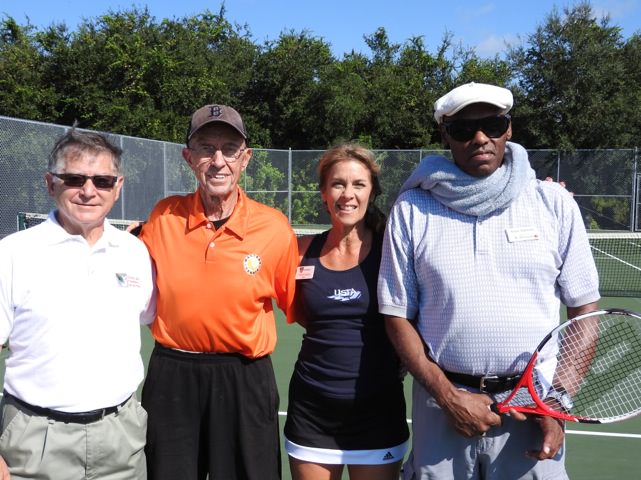 A new and intriguing sport is gaining traction in the U.S. and throughout the world. It’s tennis for the blind and visually impaired. And it’s taking hold right here at Rotonda Community Park (just north of Ft. Myers), thanks to our own veteran tennis instructor, Art Richards.

A smaller court is used and sound-emitting tennis bails that are florescent yellow in color and make a bell-like sound when they bounce. Players can follow the sound. This new recreational sport is often referred to as Soundball Tennis.

Ralph Robinson was the first to volunteer to take a lesson at the Rotonda Community Park. The date was memorable, too — 10 a.m. on the 10th day of the 10th month. Art arrived at the park much earlier to lay down special tape to mark the smaller Masters Tennis (60×27 foot) court. The tape has a 1/8 inch line under it, hence tactile, so Ralph could feel it with his feet.

When Art and Ralph met and shook hands, Ralph commented, “Everything I see is gray, even if I look up at the sun.”

Now it was time for the lesson.

Before hitting, Art gave Ralph extensive instructions. Ralph had racket in hand and a towel slung over his shoulder. He was ready to hit. The first few balls he hit were elevated but landed in-bounds. He improved his stroke as he went along. After one hour, the first lesson is complete. Thanks to Art and Ralph, Blind Tennis has made its successful debut in Rotonda West.

This novel sport with its own equipment and rules was first introduced in Japan just a few years ago. The tennis balls are made by the Japan Blind Tennis Federation. The initials JBTF are marked on the balls.

Art has given tennis clinics for thousands, young and old, for many years, including a session for deaf students in his native Massachusetts. So Art thought, why not try to teach the blind?

Ralph and his wife Kay lived in Camden, N.J.; Philadelphia, and other cities before settling in their home on Broadmoor Lane. Ralph is a determined man who is an instructor at the Lighthouse of Manasota Key where he teaches older blind people how to live independently. The mission of the Lighthouse is to “shine new light on living with vision loss.”

Among those on hand at the clinic was Christine Murphy, Master Tennis coordinator for the United States Tennis Association-Florida Section (USTA Florida). She drove over from Pembrooke Pines, a three-plus hour trip, to observe the clinic.

“Art really has made a name for himself in Florida tennis circles,” Murphy said.

Also on hand was Nick Gizzi, president of the Cultural Guild of the Greater Cape Haze Peninsula. The Guild donates equipment to Art. Art sponsors teaching lessons every Saturday morning at the Rotonda Community Park. He’s a 20-year Rotonda West resident with his wife, Doris. He can be reached at (941) 698-9480. 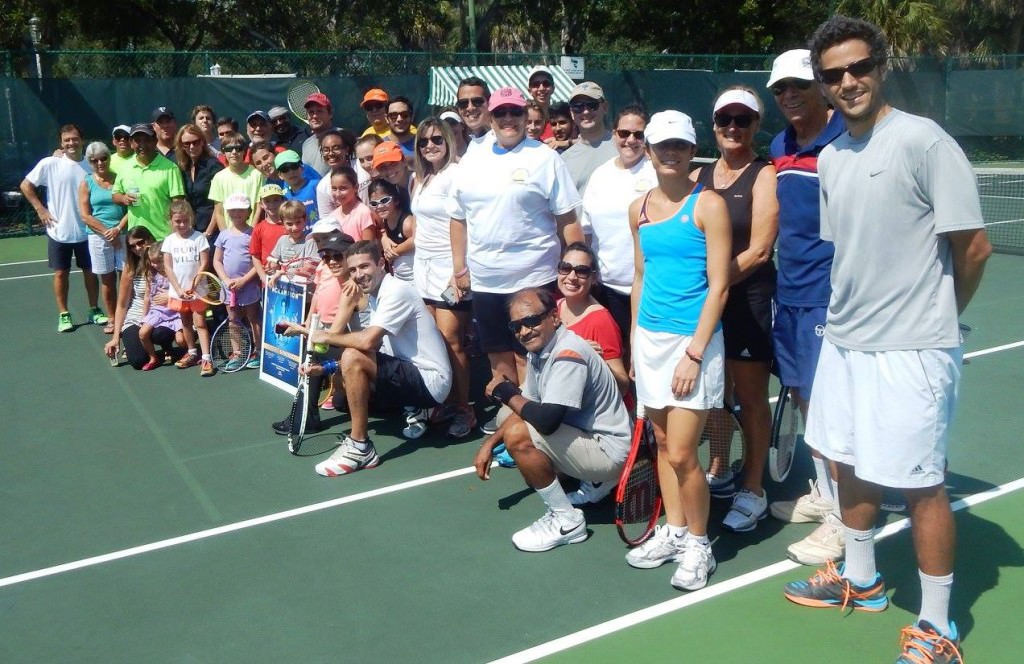 Events included free clinics, a 10 and Under Tennis group format, a 14-and-under rounf robin tournament, and a Pro-Am Round Robin Doubles Tournament.

“We had a fantastic event,” said organizer Gustavo Granitto. “Super performance by Robert Muralles, Dennis Rennock, and Steve Rapp! An average of eight matches were played by each participant. Kids and youth played amazing and parents were very supportive. We want to thank to all participants and all donors for supporting the Richard “Pancho” Gonzalez Youth Foundation, especially Robert Jones, Mariano Herrera and Philip Vonk. 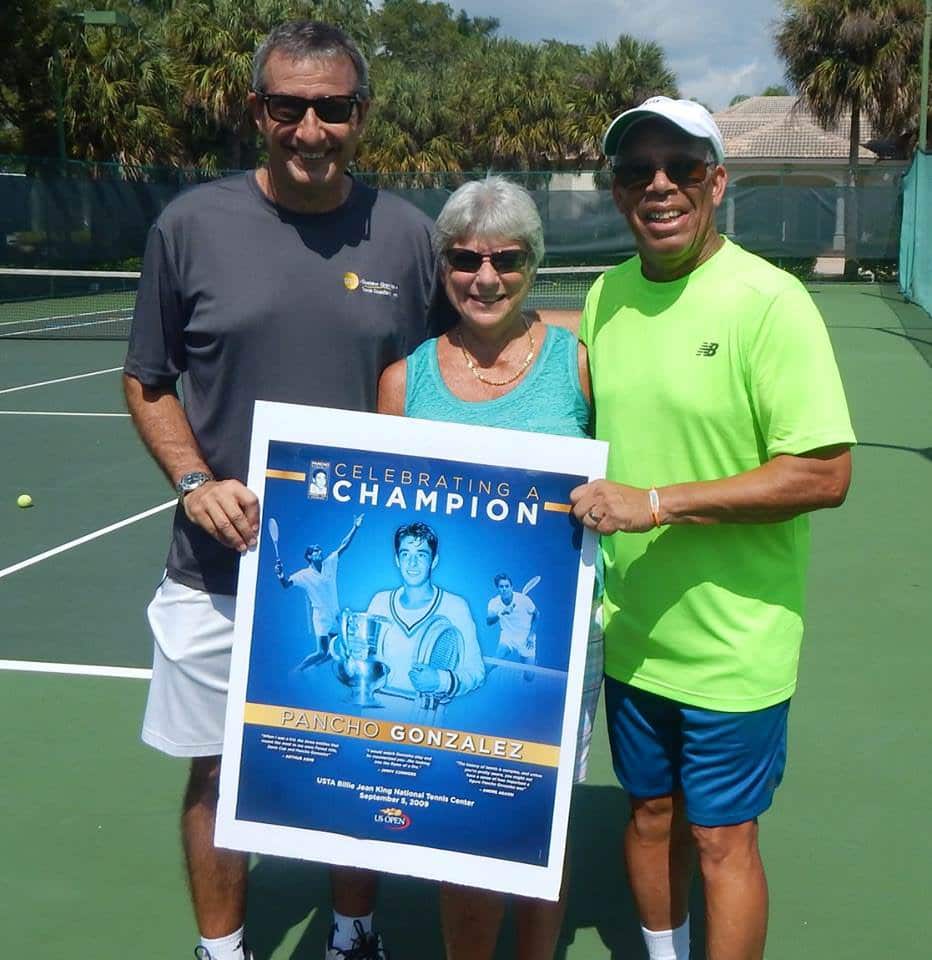 “Thanks to Pembroke Isles to hosting this event and our appreciation to USTA Florida and the motivational words of Nancy Horowitz, president of USTA Florida.”

The activity was organized by GTC Tennis Academy & Consultancy to support the Richard “Pancho” Gonzales Youth Foundation, a non-profit organization with a mission to inspire and enhance the lives of today’s youth through physical fitness, academic pursuit and character building, utilizing the sport of tennis.

To see more info on the event or photos click here.