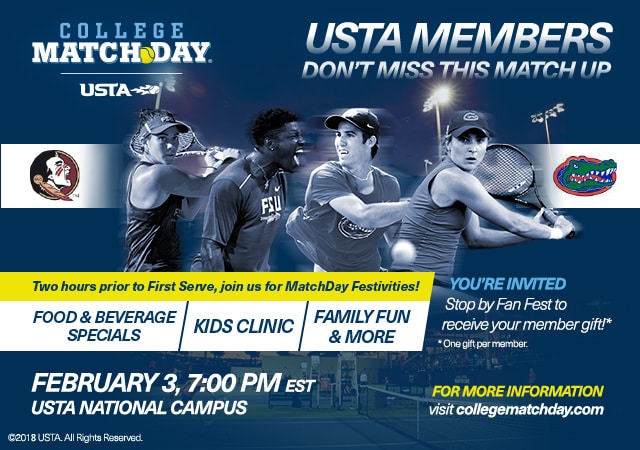 MatchDay festivities starting two hours prior to the match include kids clinics, games, food specials and more. College MatchDay kicks off on Feb. 3 featuring both men’s and women’s matches when the University of Florida faces rival Florida State University. For USTA members the Feb. 3 MatchDay will feature a free member gift at the Fan Fest booth.

To get free tickets go to www.ticketmaster.com/USTA-National-Campus-tickets-Orlando/venue/279662, or for more MatchDay info go to www.collegematchday.com. 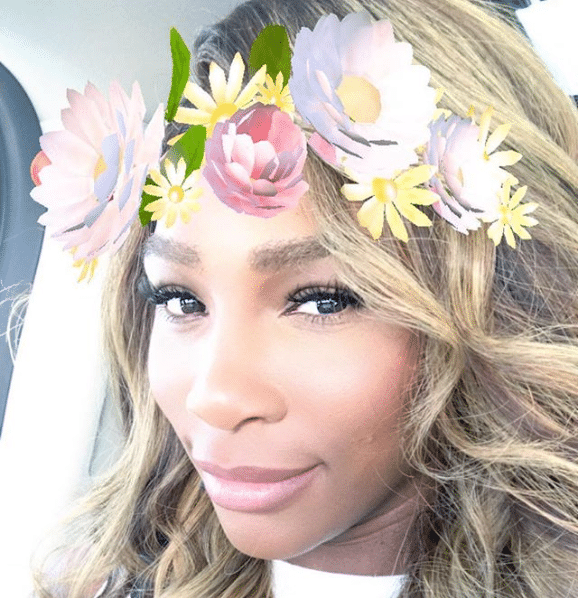 Serena Williams hasn’t played a tour match since winning the 2017 Australian Open. Now 12 months later and a new mother, it was announced Wednesday that she will make her 2018 debut next month for the U.S. in the first round of the Fed Cup versus the Netherlands in Asheville, N.C.

She will be joined by sister Venus and CoCo Vandeweghe on Feb. 10-11 as the U.S. embarks on their campaign to defend the Fed Cup championship from 2017 when they defeated Belarus in the final. Serena is 13-0 career in Fed Cup singles for the U.S. Venus is 19-2 in singles, and Vandeweghe went 8-0 in singles last year.

“We were close to 5,000 seats a day,” said Demp Bradford, executive director of the Asheville Buncombe Sports Commission, on Wednesday. “We’re probably going to be sold out in the next couple of hours.” And so they were. 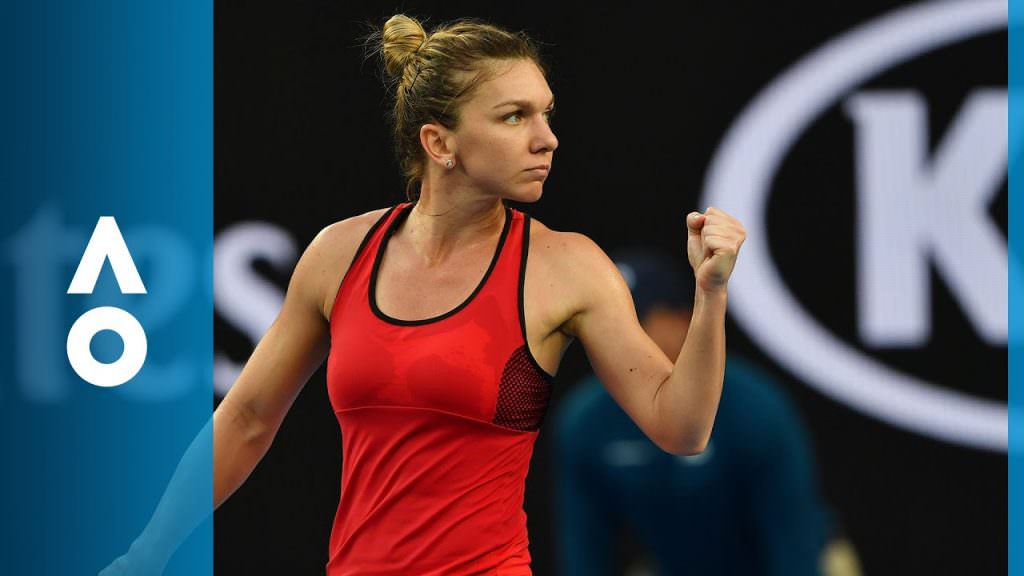 Simona Halep has to be the only world No. 1 in history without a clothing contract…Florida’s Alicia “Tornado” Black, the former No. 3-ranked junior in the world, is preparing for a return to pro tennis after crowd-sourcing $42K to fund her hip surgery…26-year-old American Tennys Sandgren had never won a Grand Slam match before this Australian Open where he beat Top 10ers Stan Wawrinka and Dominic Thiem, advancing to the quarterfinals. He was 0-13 in previous Slam qualifying attempts. His run will put him on the verge of the Top 50 and make him a tour regular through the remainder of 2018. Sandgren this week tried to erase his controversial Twitter past and blast the media for calling him out, but Serena Williams wasn’t having any of it…Florida resident Naomi Osaka represents Japan but says don’t forget my Haitian heritage…Maria Sharapova attended the Battle of the Sexes movie premier by invitation of Billie Jean King, and says it softened her attitude towards maintaining a steely demeanor in the locker room…News.com.au on the Australian Open heat: “Was it really too hot for beer? “Melbourne, you’ve got a serious problem if it’s so hot fans are forgoing frothies…”…The new slate for the Tennis Hall of Fame was announced, and it includes former world No. 2 and Wimbledon champion Michael Stich and Helena Sukova, the former doubles No. 1 who won 14 Grand Slam doubles titles. Sukova in 1993 reached the US Open singles, doubles and mixed finals. 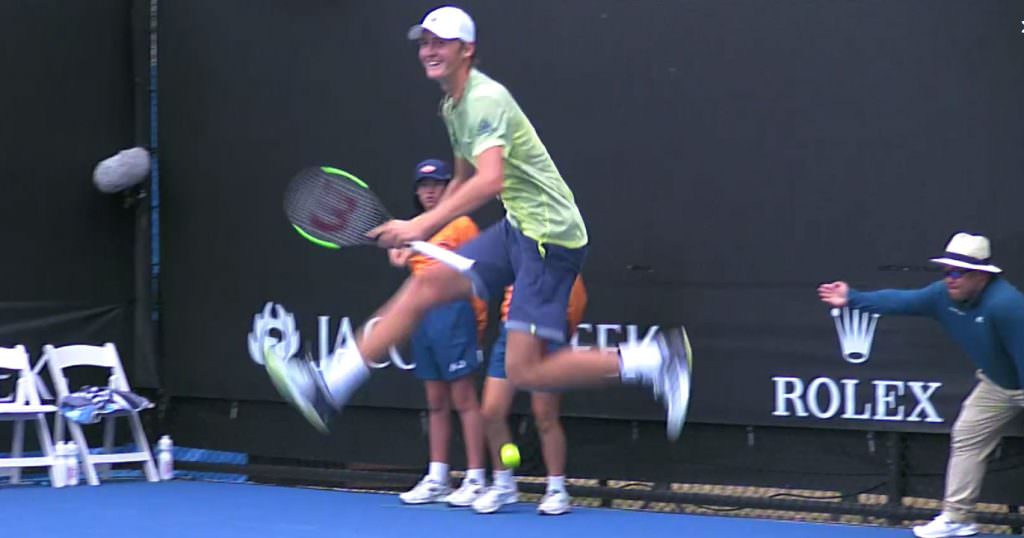 Sebastien Korda is the last American standing at the Australian Open as the Bradenton, Fla., resident advanced into the boys’ final on Friday in Melbourne.

The No. 7 seed upset No. 2-seeded Marko Miladinovic of Serbia 7-5, 5-7, 6-4 to set up a championship meeting with No. 6-seeded Chun Hsin Tseng of Chinese Taipei. It is 20 years since Sebastien’s father, Petr Korda, won the Australian Open men’s title.

“It’s a special feeling, it was also his big ‘5-0’ birthday a couple of days ago so I told him I’d get him something,” Korda said of his father. “Hopefully this will be a good present.”

The younger Korda paid tribute to his dad by replicating the elder Korda’s jumping scissor-kick after the win.

The No. 6-seeded Bryan brothers reached the men’s doubles semifinals but were upset by the No. 11-seeded team of Colombians Juan Sebastian Cabal and Robert Farah 7-6(1), 7-5.

See below for broadcast times for the boys’ final and other Australian Open championship rounds. 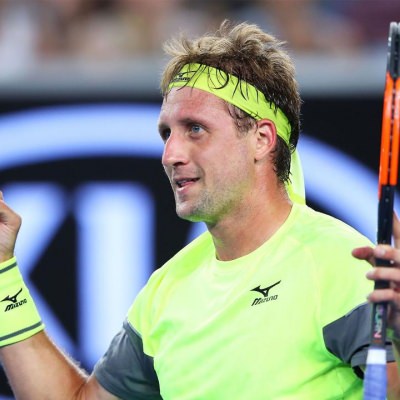 “They were jumping up and down, celebrating. She fell onto the pool table, cracked a rib. I was pretty worried. She went to the hospital, thankfully. She’s lying down, resting, watching some tennis and having a good time.”
— Tennys Sandgren on his mother injuring herself celebrating his success at the Australian Open

“Novak [Djokovic] really changed the game quite a bit with his yoga and breathing and diet. It takes a lot of discipline…[Breathing is] an important in-game relaxation tool. Slowing down your breathing helps with better decision making. Players look at the technical and physical side but not [these] mindsets.”
— Nathan Martin, long-time fitness trainer to Lleyton Hewitt, speaking to the Herald-Sun

“It’s all a vivid reminder of the advice we all give our kids: you are what your tweet. And the internet doesn’t forget.”
— Tennis writer Jon Wertheim of Sports Illustrated on players trying to erase past social media comments