In December of 2018 through the first few months of this year the USTA Florida competitive department presented seven Competitive Tennis Awards to outstanding adult and junior players, coaches and tournament directors throughout Florida.

Orlando’s Wolfberg put together one of the greatest female junior tennis careers over the last 40 years in Florida, which is saying a lot. In 2018 she won a third straight state singles championship, tying Chris Evert. USTA Florida Youth Program Coordinator Thad Hawkes presented Wolfberg with the award.

“Alana has represented the USTA Florida Section and the state of Florida in multiple junior team competitions nationally during her junior tennis career,” Hawkes said. “Congratulations to Alana not only for an amazing 2018, but for a stellar career while representing her family, her school and her state, and for being the very best of our sport.” 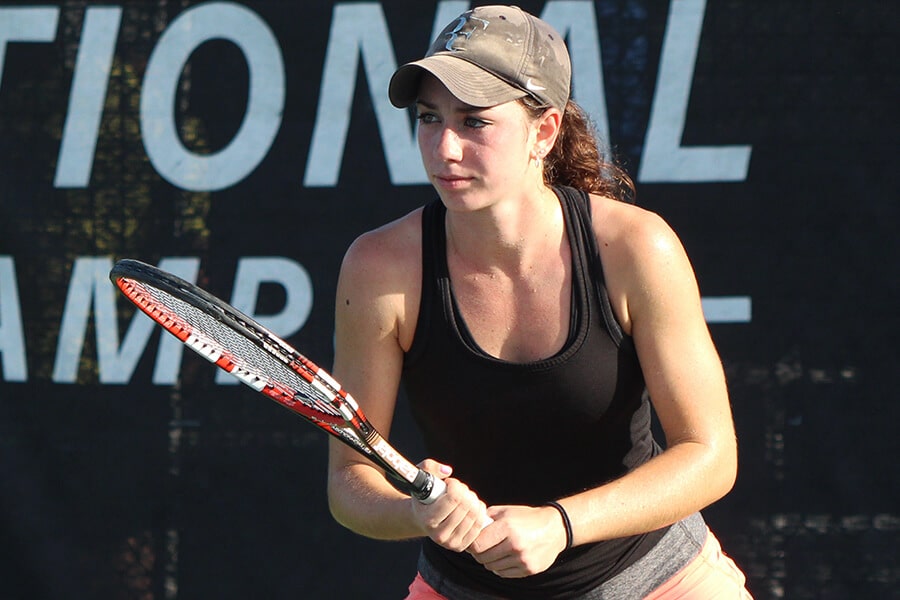 She is a three-time winner at the USTA Florida “Bobby Curtis” Junior State Championships, capturing two singles titles in 2017 (girls’ 18s) and 2016 (girls’ 16s), and a doubles in 2014 (girls’ 16). But rather than chasing ranking points or testing the pro ranks at lower-level tournaments, she has spent her formative high school years immersed in the “Purple People” experience at Timber Creek high, where earlier this month she surpassed Evert’s high school record.

Fleming Island’s Zapp first rose to prominence in 2017 when he won the boy’s 16 state at the The USTA Florida “Bobby Curtis” Junior State Singles Championships, which he used as a springboard an outstanding 2018 campaign.

In March of 2018 he won the Florida Level 4 event at the USTA National Campus, then the next month he reached the final at the Van Der Meer Southern Spring National. He followed with titles at the Level 3 Doubles Spring Challenge (May), National Level 2 Doubles (June), a finalist effort at the National Level 3 (July), a national doubles title (August), then winning the National Level 3 in Sanlando Park (September). 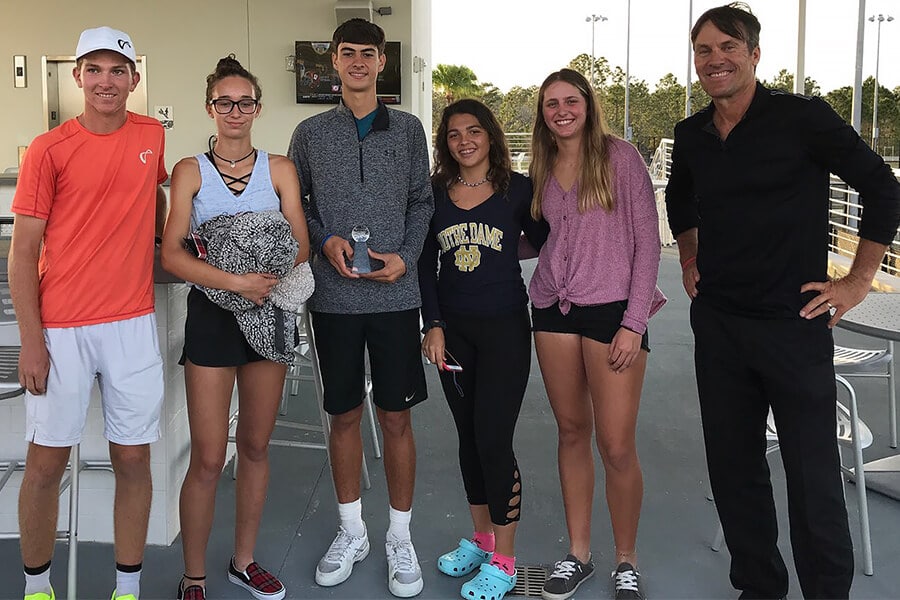 “He is a quiet gentleman, a team player, with a great sense of humor,” said coach Scott Williams. “He can see the opportunities on the court and take advantage of them. He puts others before himself when on a team, and his best tennis is yet to come.”

The rising senior at the University of Florida, also named the USTA Florida Junior Player of the Year in 2015, last year won the Wheelchair Tennis Collegiate National Championship at the USTA National Campus in both singles and doubles after representing the U.S. on the national wheelchair tennis team. 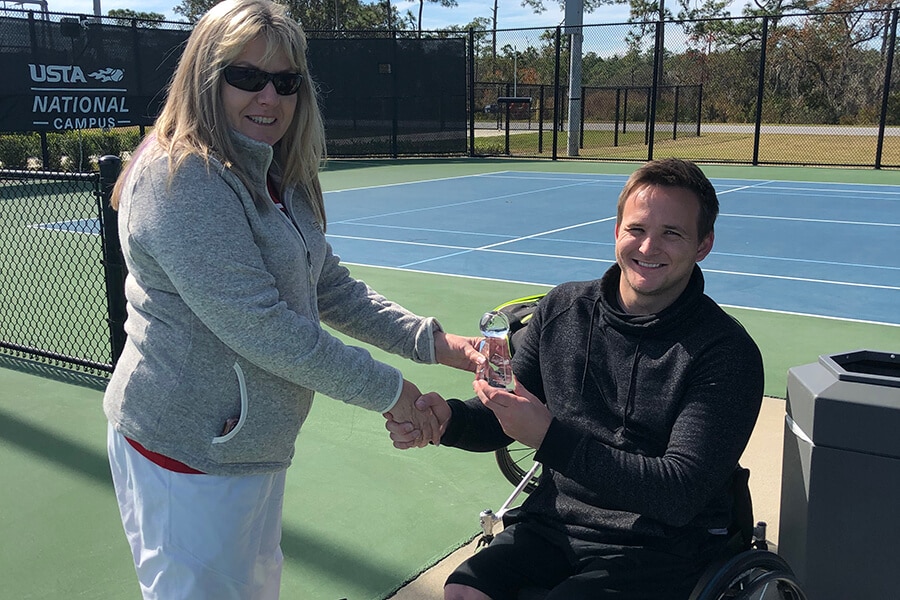 “I really started focusing when I was 12 and started going to tournaments,” Herman told usta.com last year. “It was a quick transition because the very next year, 2013, I went out to the junior World Team Cup in South Korea…I did not expect to come this far in tennis.”

Wolfe was presented with the Tournament Director of the Year award for his work promoting and operating recreational tournaments, running upwards of 50 adult and junior tournaments last year, and drawing large numbers of entrants due to the quality reputation of his events.

“He was chosen for this award because of the tremendous participation and what he brings to Florida as far as a tournament event and how it is run, how he markets it and the amenities he brings for the players and how he works,” said Ann Brown, USTA Florida youth individual play coordinator, who represented the award, speaking to the South Florida Sun-Sentinel. 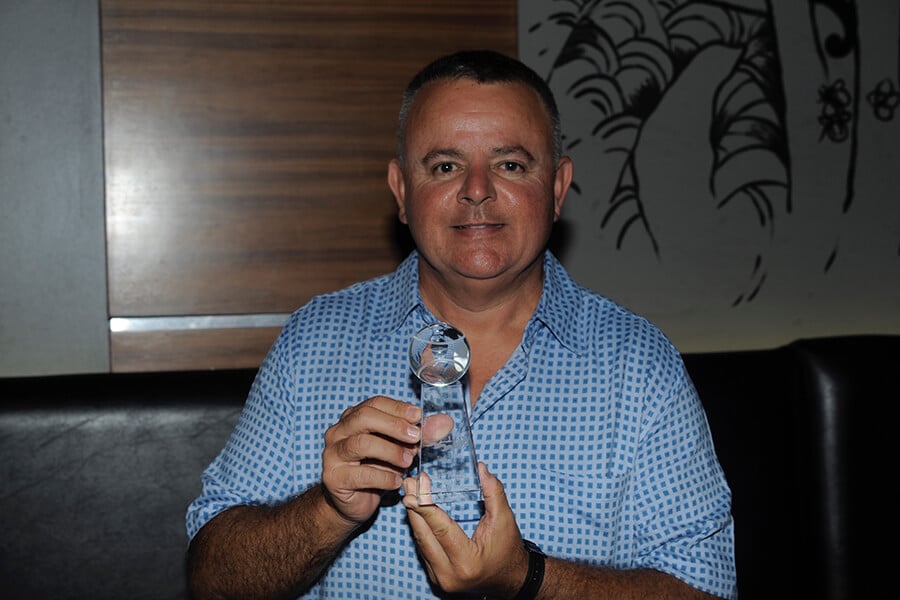 From surveys of more than 200 Florida tournament providers, Wolfe came out on top in terms of feedback and personal recommendations. “It was really nice,” Wolfe said after receiving the award. “It is a lot of hard yards, a lot of long hours, a lot of dedication from a lot of people.”

The founder of Magallan Tennis Academy at Boca Pointe in Boca Raton since 2008 has been consistently producing local, state, national and international junior champions, including No. 1-ranked players in Florida and the country.

“Eleazar is a truly great coach, but more importantly a great person,” said USTA Florida Player Development Coordinator Andy Gladstone. “His purpose is more than teaching tennis and running a top-notch tennis academy. Eleazar really wants the kids to be better people both on and off the court. I never saw a coach so well-liked by parents, players and his staff.” 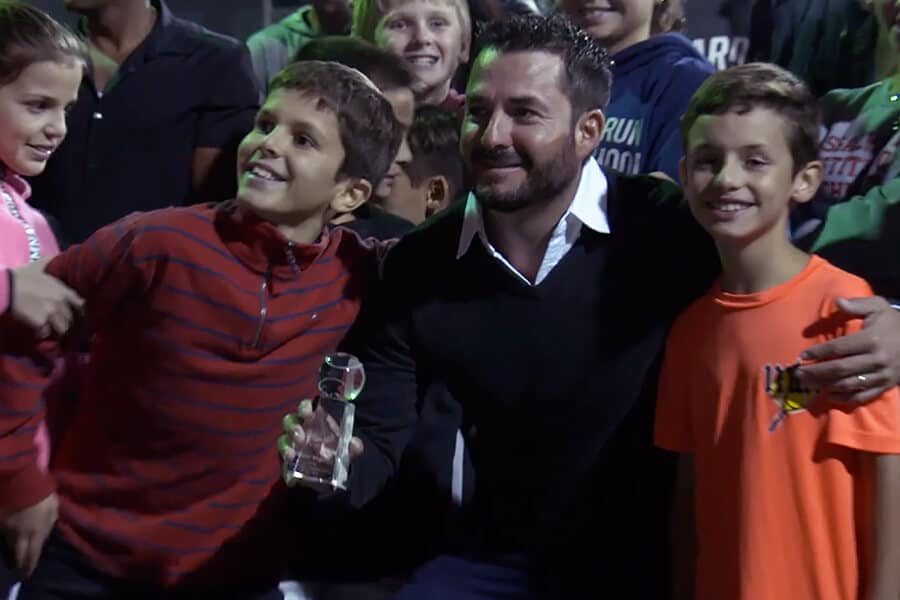 The former University of Florida star won the SEC title with his team in 2003 and was an individual four-time national junior champion in Mexico. He has coached more Top 5 players in Florida than any other academy in the last five years. “It is an honor to receive this award in front of the best teammates, coaches, parents, kids that work very hard day in and day out. Thank you USTA Florida, and thank you to all USTA coaches and friends that work and support our kids. Thank you to all families that care and sacrifice everyday for your children.” Nina Alshon, mother of national-title-winning Christian Alshon, said “He cares about each and every one of his players. He treats them all in a way that makes each one of them feel special, because I believe to him, each one is. He understands their personalities, and the best way to coach each one of them as an individual.”

The Jimmy Gantt Memorial Award is presented each year to a junior player in Florida who has overcome a physical impairment or injury and continues to compete to the best of his or her ability. This year’s recipient, Caleb Domkowski, a tournament player with one fully-developed arm, is currently ranked No. 51 in the 14s rankings, and was presented with the award at his home Kiwi Tennis Club in Indian Harbour Beach, Fla.

“Caleb Domkowski is not just an incredible tennis player, but an incredible person,” says USTA Florida Player Development Coordinator Andy Gladstone. “I was very impressed when his coach said that Caleb is a role model not just for the younger kids, but the older kids as well. Caleb is a great competitor and just a nice kid on and off the court.” 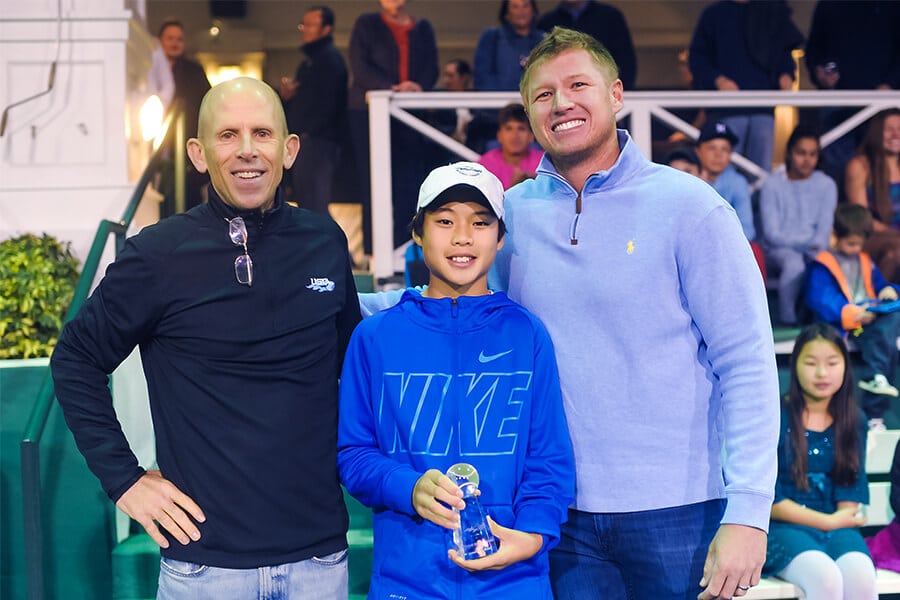 His mother Eva added, “It was a really special night, and we are grateful that so many of his tennis friends and family were able to share it with us.”

Vines, competing nationally in the men’s 60s, compiling a 23-1 record, winning three USTA Gold Balls. His only loss? He was forced to retire in the first set of a match due to illness.

“Nobody else was even in the discussion for player of the year,” said USTA Florida Player Development Coordinator Andy Gladstone. “The guy is a rock star in senior tennis. I had the privilege to watch him play a tournament match before I presented him with his award and was captivated by his incredible feel for the ball. Not only was his racquet skills exemplary, but his on-court demeanor was a breath of fresh air. His love for the game and friendliness to his opponents was awesome.” 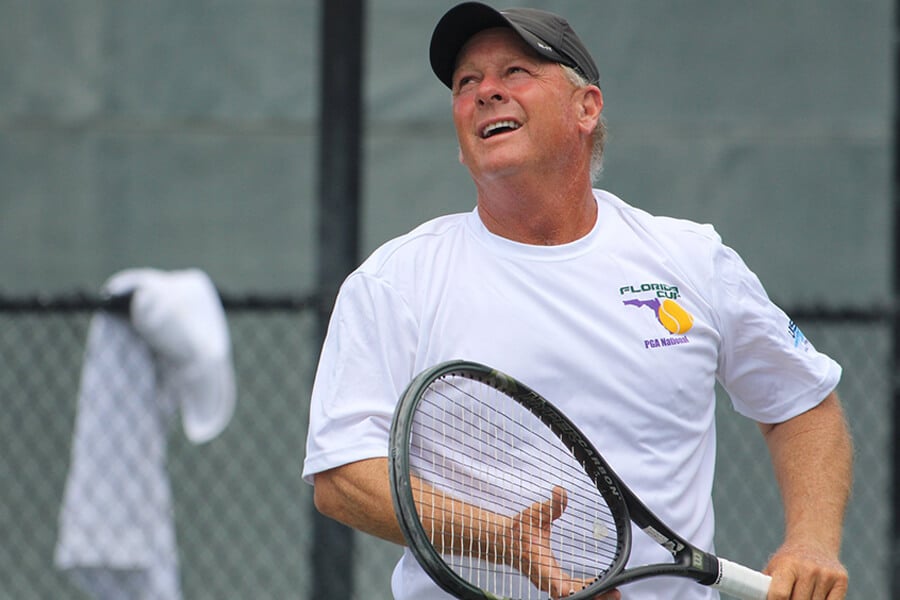 The left-hander reached a career-high international ranking of No. 2 in 2012, and is currently No. 5 in the world in the men’s 60s. He reached the No. 1 international doubles ranking in 2013. According to the ITF he is 167-23 career in international singles matches.

Congratulations to add the USTA Florida Award winners. For more information on adult and junior tennis playing opportunities in Florida go to www.ustaflorida.com/adult-tennis.