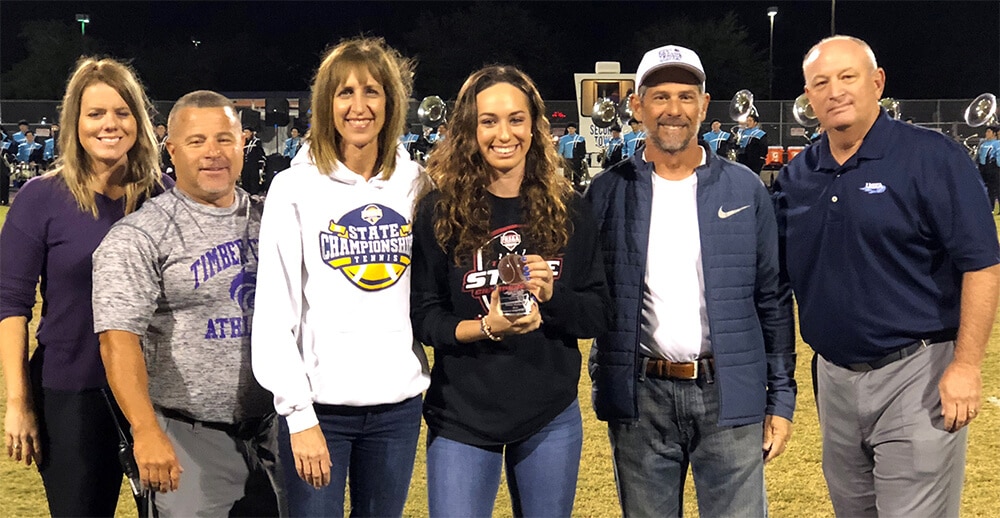 The legendary Chris Evert has some competition for the title of greatest female high school player to come out of the state of Florida.

Orlando’s Alana Wolfberg has put together one of the greatest female junior tennis careers over the last 40 years. Last month the Timber Creek High School senior was presented with the 2018 USTA Florida Female Jr. Player of the Year award on the field during halftime at a Timber Creek football game.

Wolfberg this year won a third straight state singles championship, tying Evert who was a three-time state champion in singles and a two-time champion in doubles for St. Thomas Aquinas High School in Fort Lauderdale from 1970-72. During those years Evert beat world No. 1 Margaret Court at a WTA invitational tournament in 1970, and in 1971 competed at the US Open.

“To go four-for-four as a singles state champion would be a huge accomplishment,” Wolfberg told USTA Florida. She will get the opportunity in the spring of 2019 in her final high school season. “I would be the first person in Florida to accomplish this. More than anything, I want to be able to accomplish this for Timber Creek and represent the school I love.”

She has since signed a National Letter of Intent to play for Oklahoma State, the 2016 NCAA team runner-up.

“Alana has represented the USTA Florida Section and the state of Florida in multiple junior team competitions nationally during her junior tennis career,” Hawkes said. “Congratulations to Alana not only for an amazing 2018, but for a stellar career while representing her family, her school and her state, and for being the very best of our sport.”

Wolfberg’s individual USTA results have been astounding. She is currently ranked No. 2 in Florida, only behind Whitney Osuigwe, who turned pro this year after achieving the world No. 1 junior ranking. She is a three-time winner at the USTA Florida “Bobby Curtis” Junior State Championships, capturing two singles titles in 2017 (Girls’ 18s) and 2016 (Girls’ 16s), and a doubles in 2014 (Girls’ 16). But rather than chasing ranking points or testing the pro ranks at lower-level tournaments, she has spent her formative high school years immersed in the “Purple People” experience at Timber Creek high.

“She motivates others in ways she doesn’t even realize,” says Timber Creek Athletic Director Jim Priest. “She leads the Purple People at our football games and big playoff volleyball games. Everyone follows her lead. With Alana’s drive, motivation, and sportsmanship, it just encourages other students to strive to be the best they can be. And when you have a caliber of player like Alana it’s good for all athletes as they get noticed and do not realize it.”

Over the years Wolfberg has provided plenty of opportunities to get everyone around her noticed as a dual-sport athlete. In May she simultaneously competed at the state tennis championships in Orlando, then the same day jumped in her car for the 2-hour-plus drive to Jacksonville to compete for Timber Creek at the state track and field championships.

“Competing for my school was the reason I played high school tennis,” she says. “I take great pride in going to Timber Creek, so being able to represent them and be a part of the amazing team is an honor. More team tournaments would be the best thing I believe USTA could include. It reminded me of how college tennis was going to be, and got me that much more excited for the future.”

The future will arrive in 2019 on the campus of Oklahoma State, but will have to wait for one more possibly record-breaking season of high school camaraderie.

“This gives players a chance to create new relationships,” she says of playing for her school. “To play for something bigger than themselves, and have some fun.”