An unseeded player punched through to claim a first state title in the Boys’ 18s, and another gained revenge for a former runner-up finish at the conclusion of the 68th USTA Florida “Bobby Curtis” Junior State Singles Championships, held June 11-15, 2016 at the Florida Tennis Center in Daytona Beach (18-16s divisions) and at Sanlando Park in Altamonte Springs (14-12s divisions). 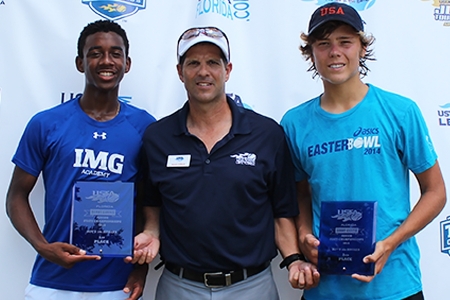 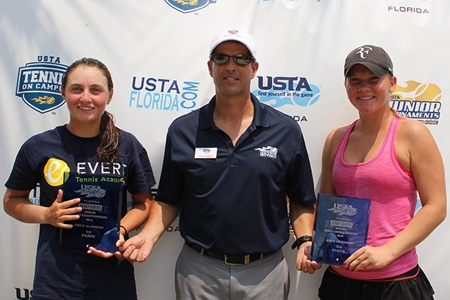 “I’ve been playing the ‘Bobby Curtis’ state singles for coming on 4-5 years, and this year I haven’t been playing a lot of USTA tournaments so I came in unseeded,” said Legall, who has been playing international juniors and pro Futures events, and for the last two years training at the IMG Academy in Bradenton. “I obviously wasn’t expecting to come out in first place. Congrats to Alek for having such a good tournament too.”

Legall, who has physically developed over the last year, says he never won more than two rounds in past state singles appearances.

“This year, I just didn’t lose,” said the demonstrative 17-year-old, who at match point told onlookers he couldn’t believe he put himself in position to win, and after clinching match point let out a scream of satisfaction. “So it was pretty good. All the hard work is finally paying off. I’m going to take a nice two days off, then back to training.”

The Girls’ 18s final saw a goal achieved for No. 8 seed Amanda Meyer of Delray Beach, who says she has dreamed of this moment ever since finishing runner-up in the 14-under division in 2013. She ground out a 6-1, 7-6(3) win in 90 degree humid temperatures against No. 2 seed Alexandra Belaya of Melbourne at the Florida Tennis Center.

“It was very difficult,” said the diminutive Meyer of solving the big flat-hitting Belaya. “Only at the end of the match did I figure out how to play her. [Her flat ball] was a little low for me and toward the end of the second set my legs started to wear out.”

The 16-year-old says that now she’s raised the trophy she can put her runner-up effort three years ago behind her.

“That has stuck with me the rest of my [junior] career, so it’s nice to win this finally,” she said with a smile. “It’s fantastic.” 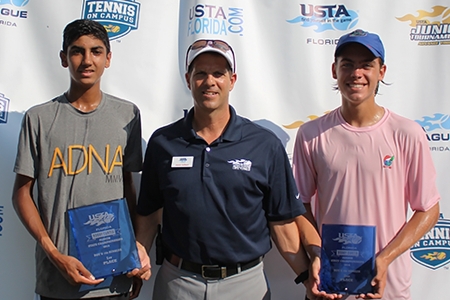 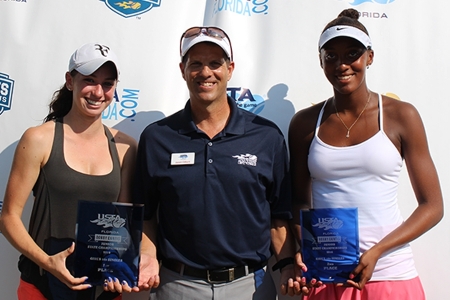 “Grey is a really good player who makes a lot of balls and he made me work,” said the 14-year-old Jachuck, a former hard court nationals runner-up. “Third game of the first set I got a break at love and he started to make more errors and I started to loosen up and relax.”

Jachuck said his toughest match of the tournament was a round of 16 win over Grey’s brother, No. 2 seed Harry Cacciatore, 6-3, 1-6, 6-4 on a day where temperatures hovered around 100 degrees. It was only his second “Bobby Curtis” appearance, last year losing second round to the eventual tournament winner. The rising sophomore, who is home-schooled and trains in Delray Beach, says he plans to play clay and hard court nationals this summer in addition to some international ITF events.

“Being the state championships, this is definitely one of my biggest wins,” he said.

The top seeding held in the Girls’ 16s final as exuberant No. 1 seed Alana Wolfberg of Orlando defeated No. 3 seed Imani Graham of St. Johns 6-1, 6-1, utilizing a heavy lefty forehand.

“I think at least half the games went to deuce,” Wolfberg said regarding the scoreline. “[My game plan was] completely nothing predictable, to not hit two shots the same way. I’ve known Imani for years, I hit with her two weeks ago and we’ve played doubles together. I went in knowing how she was playing.”

This year’s “Bobby Curtis” was a process of getting over the hump for Wolfberg, who had previously finished in third place at the state singles for the last four years in a row.

“Literally I have gotten third in this tournament since the 10s!” said the high school rising sophomore, who also runs track. “So yesterday [in the semifinals] I was like ‘This is the round, four years in a row,’ then I had a close first set and then won.”

Her next stop is national clay courts in Virginia, and “then vacation.”

The top seeds came through in the Boys’ and Girls’ 12s divisions, and the Boys’ 14s division was won by No. 11 seed Martin Damm of Bradenton, son of 2006 US Open doubles winner Martin Damm. 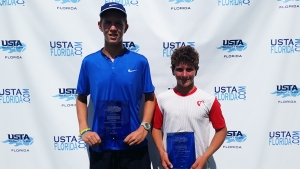 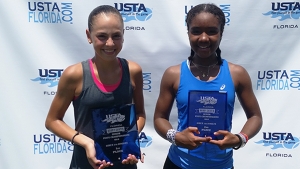 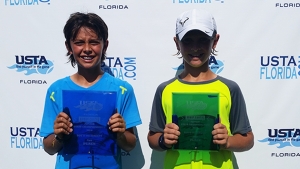 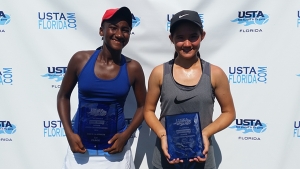