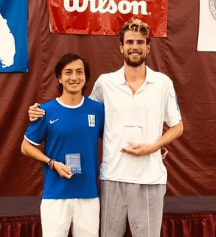 It’s was Cressy’s first ITF/USTA Pro Circuit singles titles after capturing eight doubles championships in 2018. With the win he is expected to crack the Top 500 for the first time on the ATP rankings. His two results prior to Tallahassee were a runner-up effort at the Futures circuit stop in Waco, Texas, and a semifinal at the Futures stop in Columbus, Ohio.

Arconada and Michael Geerts of Belgium won the doubles title as an unseeded pair, in the final beating unseeded Felix Corwin and Jacob Dunbar 6-3, 7-6(0).

The event also featured a toy/gift drive for the Christmas Connection of Northwest Florida, with all donations going towards children in the Panama City area that were affected by Hurricane Michael last month.

“USTA Florida is a proud sponsor of the Visit Tallahassee Futures tournament at Florida State,” said Bobby York, USTA Florida local adult play coordinator. “We are excited to see professional men’s tennis return to Tallahassee and for the opportunity to help those in the Panhandle affected by Hurricane Michael.”

With more than 90 tournaments hosted annually throughout the country and prize money ranging from $15,000-$125,000, the USTA Pro Circuit is the pathway to the US Open and tour-level competition for aspiring tennis players and a frequent battleground for established professionals.