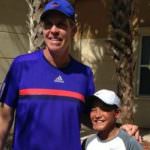 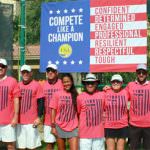 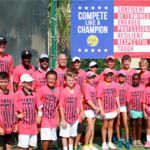 “Coaches were from the USTA Florida’s Coaches Commission, and it was two days of drills, match play, and seminars for parents and players,” said USTA Florida Player Development Coordinator Andy Gladstone.

Players in attendance (with coaches listed) were:

Kuzuhara was also named the Engagement Award winner during the camp.

The USTA Florida Coaches Commission is a partnership between the USTA Florida Section and the USTA national body to enhance coaching, junior development and programs, and junior tennis leadership in Florida.

Defending champion Robby Ginepri and American teens Frances Tiafoe and Jared Donaldson will be players to watch next week at the Tallahassee Challenger, where main draw play will begin on Monday, April 27 at the Forestmeadows Tennis Complex in Tallahassee, Fla.

Ginepri is looking to become the first champion to repeat in tournament history, while the 18-year-old Donaldson and 17-year-old wild card Tiafoe will look to make their mark at the last event on the 2015 Har-Tru Wild Card Challenge, the three-event circuit that will determine which American male players receives a wild card into the 2015 French Open main draw.

Also receiving a wild card will be Florida State University player Benjamin Lock, ranked No. 98 in the college standings. This month against No. 4-ranked Virginia, Lock upset No. 20-ranked Mitchell Frank 6-3, 6-4, the biggest upset for an FSU player since 2011.

“I was really pleased with Ben’s win against one of the best players in the country,” said FSU head coach Dwayne Hultquist. “[Frank’s] been ranked as high as No. 1 in the country and clinched the national championship for them two seasons ago. It shows the work that Ben has put in to continue to get better throughout the season.”

Players from 12 countries will be represented in the 32-player field, with four additional players into the main draw at the conclusion of the qualifying tournament.

“I am excited to see all the young Americans we have competing this year,” Tournament Director Karen Vogter said. “It is an opportunity to see some great tennis and hopefully some of the future stars of American tennis.”

The Tallahassee Tennis Challenger is a $50,000 event on the USTA Pro Circuit, contested April 27-May 2 at the Forestmeadows Tennis Complex. Players such as Jo-Wilfried Tsonga, Mardy Fish, James Blake, John Isner and Ryan Harrison have appeared at the event, which benefits the D. Mark Vogter, M.D., Memorial Endowment for the Neuro-Intensive Care Unit at Tallahassee Memorial HealthCare.

For more information go to http://tallahasseechallenger.com.

The Florida Gulf Coast University men won their first-ever Atlantic Sun men’s tennis conference crown this week with a 4-3 victory over the University of North Florida.

The Eagles locked up the championship when Ricky Ventura at No. 3 singles won 6-1, 6-4 against Julian Bradley to break a 3-3 tie.

“[It was his] first year of experience in college tennis and first time to be in that environment,” FGCU coach CJ Weber said of Ventura, speaking to the Naples News. “The theme we’ve been focusing on for our team all year and really emphasized this week was to ‘take it’ and ‘earn it.'”

FGCU was undefeated in A-Sun regular-season play. The NCAA tennis championships draw will be made on April 28 and begins May 8, with the Top 16 seeds hosting.

The FGCU women came up a match short of advancing to nationals when they fell in the conference final to UNF 4-1.

FGCU, which finished 10-12 for the season, put themselves in position for a major upset when they beat Stetson in the semifinals.

“The girls were very challenged in the finals today,” FGCU coach Courtney Vernon said. “UNF did a better job of stepping up on the big points.”

‘Try Tennis Free’ in May

The Tennis Industry Association in partnership with the USTA, USPTA and PTR, is launching “Try Tennis Free” in May, the campaign to get more players on the courts and into the game.

Industry research shows that 65 percent of players who begin tennis in introductory programming continue with the sport, and last year participating facilities saw an average of more than 30 new players take their courts during the month of May.

Free collateral for the campaign for clubs, facilities and organizations include logos, banner ads, flyers and advertisements.

To view the free collateral or download, go to www.tennisindustry.org/playtennis.

For more info or questions, about the Try Tennis Free campaign, contact the TIA at brian@tennisindustry.org or by phone at (843) 473-4504.

Montessori School of Pensacola to Debut Courts After $17K Grant 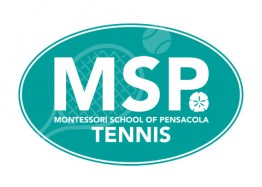 The Montessori School of Pensacola — with help from the USTA and USTA Florida Foundation — is expanding recreational opportunities for area children and the disabled.

The school will debut two new tennis courts on April 24, expanding its tennis offerings from a robust youth program to include play for seniors and the disabled. The courts, which were made possible by $17,000 in grants from the USTA and USTA Florida Foundation, are designed specifically for children aged 10 and younger with accompanying age-specific equipment for kids.

“We want children to have a positive image of tennis,” said USTA Florida tennis Program Coordinator George English. “Raising competitive players is not the goal in developing the skills in young children. We simply want them to continue to love tennis because it is a lifelong sport.”

English said the courts, besides benefiting students, will be an asset to the entire region.

“The closest 10 and under courts until now were in Jacksonville,” he said, “So this is something to be very proud of. We hope one day to find these courts in abundance — just like little league baseball fields.”

Tennis is a major component of physical education at Montessori, which also offers after-school and summer tennis instruction.

“These courts make sense for young children,” said Tricia Kruse, supervisor of after-school activities for the school, “Their perception and motor skills are different from adults. [The 36-foot courts] are like bumpers on a bowling lane or a lowered basketball hoop.”

Kruse says the school also intends to expand opportunities for senior players and the disabled, offering a Masters Tennis (adult short-court tennis) program in the fall for residents of the nearby Summer Vista Assisted Living Facility, as well as a Special Olympics tennis program.

For more information about the school visit www.montessoripensacola.com. 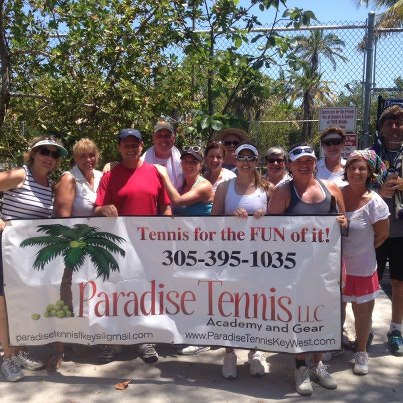 The Atlantic Condo Association in Key West and the YMCA of Central Florida in Titusville were announced this week as Florida recipients of USTA Facility Assistance Program grants.

The Atlantic Condo Association was awarded a $6,000 grant to support the resurfacing of two existing tennis courts at Paradise Tennis. The USTA Facility Assistance Program aims to support and provide communities access to safe, appealing and functional tennis environments.

“We are committed to enhancing and building more tennis facilities in communities across the country,” said USTA Chief Executive, Community Tennis, Kurt Kamperman. “This program allows us to assist in the development process of providing usable tennis venues to people of all ages, abilities and backgrounds to play and enjoy the health benefits of our great game.”

The YMCA of Central Florida was awarded a $10,000 grant to support the resurfacing of six existing tennis courts at the YMCA Tennis and Racquet Center.

Since 2005, the USTA has awarded these grants to support tennis facility enhancements, renovations and new construction projects to provide more and enhanced tennis venues for increased playing opportunities. In total, the USTA Facilities Assistance Program has built more than 38,000 tennis courts across the country in the past seven years, for all ages and abilities to enjoy the sport of a lifetime. In 2014, the USTA allocated more than $900,000 through the Facility Assistance Program to help support public tennis facility enhancements, renovations, and new construction projects.

A not-for-profit organization with more than 715,000 members, the USTA invests 100 percent of its proceeds in growing the game of tennis. It owns and operates the US Open, the highest-attended annual sporting event in the world. The USTA’s philanthropic entity, the USTA Foundation, provides grants and scholarships and helps under-resourced youth and individuals with disabilities, and supports wounded, ill and injured service members, veterans and their families. 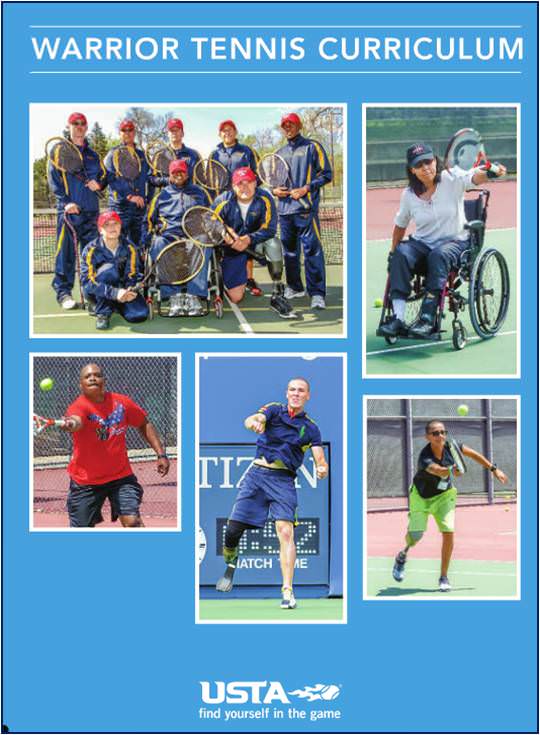 The national USTA Foundation, the national charitable organization of the United States Tennis Association, is partnering with the Department of Veterans Affairs to make tennis more readily available to VA patients.

The three-year partnership will include organizing tennis clinics for VA medical facilities, linking VA medical facilities with community resources, and providing consulting and design services for VA facilities interested in upgrading or building tennis courts. The USTA Foundation will support VA in the form of coaching, instruction, equipment, use of courts and other technical assistance needed to sustain a tennis clinic.

In addition, the USTA Foundation recently developed the Warrior Tennis Curriculum, an electronic manual that provides rehabilitation therapists, tennis professionals and volunteers guidance through text, pictures and videos on how to use tennis as a therapeutic option to help veterans stay fit and active. For more information on facilitating or starting a program, getting connected to a VA facility in your community, or to obtain a copy of the Warrior Tennis Curriculum, contact military@usta.com.

“The USTA Foundation is honored to partner with the Department of Veterans Affairs in helping to enhance and improve the rehabilitation needs of our country’s Veterans through tennis,” said USTA Foundation Executive Director Dan Faber. “We are committed to providing the tools needed for VA facilities around the country to incorporate tennis into their existing rehabilitation programs. Together, we are striving to provide an opportunity for our veterans to stay active and fit in tribute to their sacrifice and bravery.”