USTA Florida wants to send you to the ATP Delray Beach Open with a free Friday-Sunday weekend ticket package, including guided tours, premier parking and three meals, including lunch in the Players Center.

Win two reserved seats for quarterfinal play through the final, and more, by posting an original tennis-themed photo on Twitter, Instagram, or on the USTA Florida Facebook timeline, and include the hastag #Go2DelrayOpen in the post. The contest ends on Feb. 2 at 11:59 p.m., and a winner will be chosen at random on Feb. 3.

Travel expenses including hotel are not included in the prize package.

For full rules go to www.ustaflorida.com/go2delray.

Plan to Attend Kidz Day at the ATP Delray Beach Open on Feb. 20 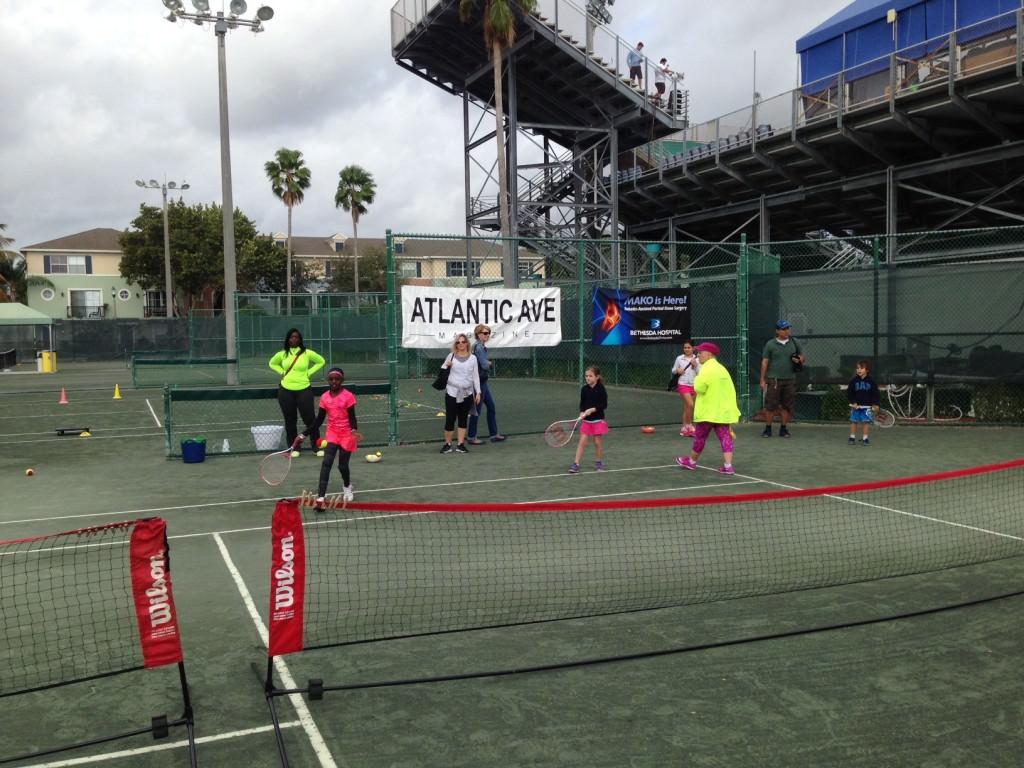 Plan now to bring your kids or tennis teams age 14-and-under to the 2017 Kidz Day celebration at the Delray Beach Open, an ATP World Tour event at the Delray Beach Tennis Center, on Monday, Feb. 20, from 8:30 a.m.-4:30 p.m. on the President’s Day holiday.

“It is sure to be a great holiday, school is out and tennis is in!” says organizer Janet Sprague of the East Coast Tennis Foundation. “The foundation is excited to be hosting this annual event again that brings tennis to children of all ages and skill levels. We will offer a variety of activities, including a games and activities court, complete with prizes for our youngest tennis stars, as well as matches for skilled youngsters, and entry to watch the pro matches.”

Parents and players can use their Kidz Day tickets to enter the stadium or watch other courts to catch professional match action during the day session. Tickets are not valid for evening matches. Kidz Day check-in will be in front of the main gate, and tickets can be picked up at the East Coast Tennis Foundation tournament table. No coolers, water bottles or backpacks are allowed inside the venue. Players may bring their own tennis rackets.

For addition event info e-mail eastcoasttennis@gmail.com or go to http://yellowtennisball.com/kidz-day, or to register for the event go to https://goo.gl/forms/kXFm4459JVkhgdv42.

Poland’s unseeded Katarzyna Piter completed a dream run at the $25,000 Orlando Professional Tennis Series USTA Pro Circuit stop at the USTA National Campus in Orlando on Sunday, in the final upsetting No. 3-seeded American Sonya Kenin 6-7(4), 6-2, 6-4 for the title.

Piter had to overcome doubles partner Paula Kania in the first round in three sets, and also upended the No. 6 seed en route to the final. In the semifinals she eased past American Elizabeth Halbauer 6-1, 6-3. Kenin in her semifinal came from a set down to beat Canadian qualifier Katherine Sebov 5-7, 7-5, 7-5.

Piter is a Fed Cup player for Poland who in 2013 won the WTA-level doubles title with Kristina Mladenovic at Palermo, in the final beating the Pliskova sisters. She is now 8-10 in ITF/USTA Pro Circuit finals, and Orlando was her first title since May 2015 in Italy. Kenin fell to 2-3 career in USTA Pro Circuit finals, her second runner-up effort in a row after Las Vegas in October 2016.

The doubles title was claimed by Americans Sophie Chang and Madeline Kobelt, who in the final upset top seeds Piter and Kania of Poland 6-3, 3-6, 10-6.

At the City of Sunrise Pro Tennis Classic, the $15,000 USTA pro Circuit stop in Sunrise, 2016 ITF World Junior Champion and qualifier Miomir Kecmanovic of Serbia won his first title, in the final upending No. 5 seed Christian Lindell of Sweden 6-2, 6-2. It was his ninth victory in 10 days after making it through the qualifying and main draw.

The 17-year-old in 2015 won the Orange Bowl, and last year was runner-up at the US Open juniors. Lindell, who has played Davis Cup for Sweden, fell to 3-8 in ITF/USTA Pro Circuit finals, his first in the U.S.

The doubles title was won by unseeded Peter Torebko of Germany and Bastian Trinker of Austria, who in the final beat unseeded Tomislav Brkic of Bosnia and Herzegovina, and Nikola Cacic of Serbia 7-6(3), 4-6, 10-7.

The USTA will showcase many of the country’s top college tennis programs and players as part of the 2017 College MatchDay series, both at the USTA National Campus at Lake Nona in Orlando and on several college campuses.

The schedule at the new Home of American Tennis is slated to feature six Top 15-ranked women’s teams, as rated by the Intercollegiate Tennis Association — including a rematch of last year’s NCAA finals (No. 4 Stanford vs. No. 5 Oklahoma State), and two Top 25 men’s programs. The series will also serve as a showcase of top American prospects, such as Ohio State’s Francesca Di Lorenzo, the No. 1-ranked player in the country, North Carolina’s Hayley Carter and Florida’s Brooke Austin.

The three on-campus MatchDays feature three Top 5 men’s programs, including a meeting between No. 1 Virginia and No. 2 Wake Forest, a match pitting the top-ranked collegiate singles player in Wake Forest’s Petros Chrysochos and top American prospect Thai-Son Kwiatkowski of Virginia.

“College Tennis is one of the four ‘pillars’ on which the USTA National Campus was built,” said Tim Cass, general manager, USTA National Campus. “Helping to grow the popularity of the game at the collegiate level is incredibly important to us, and so we’re eager to use the National Campus as a platform for some of the nation’s strongest programs and players.”