The USTA Collegiate Clay Court Invitational will feature some of the top Division I schools, including Florida schools Florida State, Florida Gulf Coast, Central Florida, Stetson, and the University of Florida battling it out on Nov. 5-8, 2015 at the ESPN Wide World of Sports Complex in Kissimmee, Fla.

“This is a great value,” says USTA Florida Competitive tennis Coordinator Andy Gladstone. “I’ve been to the event and it’s awesome. I really enjoyed the tournament site and watching the teams play.”

Adult daily admission tickets are $25 per day, or $75 for all four days. 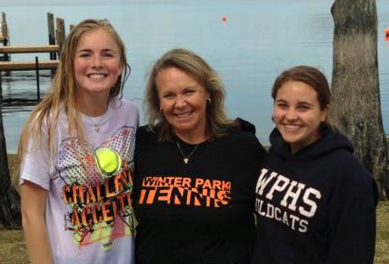 The United States Tennis Association (USTA) announced its 2015 No-Cut Coach All-Star Team, recognizing 12 exceptional middle- and high-school coaches throughout the nation who implement a “no-cut” policy, which welcomes all interested students to be a part of their school’s tennis team.

Cunningham said her inspiration for a no-cut program was provided by her high school basketball coach who kept all kids who participated in try outs on the team.

“My real hope with this award recognition is that many other high school coaches [will] encourage all players to be a part of the tennis program at their school and hopefully continue playing socially or competitively for many years to come,” Cunningham told the Orlando Sentinel at a past no-cut recognition. “Tennis is truly a lifelong sport.”

“These coaches play a critical role not only in the development of student-athletes throughout the year, but in the success of no-cut tennis and the sport of tennis as a whole,” Arrington says. “We are extremely proud of these coaches who foster inclusion and continue to help shape today’s youth into well-rounded student athletes.”

Since 2006, more than 4,000 tennis coaches nationwide have made a commitment to offering a no-cut policy, with some programs including more than 100 team members on a high school team. The coaches of these teams serve as positive role models and make a difference by spending the extra time and effort to ensure that young players experience the fun and fulfillment of playing tennis and participating in a school sport.

The USTA No-Cut Coach All-Star Team was established in 2013. Coaches are nominated by their respective USTA Section. To qualify for the USTA No-Cut All-Star Team, coaches must be currently implementing a no-cut policy on their tennis teams, and be currently registered with the USTA as a “no-cut” coach. Additionally, each candidate must have at least five years of experience coaching tennis.