The USTA has launched the free LGBT Tennis Network, a free social networking app that connects LGBT players like never before.

The goal of the LGBT Tennis Network is to help players find hitting partners and leagues in their area, register for local and national tournaments, help foster a sense of community among LGBT athletes, and more.

Check out the app in iTunes 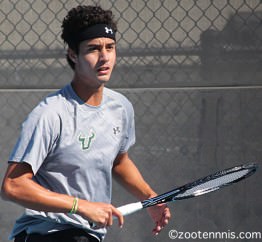 The University of South Florida men are heading to the NCAA Division I Team Championships Sweet 16 for the first time in program history after upsetting host Virginia Tech in the regional final last weekend.

The Bulls, ranked No. 18 in the country, overcame the 15th-ranked Hokies’ home court advantage to post a 4-0 victory. South Florida had defeated Mountain West Conference champion Boise State 4-0 in first round regional play in Blacksburg.

“It was an amazing day for the guys and all the work they’ve put in,” third-year head coach Matt Hill told USF writer Tom Zebold. “It’s a huge day for the program as well. We push the envelope and try to show other teams we’re a program that’s going to be around for a little while.”

The Bulls are led by junior Roberto Cid, who earned the program’s first All-American honors last year, reaching the quarterfinals of the NCAA singles tournament after upsetting top seed Clay Thompson of UCLA in the opening round. Cid, who has played Davis Cup for the Dominican Republic, trained in Florida as a junior at the Club Med Tennis Academy in Port Saint Lucie.

The American Athletic Conference’s two-time player of the year will again represent the Bulls in the NCAA singles championships later this month, with teammates Justin Roberts and Oliver Pramming qualifying for the doubles championships. Cid and Sasha Gozun of Sarasota are alternates in the NCAA doubles competition.

“Leading into competition, Roberto is feeling really good and he’s playing his best tennis of the season right now,” Hill told Zebold. “He’s worked really hard on his serve and spent a lot of time on his decision-making skills. That’s been really good to see this year.”

To keep up on results at the men’s tennis NCAA Championships go to www.ncaa.com/sports/tennis-men/d1.