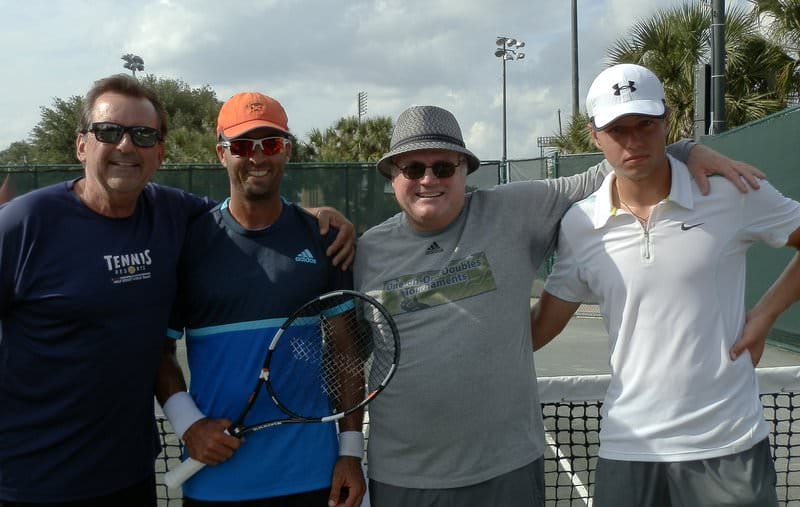 One-On-One Doubles is the half-court singles game played on the doubles court. All points are played crosscourt with the doubles alley included.

“I thoroughly enjoyed hosting the One-On-One Doubles at our tennis complex,” said Carlos Goffi, tennis director at ESPN Wide World of Sports. “The players, the band, the spectators — we all had a blast! Finally, some serve and volley tennis! Hallelujah! I look forward to hosting the next one!”

Barros in the semifinals defeated Stephen Moros 4-2, while Kalyuzhnyy in his semifinal beat Guilherme Jasmin 4-2.

“We had a live rockin’ blues concert, with top players competing for the $500 first prize,” said organizer Ed Krass. “The players and spectators were treated to live musical entertainment provided by Tampa’s Big D and The Dirty Deal. Sixteen players competed on four courts with two matches played per court. Each player competed against the other three players on their court. All matches are played first to win four games, with a tiebreaker at 3-3.”

The next event in the series will be the $1,000 Pinellas County One-On-One Doubles Shootout on Saturday, May 21, 2016 at Tarpon Tennis Club in Tarpon Springs, Fla. Divisions offered will be Men’s Open, Men’s 4.5 and Women’s 4.5.

The top 16 seeds are guaranteed to host regional play if a bid was submitted and criteria are met, and match-ups between conference opponents were avoided in the first two rounds of the championship.

First- and second-round competition takes place May 13-14 or May 14-15 and features four teams playing in a single-elimination format at a regional site. The winner of each site advances to the Case Tennis Center in Tulsa, Ok., where the 16 teams will compete for the women’s national championship on May 19-24, and the men’s on May 20-24.

The latter stages of the events will be hosted by the University of Tulsa. Here are the first-round match-ups for Florida teams: