Scheufler won 6 matches throughout the event to help her team to victory. 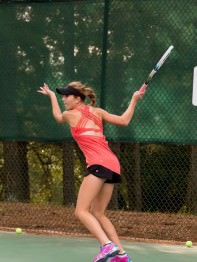 This team event consisted of six boys and six girls per team. There were two flights with six teams in each flight.

“This was truly a team effort as each round a different team member stepped up to clinch the match for us in dramatic fashion,” said team captain Weller Evans of Ponte Vedra Beach. “A great bunch of kids and a solid group of parents made the week fun.” 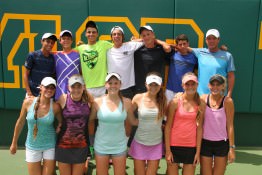 Barrientos reached the final with a 7-6, 7-5 win over another Argentine, Guido Andreozzi. Congratulations Nico.

Barrientos played for UWF from 2005-2008 and was an integral part of the 2005 NCAA Division II National Championship team.

The first-ever Level 9 USTA junior entry-level tournament will be held on Saturday, July 18, 2015 at Roger Scott Tennis Center in Pensacola.

The non-elimination tournament will run from 10 a.m. to 2 p.m. at the 28-court tennis center.

Tournament Director Rita Dotson hopes to get a good tournament at this first ever entry level event. 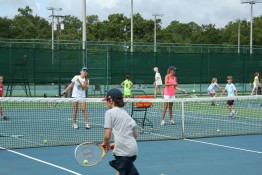 Everyone is moving at the Racquet Round-Up in Pensacola

The 38th Annual Racquet Round-Up presented by the Pensacola Sports Association (PSA) finished with events held on June 17 at the University of West Florida, and on June 18-19 at Shoreline Park in Gulf Breeze, Fla., with 500 kids participating in their first tennis experience.

All activities were free to the kids attending, and in addition to the tennis instruction there were other giveaways as well. 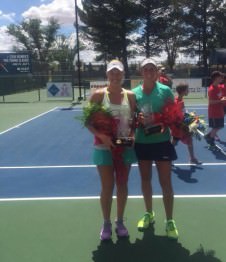 Guarachi and Brady, seeded #4, won both their quarter and semifinal matches in third-set tiebreakers as well. The win marked Guarachi’s eighth doubles title with eight different partners in the last two years.

Guarachi has now reached career ranking highs of 379 in singles and 203 in doubles.

Alexa’s next two tournaments are a $50K in Granby, Canada followed by a $25K in Gatineau, Canada.

Three 40 & Over 4.0 teams from Escambia County made the USTA Florida Sectional Championships held July 10-12, 2015. Although two teams had 3-1 records in round robin play, unfortunately due to the tiebreaking rules, none advanced to the final day of play.

The 4.0 women from Escambia County captained by Wanda Taylor missed the semifinals by only one win. Furthermore, the team they lost to 1-4 won the championship and in that 1-4 loss, Taylor’s team lost two third-set tiebreakers. It was so very close. That was their very first match of the weekend as well. Team members who played in Daytona included Renee Baggett, Constant Change, Traci Mason, Tammy Moore, Angela Stewart, Chantal Taylor, Wanda Taylor, Tonna Wheat and Debbie Wroten.

On the last weekend in June, the Pensacola Junior Team Tennis League held end-of-season matches and an awards party.

Tara Dominguez, league coordinator and promoter for USTA Florida, said “We had about 150 kids, and about six different schools and facilities represented (including Episcopal Day School, St Paul’s, Creative Learning Academy, Montessori Academy, Pensacola Country Club, Roger Scott). We’d love to get more of the public schools involved, and try to grow USTA Kids’ Tennis Clubs at all the schools and get them into the league. The league is for anybody. Today was a big success, even with it being summer. We had 12 courts full, which is great.” 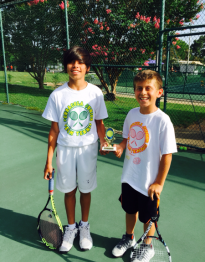 Winners for the Spring Season are as follows: