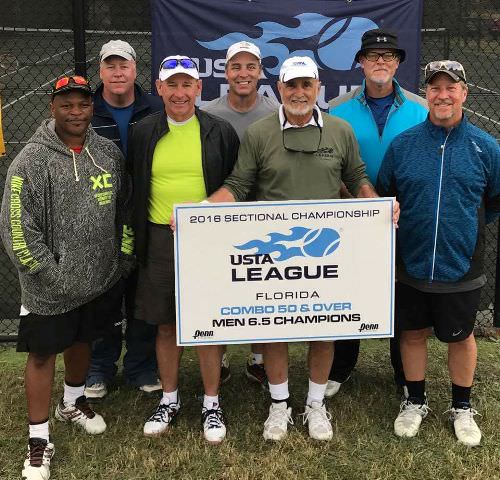 On Saturday, Dec. 10, 2016, the Escambia Men’s 50 & Over 6.5 Combo team won its fourth match without a loss to take the USTA Florida League Sectional Championship in Daytona. All four match scores were 2-1 and each of the three partnerships came from a set down to win a third-set tiebreaker for a team win.

In their third match against Alachua County, all three matches went to third-set tiebreakers.

The team, captained by David Del Gallo, plays on the clay at Roger Scott Tennis Center in Pensacola. It’s great to have a Region 1 champion again. 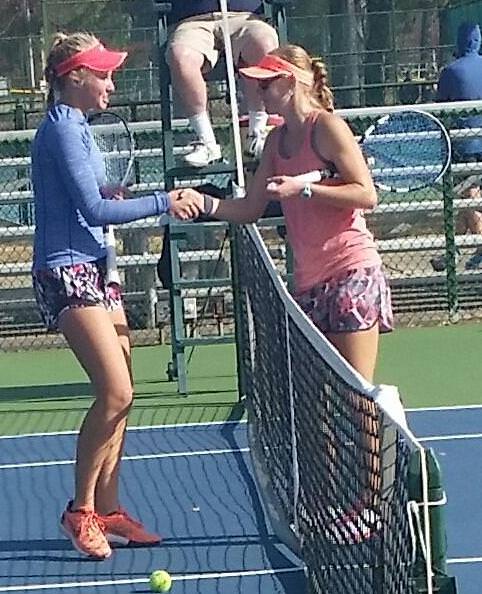 The Thanksgiving Holiday is the weekend for USTA National Selection and Open Regional Tournaments around the nation. Pensacola’s Patrick Ling played in the National Selection in Atlanta, Ga. Gulf Breeze’s Caraline and Collin Scheufler played in Open Regionals in Gainsville and Amelia Island respectively. Both players won a round. It’s tough to get into any national junior tournament. So, congratulations to all those four players.

Twenty-four Region 1 junior players traveled to the Treasure Oak Junior State Open Championships held Dec. 2-4, 2016 in Ocean Springs, Miss. Most of the main draw finals and the consolation semifinals got rained out.

The only championship for the area players came in the Boys’ 11 doubles where Pace’s Carlo Ghiglino and Madisonville, Louisiana’s Reece Beckendorf  defeated #1 seeded Eli Brown and Lucas Wrigley (Ocean Springs) 8-4 in the finals. Pensacola’s Sami Humeda and Victor Souza lost in the Boys’ 14 doubles finals 8-5. Pensacola Catholic High teammates Matthew Alliss and Kyler Frahm beat #2 seeds Cole and Slay Wagoner (Ocean Springs) 8-6 in the semifinals in the Boys’ 18 doubles but the finals got rained out.

Toys for Tots at Tops’L in Miramar Beach

Bicycles, toys, clothes and other essentials were among the items donated.

“We appreciate Staff Sergeant Meadows stopping by to thank us but more importantly to thank him for his service to our country!!!” said D’Aleo. 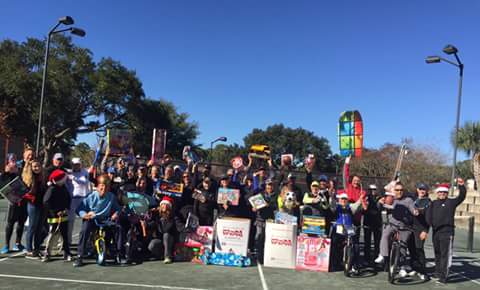 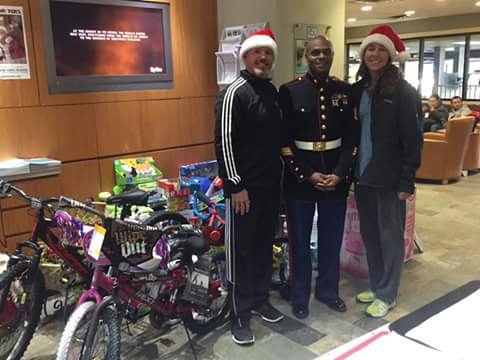 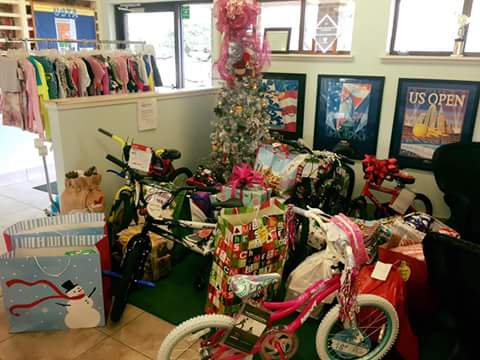 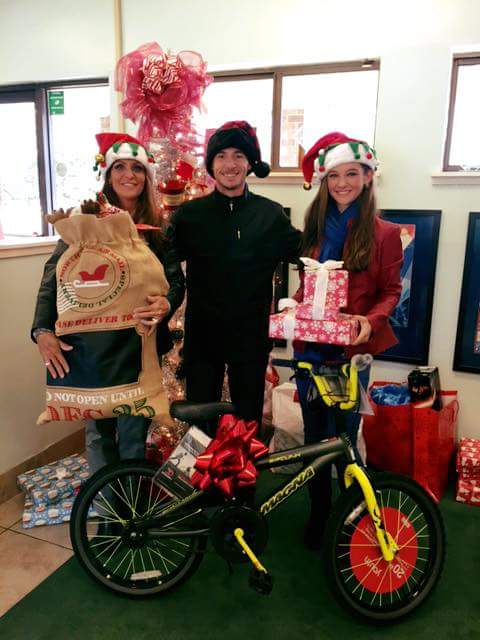 “I am so very pleased to say that the 2016 Roger Scott Angel Tree is complete!” said Pensacola Roger Scott Tennis professional Josh Koivu.

“After two days of deliveries, six car loads of gifts, and a whole lot of fun in between…26 angels will enjoy an exciting Christmas morning!!” he added.

Koivu continued, “I cannot say “thank you” enough to each and every person that had a hand in making this such a wonderful success! The Roger Scott family and the Pensacola community are absolutely incredible and I am thankful to be part of it! Many people were so kind and generous with their time, money, and/or support. One hundred fifteen Angel Christmas’ in three years DOES NOT happen without you…so THANK YOU and Merry Christmas everybody!!!”

Volunteer parent Christy Francis said, “Thank you, Josh Koivu!!! My children and I are BLESSED that you invited us to help deliver to these angels. Sarah & Alex learned so much and I appreciate the opportunity to teach them more life lessons and we LOVED seeing the faces of the parents and caregivers when we all drove up with Christmas!!! Great job coordinating all of this! You have a HUGE HEART!!! We are lucky to know you!!!!”

All the ladies doubles teams enjoyed four rounds of tennis as well as a light breakfast, snacks and lunch. Prizes were provided for the winners and Tennis-4-Everyone t-shirts for all. 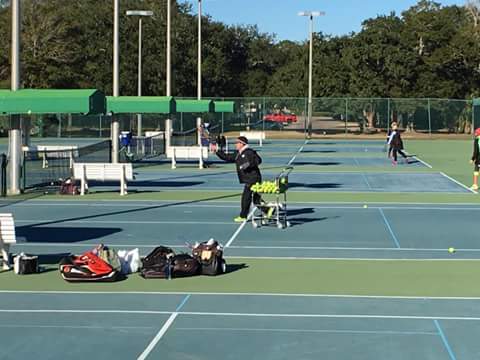 Players get a warm-up from USPTA Pro, Terry Thrash.

The tournament’s namesake, Larry Caton, passed away on Feb. 25, 2009. He grew up in Pensacola playing tennis from the age of 8 under the tutelage of his father, Dave Caton. In his later life, Larry was a tennis fixture at the Bayview Park Courts playing with anyone and everyone. Larry was the co-#1 (with James Shaffer) Boys’ 18 singles player in Florida. In 1959 at Tulane University, Larry was #3 singles player on the NCAA Champion Green Wave team that included Ron Holmberg and Crawford Henry. 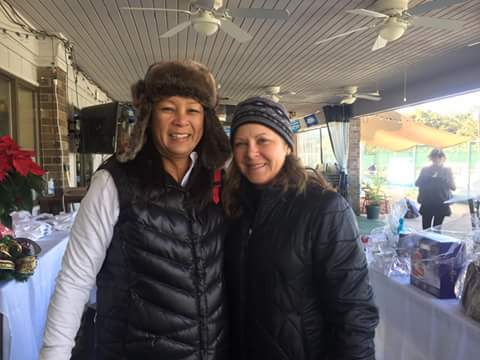 The players and volunteers at Larry Caton Memorial.


Tennis-4-Everyone, Inc. (T4E) is a local non-profit organization founded and directed by local USPTA Professional Rita Dotson, which provides FREE tennis lessons to area youth at community center summer camps. Each summer over 200 children are introduced to tennis. Many of these children would not have the opportunity for tennis instruction if not for this program. T4E also provides homework assistance and tutoring to the children attending the Fricker Center after-school program and FREE tennis instruction to the children attending Cobb, Gull Point and Fricker Centers during the school.

“Thanks to all our wonderful sponsors and big thanks to Bobbie Montano for helping this tournament become a success! We doubled our goal!!!” said Dotson after the event. The division winners are pictured below. 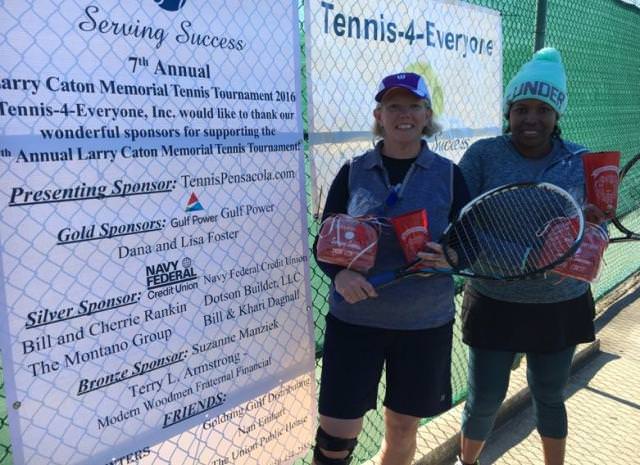 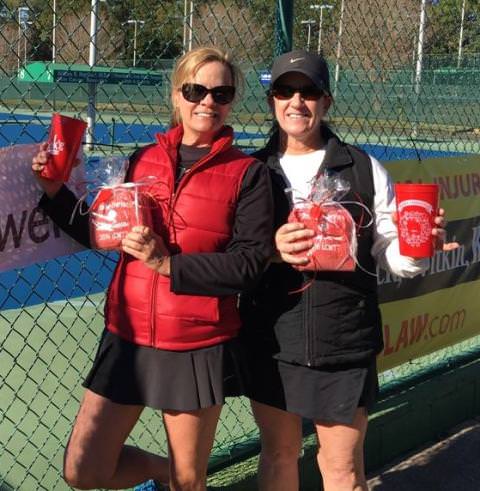 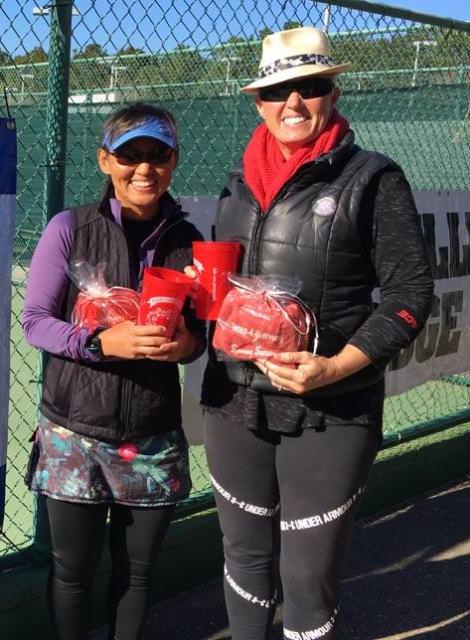 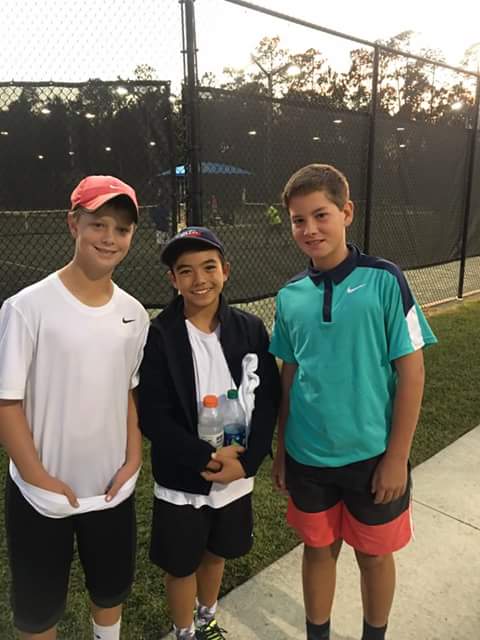 from left, Lyons, Ling, Meyering at Level 4 in Daytona.

Lyons won his first two rounds in straight sets before facing #3 seed Yair Gritzman (Boca Raton). The two battled in a wonderful three setter where Lyons prevailed in an upset 6-3, 6-7(1), 10-8. At one point in the second set, Gritzman hit a winner so hard that Lyons couldn’t get the ball out of the fence. Both boys laughed.

Lyons lost to top-seeded Alexander Adamec (St. Augustine) in the semifinals and also lost 6-2, 6-3 to the #2 seed Yannik Rahman of Miami. This may have been Justin’s best effort in his young career.

Patrick Ling of Pensacola and William Meyering also played in the Boys’ 12. 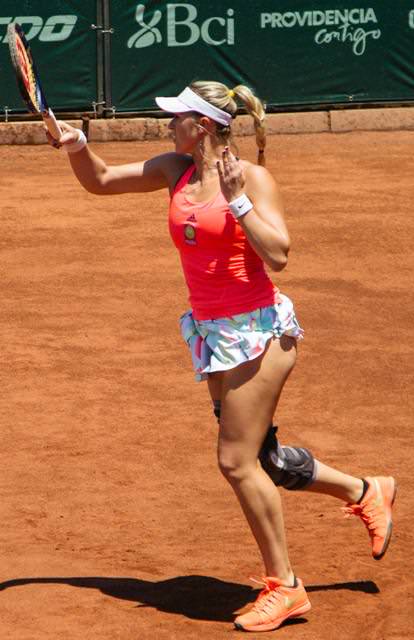 Guarachi played on the red clay in the $25,000 Copa Providencia BCI ITF tournament on Nov. 28 through Dec. 4, 2016 in Santiago Chile. Guarachi, who was in her third tournament since returning to the circuit after knee surgery, was unseeded in the event. She upset #5 seed Usue Arconada (Puerto Rico) 0-6, 6-3, 6-4 in a courageous comeback that involved a battle with her opponent and leg cramps.

Guarachi’s next two rounds were  straight-set affairs that allowed some recovery from the first round. In the finals, Guarachi lost to #2 seed Tamara Zidansek (Slovakia) in a terrific battle 6-7(4), 6-4, 6-1.

Said Alexa’s father and coach, Fernando Guarachi, “We went to Chile to get a match or two for Alexa and had great results.” 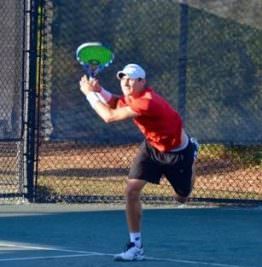 Will Spencer played the $25,000 Tallahassee Futures held Dec. 5-11, 2016 at the FSU Indoor facility in Tallahassee. Spencer was also unseeded in his event and won three straight set matches to reach the semifinals.

Both Guarachi and Spencer’s semifinal opponents went on to win the tournament. I’m sure these two results will be stepping stones to a strong showing in 2017.