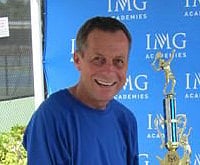 Behind the scenes, tennis volunteer Rick Workman has been a key architect in contributing to the development of junior tennis and the new junior development pathway in Florida over the past 10 years. On the frontlines, the Ormond Beach resident has directed some of the top junior and adult events in the state, and has lent his expertise to top-level events such as the USTA Florida “Bobby Curtis” state singles and doubles championships.

“I consider Rick Workman the Roger Federer of directing tournaments,” says USTA Florida Player Development Coordinator Andy Gladstone. “The guy is incredibly smart, yet so humble about himself. Additionally he really enjoys teaching people the trade and does not shun any question. Rick is one of the most outstanding people I have met in the tennis world.”

“My most meaningful contribution to USTA Florida has been in the junior tennis arena,” he says. “My passion for bringing together juniors for well-run, significant tennis competitions for 30-plus years has been enhanced through my volunteerism in Florida. On the Junior Council we implemented national and sectional standards to educate players, parents and tournament organizers about the competitive process and pathway. I have studied and assisted in organizing the tournament sanction process and schedule for the 750-plus annual Florida junior competitions and 350-plus annual requests for new sanctions.”

Workman has been in and out of Florida over a lifetime in the tennis industry that started after an outstanding junior and college tennis career. He had a 63-0 win-loss record in high school, and played collegiately for West Virginia. Out of college he accepted a full-time position at a tennis club in Chicago. Over the next 40 years his jobs took him to Texas, California and other locales, but he always seemed to come back to Florida.

In late 2013 he “semi-retired” from a position in California and returned to Florida to pursue volunteering and “other things in tennis,” he told TennisNews.net. “Tennis is a lifestyle for me, so I’ll always be associated with it in some way.”

“Rick has been invaluable to us with regards to running high-level junior and adult USTA Florida tournaments,” says USTA Florida Coordinator of Junior Competitive Tennis Ann Brown. “He has given us hours of his time at the tournament desk of the ‘Bobby Curtis’ and given us good advice about running these events. He also has been a valued member of the sanction and schedule team for many years.”

“I have enjoyed my involvement bringing the youth from around the world to ‘meet and compete’ in Florida,” he says. “As tournament director for the Eddie Herr and other international junior competitions, thousands of Florida juniors have had the opportunity to experience international competition.”

Workman currently consults for individual tennis clubs and organizes tournaments, including the Pan American ITF Junior Championships in Tulsa for the USTA, and the “Little Mo” Internationals in Florida, California and New York. He continues to live by his motto, “Just keep taking small steps and you will end up where you want to be.” As an aside he adds, “That will also help you with your tennis game, too!”

USTA Florida thanks Rick Workman for his volunteer dedication to Florida junior and adult events, for his devotion to assisting in developing a best-in-class junior development tournament pathway in Florida. 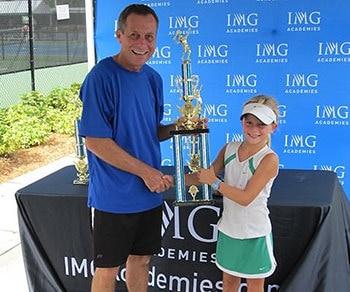 Favorite Food: “See-food, eat food — mom taught us four kids to like everything!”

If I could play tennis with three people, they would be…”I’ve been fortunate to play with a number of great players, personalities and duffers, but I’m still waiting for the invitations from Roger Federer, Gael Monfils or Rafael Nadal.”

When I am not playing tennis I am…”running a tennis tournament somewhere, working on a home or garden project for myself or a family member, or plotting and living my next ‘back country’ adventure!”

My best tennis memory is…”I have two very distinct tennis memories that make me smile every time the thoughts pop into my head: 1) Traveling to overnight tennis tournaments with mom and/or dad. 2) Seeing and experiencing the joy and passion of Eddie Herr talking about ‘Bringing the youth of the world’ together to play tennis in the USA! Eddie had a terrific impact upon my life and inspired me to continue with his legacy.”

I like to volunteer in tennis because…”Tennis has been a lifestyle for me since I can ever remember. Being with my family as a kid and parent, through juniors, college, professional coach, competition organizer, tennis director and senior player! Involvement in tennis has always given me a sense of purpose and joy. So why wouldn’t I volunteer? I’ll be around the courts until I figure out what to do when I grow up!”