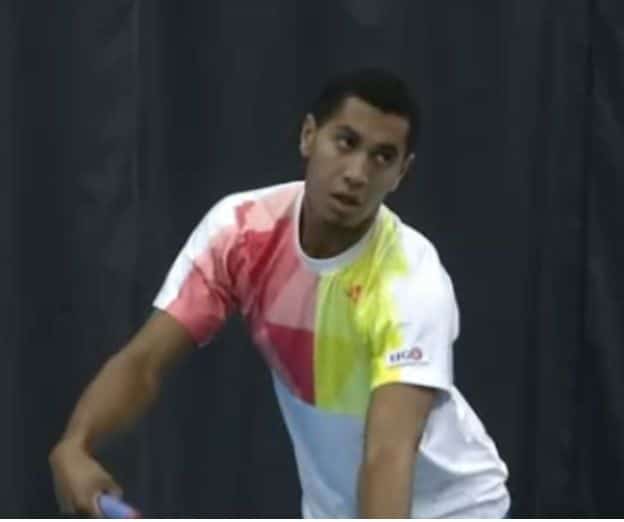 Bradenton 21-year-old Michael Mmoh on Sunday fell in the three-set singles final at the Atlantic Tire Championship, an ATP Challenger Tour $80,000 event in Cary, N.C., but rebounded afterwards to capture the doubles title.

In the semifinals Mmoh defeated fellow American J.C. Aragone 4-6, 6-2, 6-2, and Seppi in his semifinal likewise had to come from a set down to hold off No. 5-seeded Enzo Couacaud of France 4-6, 7-6(8), 6-4. In the final it was the first meeting between Mmoh and the 35-year-old Seppi, who entered the tournament at No. 77 on the ATP World Tour rankings. Mmoh also displayed his grit earlier in the quarterfinals when he came from a set down to beat fellow American and No. 2 seed Tommy Paul 2-6, 7-6(1), 6-1.

The week was a healthy boost to Mmoh’s stop-and-start year after a shoulder injury in January during the Australian Open that kept him off the court until the clay court season more than three months later.

Back where he belongs… After missing four months with a shoulder injury, @MichaelMmoh celebrates his first final appearance of the year in Cary. 👏 pic.twitter.com/ONwAi93Kv0

“It was super tough in my position just because I thought I really had a good year last year,” said Mmoh of the early-season injury, speaking to TENNIS magazine. “I thought I was hitting my strides: I was just getting into main draws of Slams, main draw of ATP events. I was main draw of Australian Open, Delray Beach, and New York, and I couldn’t really play those tournaments because of my shoulder.”

Mmoh is only three years removed from winning the USTA Boys’ 18s National Hard Court Championships in 2016 when he earned a wild card into the main draw of the US Open. Born in Saudi Arabia, his father played professional tennis representing Nigeria, and his mother is of Irish ancestry and an Australian citizen. He has long trained at the IMG Academy in Bradenton, Fla.

Mmoh dropped to 8-4 career in USTA Pro Circuit finals, while Seppi, who reached a career-high ATP World Tour ranking of No. 18 in 2013, improved to 10-3 in career USTA Pro Circuit/ITF finals. Seppi has additionally won three ATP-level titles at Eastbourne, the Serbia Open and the Kremlin Cup in Moscow.

After the singles final Mmoh took to the doubles court with partner and former University of Florida standout Sekou Bangoura, in the final defeating Treat Huey of the Philippines and John-Patrick Smith of Australia 4-6, 6-4, 10-8.