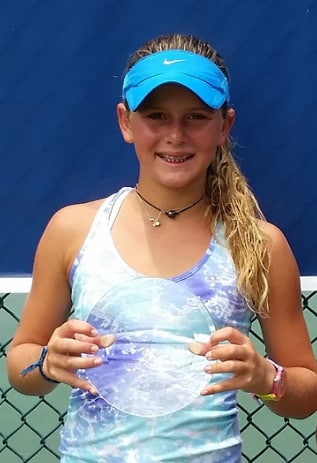 Last year Charlotte Owensby was one of only two top seeds to win in the various boys’ and girls’ age divisions at the USTA Florida “Bobby Curtis” Junior State Singles Championships, capturing the Girls’ 12s title.

She is used to the pressure of upholding a top seeding, and her first Florida state title in 2015 has made her hungry for more. She will return to the Florida Tennis Center this June to try and add more hardware to her trophy case.

“It was great to win the state championship last year. I had worked hard for many years trying to win this event, and I finally did it.” she said. “This year I will play either the 14s or 16s. My goal is to come back home a champion again.”

The 7th grader at Pine Crest School in Boca Raton is currently No. 1 in her age group and No. 3 nationally, according to the Tennis Recruiting Network. A tennis phenom from a young age, she made “Little Mo” history by winning the prestigious national tournament title five straight times starting in the 8-under age group, setting a new tournament record.

Last year she was chosen to participate in the USTA Girls Player Development Camp for players born 2002-04, and says she didn’t shy from the competition. She spoke with USTA Florida about her rise up the rankings, playing up, what it’s like to play your friends in tournaments, and avoiding bird poop:

You’ve been playing a lot of tournaments “up” in age groups this year. What is your strategy for playing different tournaments?

Owensby: I have been playing a lot of tournaments in higher age divisions. I normally play in the 16s or 18s for Florida Level 7 and 6 tournaments. In Level 5, 4 and sometimes 3, I play in the 16s. For National Level 2 and 1, I compete against my peers in the 14s. Playing up against physically stronger opponents forces me to move quickly and get comfortable with more power and spin. However, there is a special pressure of playing your age division that develops your mental strength.

What was your experience with the USTA Girls Player Development Camp last year?

The USTA Girls Player Development Camp was a great learning experience. I developed my game, and it was a great benefit to have my fellow peers all together for plenty of match play. I think we all need to work together and push each other in this type of environment much more often.

Who are some of your closest friends on the junior circuit?

I have developed tennis friendships across the country and around the world. I always enjoy socializing and catching up during down time at tournaments. We also use social media to keep up with each others’ lives, share jokes and have a good time. One of my very close tennis friends is Emily Callahan, who is also one of the very good young players my age. We are close friends but do have to play each other sometimes.

Is it tough to play against friends?

Some people think that it can be very hard to play your friends, but I just think that you have to give it your all and play your best. You try and forget who is on the other side of the net. The goal is to walk off the court best friends no matter the result. I know that pro players must face the same challenge.

What pro players are your favorites or inspire you and why?

I do not have a favorite pro tennis player at the moment. Every single player on the pro tour is great and had to work so hard to get there. You can learn something from everyone, and often I learn the most from watching unfamiliar players.

What is your coaching situation right now?

My coach is Yulia Beygelzimer, and our training is going great. I also work with coach Richard Ashby at USTA Player Development in Boca Raton. I really enjoy these sessions, and coach Richard coordinates with my coach to make sure we are all on the same page.

Have you and your older sister (Margaret, listed as a five-star recruit on Tennis Recruiting network) played any doubles together?

I have played doubles with my older sister Maggie but not recently, and we have won a few small titles. Now with me moving up and playing higher age groups, as well as some ITF events, we are planning on playing a lot more doubles together. We are a good team and complement each other. We train together and look forward to winning together!

You won the Girls’ 12s doubles at the Eddie Herr last year, which do you like better, singles or doubles?

Winning Eddie Herr doubles was a great experience and one of the best wins of my junior tennis career. I love playing the Eddie Herr and getting to compete against players from all around the world. It is such a great experience. I really enjoy doubles, but I do prefer singles. I like the freedom I feel playing singles and knowing that I am responsible for all the decisions and results.

What is the funniest thing to happen to you at a tournament?

A quick story, although not from a tournament. When I was much younger and practicing my serve, as I raised my hand in trophy position, bird poop landed right in the center. Always positive, I took this as good luck, although I do still duck and cover as the birds fly by.

The 2016 USTA Florida “Bobby Curtis” State Singles Championship, representing some of the best junior tennis players in the strongest of the 17 USTA sections across the country, will be held on June 11-15 at the Florida Tennis Center in Daytona Beach. To register or for more tournament info click here.