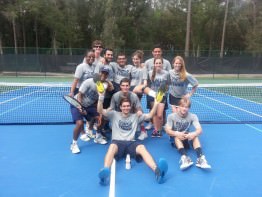 CLUBBING: The FAU tennis on campus club knows how to playfully raise a racket.

College tennis can be a lot more fun, and a lot less tense, with the advent of the Florida Tennis on Campus program.

Vastly different from collegiate tennis programs under NCAA auspices, it demands far less time from students, and is more about fun than just about winning. The fact that the collection of tennis players is called a club, with all the social associations tied up in that word, rather than a team, and all the competition and pressure associated with that word, speaks volumes about the program.

Florida Atlantic University (FAU) senior Savannah Koval, 21, who was an active tennis player at Coral Shores High School in the Keys in Islamorada, wanted to keep playing in college; but when she saw no club at FAU, she contacted Desirae McLaughlin, the USTA Florida Tennis on Campus coordinator, to learn how to form one. Some of her earliest members weren’t exactly on a fast track to tournament championships: One player, just before stepping on to the court for her first tournament, asked how to hold a racket, and how many bounces were permitted before she had to hit the ball.

But Savannah, as positive as she is energetic, was not to be deterred. Today, some 30 members comprise two to three teams at the two-day tournaments held at host schools. 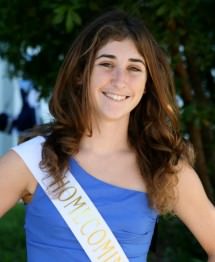 SAVANNAH: Like the Savannah that allows open space for trees, Savannah Korval allows for openness among her tennis club members.

According to Savannah, a few of her club’s players have varsity-level talent, but lack the time required to play for the team. The FAU club holds two-hour weekday practices that students attend based on their diverse class schedules. The school has risen from its very humble beginnings to rank number seven in the state among 14 participating schools.

“Seeing all these people come together and have so much fun is awesome,” she said. After serving her two-year term, she handpicked junior Alex Lema to serve as the next president, and “dragged her around everywhere” to learn the ropes.

Savannah spoke about Tennis on Campus to a room full of tennis enthusiasts at USTA Florida’s community outreach program in February in Ft. Lauderdale, telling them about the “family feeling” that exists in the club, and how “some of these people are now my best friends who I hang out with on weekends.” Friendships, she said, rather than rivalries, also extend to members of clubs from other schools. When the USTA shot a video about Tennis on Campus, they chose Savannah to be its star.

Her FAU team is also big on community service. They taught tennis skills to overweight Boca citizens who participated in the university’s Biggest Loser program to help them become more fit.

The season runs for six months. Points are awarded for victories, of course, but in keeping with the spirit of fun (and no pressure), they are also awarded for the recruiting of new schools to the program, community volunteering, and even participation for statewide conference calls, among other categories.

Tennis matches may start with love, but with Tennis on Campus, they also start – and end – with fun.

For more information on the Tennis on Campus program, please contact Desirae McLaughlin at (407) 963-1896, or email her at tennisoncampusflorida@gmail.com.