Serena Williams could have her first child any day now. Victoria Azarenka is back on tour after the birth of her first child. The WTA motherhood movement is stronger than ever, but can Serena come back and join the select list of Mom Grand Slam winners?

Serena in 2018 will be looking to join the list of players who had children then returned to the tour in Slam-winning form, including Margaret Court (Australian Open, French Open, US Open, all in 1973), Evonne Goolagong (1977 Aussie Open, 1980 Wimbledon), and Kim Clijsters (2009 US Open, 2010 US Open, 2011 Aussie Open). Former No. 1 Lindsay Davenport also returning to the tour after her first child.

New mothers and former Top 10-ranked players Vera Zvonareva of Russia and Patty Schnyder are also back playing tournaments, while a handful of other WTA players with children have returned to pro tennis. Surprisingly the ATP provides better child care for male players than the women’s tour, and Azarenka is at the forefront of trying to change that. “I have been already talking about this point to some of the people in WTA,” said the former No. 1, who had to miss the US Open due to a child custody dispute. “I’ll do anything to make that happen, because I think it’s really important.

The Next Gen ATP Finals, the men’s tour’s first-time showcase for players 21 years and younger, is shaping up to be must-match TV in November for fans of the future of the men’s game.

Two of those players were highlighted on Wednesday at the US Open when Croat Borna Coric upset Alexander Zverev, two players that will qualify for the year-end event, and Canadian upstart Denis Shapovalov beat Jo-Wilfried Tsonga. The Top 7 players 21-and-under on the ATP rankings will qualify, with one wild card allotted by the tournament which will be held Nov. 7-11 in Milan, Italy.

Jared Donaldson is the leading American in the race to qualify at No. 4, while hoping to surge at spots No. 9-11 are Americans Frances Tiafoe (who stretched Roger Federer to five sets in the first round at the US Open), Ernesto Escobedo and Taylor Fritz. “Every player wants to make it,” Donaldson said. “It’s a really tough battle here down the stretch. There are honestly 15-20 players who are worthwhile and deserving of making it.”

Roger Federer blew some minds on Wednesday at the Central Park tennis courts, dropping in for a practice session…What happened when a USTA League player took performance enhancing drugs like a recent former No. 1 was penalized for as an experiment? “I told as many people in my league as I could that I was taking meldonium, both so I could ascertain whether or not it was banned, and to see whether they’d think I was an a*****e for taking it.”…At the Western & Southern Open in Cincinnati prior to the US Open, the men’s winner took home almost double the women’s winner in prize money…The USTA gave Italian Roberta Vinci a replacement US Open finalist trophy after her’s was stolen from her home…Roger Federer makes nearly $60 million a year from endorsements alone, the most of any athlete…After the US Open, Angelique Kerber, who finished last year No. 1, will drop out of the Top 10 on the WTA rankings…ESPN commentator Patrick McEnroe will run this year’s New York City Marathon in November on behalf of his older brother John’s charity, the Johnny Mac Tennis Project…The player goodie gift bag for US Open players includes a choice of a Tiffany sterling silver bracelet or a sterling silver money clip, a Nordstrom gift certificate, Bose earbuds, a choice of a cashmere throw or travel blanket, Smith sunglasses, a Diptyque candle, ShedRain Umbrella, cosmetics from Le Labo, Fresh and Malin + Goetz, and Sugarfina gourmet candy, and a a Grey Goose Honey Deuce kit, tallying around $1,500.

Here are the upcoming American match-ups in Flushing Meadows: 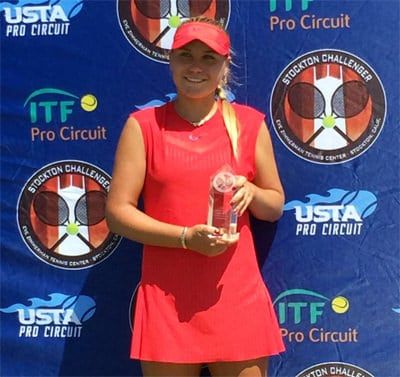 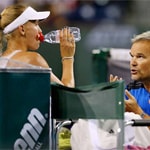 “If the player can’t figure out how to win on her own, then she should lose.”
— Tennis Channel commentator and former player Mary Carillo on the argument for implementing on-court coaching at the US Open

“We gave hugs after the match and had lunch. Then, two hours later we went out and won doubles.”
— Boca Raton high schooler Angelica Blake after beating friend and doubles partner Nikki Redelijk in the singles final of the USTA National Girls’ 16s National Hard Courts, speaking to the Sun-Sentinel

“Behind all these Swarovski crystals and little black dresses, this girl has a lot of grit and she’s not going anywhere.”
— Maria Sharapova assessing herself after beating No. 2 seed Simona Halep in the first round of the US Open