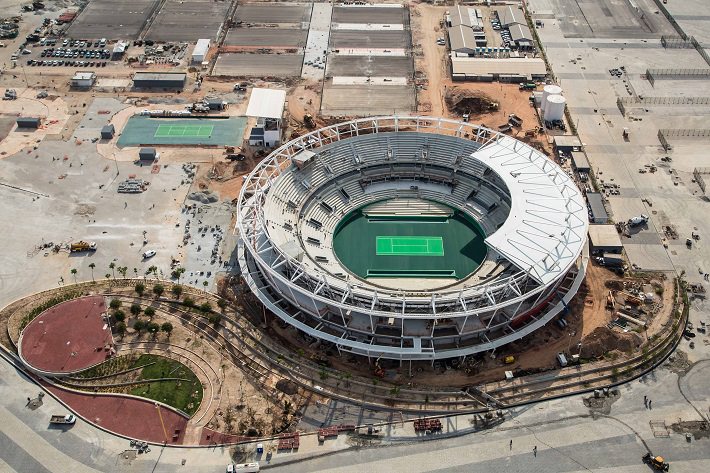 Sandwiched between the ATP/WTA Canada and Cincinnati events, and held three weeks prior to the US Open this year, the Rio Olympics tennis event on Aug. 8-14 is on the minds of top players — and their country’s tennis federations. Roger Federer is pumped for his chances at mixed doubles gold with fellow former No. 1 Martina Hingis, while Tennis Australia is having a hard time even getting an Olympic commitment out of top stars Nick Kyrgios and Bernard Tomic. In singles the Top 56 on the rankings will receive direct entry, but there is a max of four players per country — which could see the U.S. men with less than four players in singles. And can Serena and Venus Williams win a fourth women’s doubles gold in what will likely be their last Olympic games? And which American man will get to play mixed with Serena, which will undoubtedly be a potential fast track to a medal? The Rio Olympic Tennis Centre, with its stadium court and 16 hard courts, is in close proximity to the Olympic Village, and after the Olympics the complex will retain nine of the courts and become one of Brazil’s new training centers and a major tennis competition venue. The Olympics ain’t cheap, as the Tokyo 2020 organizers report — their projected costs are already six times what they thought, at $15 billion and climbing. Trivia: besides the Williams sisters winning women’s doubles gold, how many other medal winners can you name from the last Olympic tennis competition in 2012? 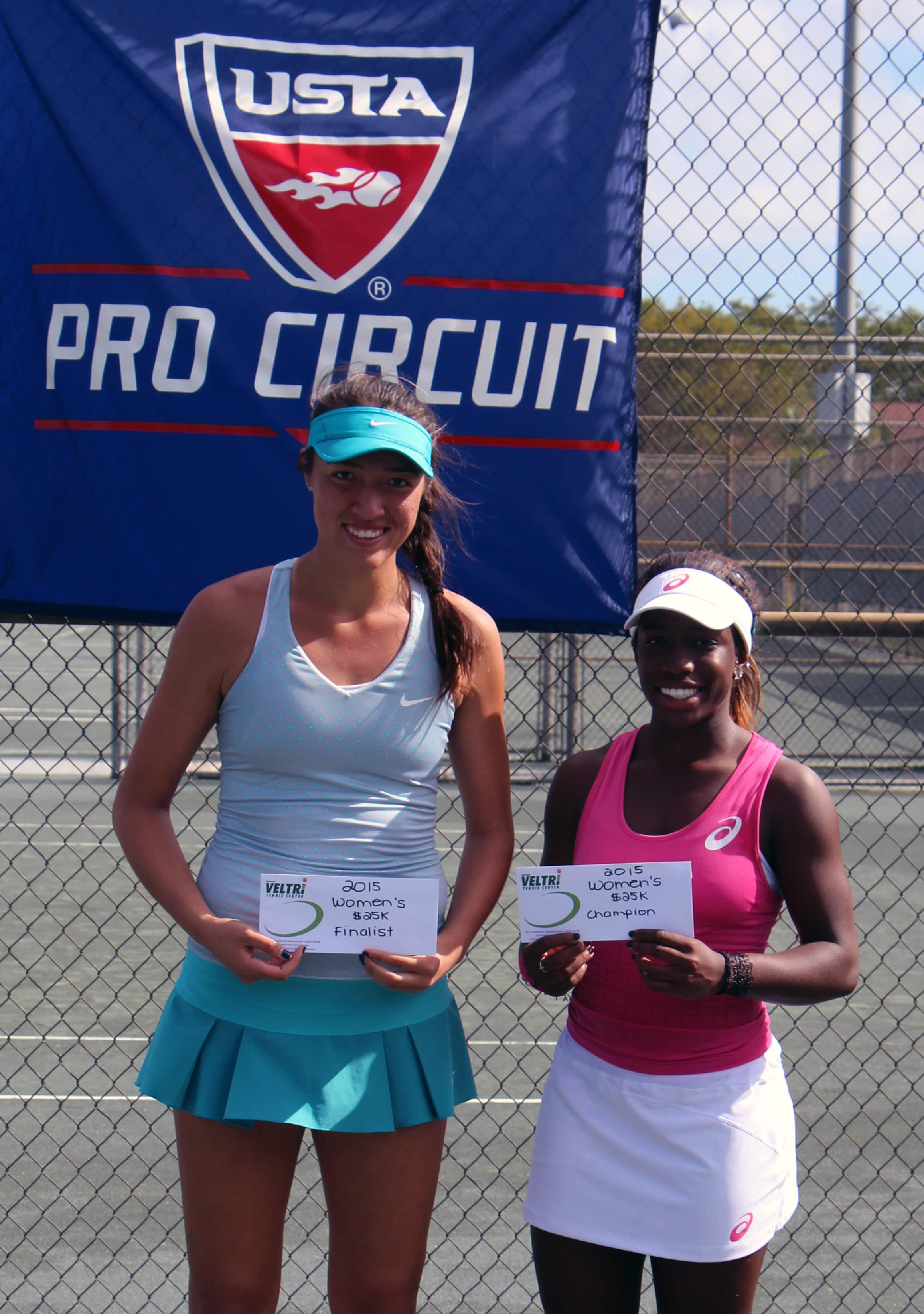 Samantha Crawford of Tamarac/Boca Raton, Fla., has been putting fellow players at the USTA Pro Circuit level on notice over the past 12 months, and this week she raised some eyebrows at a WTA tour event in Australia. Ranked No. 142 this week entering the Brisbane International, the 20 year old qualified, won her opening round, in the second round upset No. 7 seed Belinda Bencic 7-5, 7-5, and in the quarters powered past former Top 10er Andrea Petkovic 6-3, 6-0 before falling 6-0, 6-3 to former No. 1 Victoria Azarenka in the semifinals. Crawford, who grew up idolizing Venus Williams and Maria Sharapova, at 6-foot-2 has the same body type and big serve to power opponents off the court, and in a little over a week’s time she will debut that power at the Australian Open. Crawford will be making her debut in the Melbourne main draw after last November securing a wild card by winning the USTA Pro Circuit Australian Open Wild Card Challenge series of tournaments. The US Open girls’ champion in 2012, Crawford also won last year’s USTA Pro Circuit US Open Wild Card Challenge to earn a wild card into the 2015 US Open main draw, where she lost first round to fellow American Irini Falconi. As when she won the US Open girls’ title as an unseeded player, after a confidence-building win over the world No. 14 Bencic, Crawford looks poised to again launch a sneak attack on the competition. 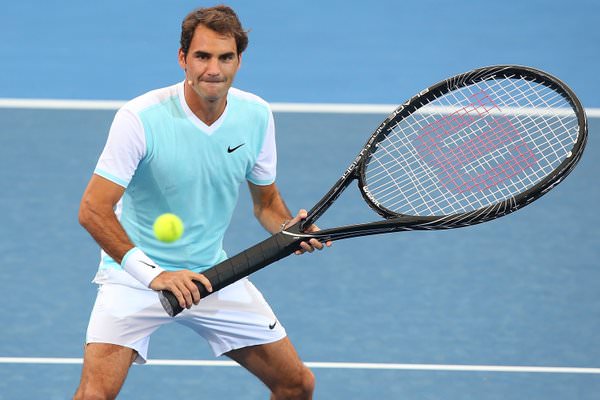 Eugene Sterns, the lawyer for the Miami Open, says the tournament will be moving, “the only question is when.” According to the Associated Press, Orlando, South America and China are possible relocation destinations…Five of the Top 6 players on the WTA tour pulled out of matches this week, the opening week of the season, with four citing injuries and one illness: No. 1 Serena Williams (knee), No. 2 Simona Halep (Achilles), No. 3 Garbine Muguruza (foot), and No. 4 Maria Sharapova (forearm)…While the Florida-based Bryan brothers are both now married and live apart, they Facetime each other every morning they are apart, according to Tennis magazine…The national USTA Foundation named the Bryan brothers and journalist and news anchor Katie Couric to its Celebrity and Player Advisory Council…Though he played through the after-effects of an illness, Roger Federer won his first match of the year on Thursday, then lauded new coach Ivan Ljubicic. “He knows everybody. He is also a dad. He still plays very well. He’s played against most of my opponents. He’s played me a bunch and knows my game very well. He’s now also been a coach for a couple years, which I thought was important.” 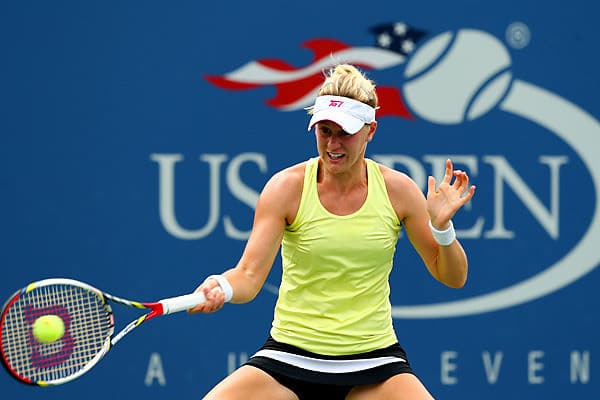 The unseeded Riske is in the final at the Shenzhen Open after today downing fellow unseeded player Timea Babos 6-2, 6-4. In the final she will meet top-seeded Aggie Radwanska.

“It was definitely a tough match for me,” the No. 97-ranked Riske said of the semifinal. “Babos is a great competitor and a great player, so I had to be there on every point, and I’m excited that the match came out in my favor in the end. I’m also excited to be in the final — it’s a great start to a season to reach a final.”

Radwanska beat Riske in their only previous meeting last year at Indian Wells.

In Auckland, Stephens led Caroline Wozniacki 5-2 when the match was stopped for the day due to rain at the ASB Classic, to be completed on Saturday. The winner will meet German Julia Goerges in the final.

The American qualifier Crawford, who calls Tamarac, Fla., home and trains in Boca Raton, was beaten in the semifinals of the Brisbane International 6-0, 6-3 by former No. 1 Victoria Azarenka. Crawford during the week among others upended world No. 14 Belinda Bencic and former Top 10er Andrea Petkovic. 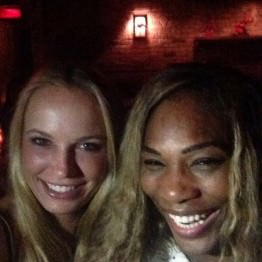 “She sings great karaoke. She’s a great cook. She says she doesn’t like sweets, but she also steals my sweets when I have them lying around.”
— Caroline Wozniacki on buddy Serena Williams, speaking to CNN

“Under the circumstances, this has become a hostile environment to conduct business.”
— Miami Open lawyer Eugene Sterns on the tournament being denied an expansion plan by local county government, speaking to the Miami Herald

“We’re both big [Andre] Agassi guys. We posterized our walls and cut out every picture. If he lost to [Pete] Sampras, we would cry.”
— Mike Bryan on his and brother Bob’s favorite player when they were kids, speaking to TENNIS magazine