Next week’s Davis Cup World Group tie featuring the U.S. at Great Britain will feature a number of storylines: 1) a rematch of last year’s first-rounder where the Brits toppled the Americans in San Diego; 2) a World Group home match for Britain (in the Murray’s Glasgow, Scotland) for the first time in 16 years; and 3) a likely Bryan brothers (Bob and Mike) vs. Murray brothers (not Bill and Brian Doyle, but Andy and Jamie) match-up. The brothers have faced off only once, with the Bryans winning on clay at Monte Carlo in 2012. Next week’s tie will be played on indoor hardcourt. Andy Murray said Davis Cup with his brother will be more relaxing than a regular ATP event, where he feels the pressure of potentially hurting his brother’s pocketbook. “I do feel a lot of pressure when I’m playing with [Jamie] in tour events, just because if we lose in the first round, he doesn’t make any money or a living that week, really,” Andy says. “He will lose money. So I get nervous in those events.”

How about playing an entire tournament in a day, or even a half day? Depending on the number of entries, the new Florida Tiebreak Tournaments are half-day or one-day events, perfect for getting an intense amount of tennis in without taking up an entire weekend. A Tiebreak Tournament usually takes approximately 4-5 hours to complete, and like regular tournaments include seeds and draw sheets (main draw and consolation), but matches are best of three tiebreaks. Tournament directors have the discretion of playing standard tiebreaks or 10-point tiebreaks (first player to 10, win by two). The events are not meant to replace conventional tournaments, but to offer an alternative. USTA Florida is also working on a Tiebreak Tournament ranking system to “tie” (get it?) the new format of events together. 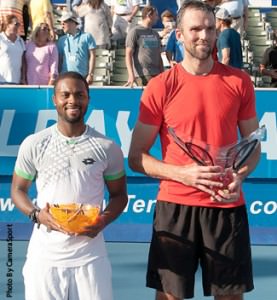 Two records were set at the 2015 Delray Beach Open last weekend when Ivo Karlovic captured the singles title and the Bryan brothers won the doubles. Karlovic, 0-4 in finals last year, beat American Donald Young in the championship to become the oldest title winner in the ATP World Tour era (since 1990). The Bryan brothers, Bob and Mike, defeated Leander Paes and Raven Klaasen in the final to win their record 104th career title as a team, and their fourth in Delray Beach. “It’s nice to win a title so close to home,” said Bob who lives in Sunny Isles Beach, Fla. “Mike and I had great support all week from the South Florida tennis fans, and it made a difference during this run.” The brothers had golf legend Jack Nicklaus and his wife Barbara rooting for them in their box during the week. Next week the twins take their talent to Glasgow to represent the U.S. in Davis Cup against Britain, then to the U.S. spring hardcourt events at Indian Wells and Miami.

On Friday she will meet fellow former No. 1 Victoria Azarenka, who on Thursday had little trouble with another former No. 1, defeating No. 3-seeded Caroline Wozniacki 6-3, 6-1. The other semifinal will see unseeded Lucie Safarova take on No. 9 Carla Suarez Navarro.

In Acapulco, American qualifier Ryan Harrison kept his roll going on Thursday with a 4-6, 7-6(0), 7-6(4) upset over No. 6 seed Ivo Karlovic to move into the semifinals at the Abierto Mexicano Telcel. Earlier in the tournament Harrison logged his first career Top 10 win by upsetting Grigor Dimitrov.

Harrison in the Friday semis will meet grinding No. 2 seed David Ferrer. The other Friday semifinal in Acapulo will be top-seeded Kei Nishikori against No. 4 seed Kevin Anderson.

“I have played for so long and I think by winning it I can finally do whatever I please, to be quite honest.”
— Roger Federer on skipping Davis Cup for Switzerland in 2015

“I think at this level the younger body doesn’t help, per se. Everybody out here is ready to go. If you’re here and you’re playing this deep, it means that you’ve done the work and you’re fit.
— 34-year-old Venus Williams

“I actually asked him, ‘Do you think I can sprint?’ He said, ‘No.’ I thought, I think I have a good sprinter’s body. He’s like, ‘No.'”
— Serena Williams on hanging out with Olympic sprinter Usain Bolt