Florida’s ‘Dempsey Twins’ Split Up, Come Together Through ‘Tennis on Campus’ Clubs 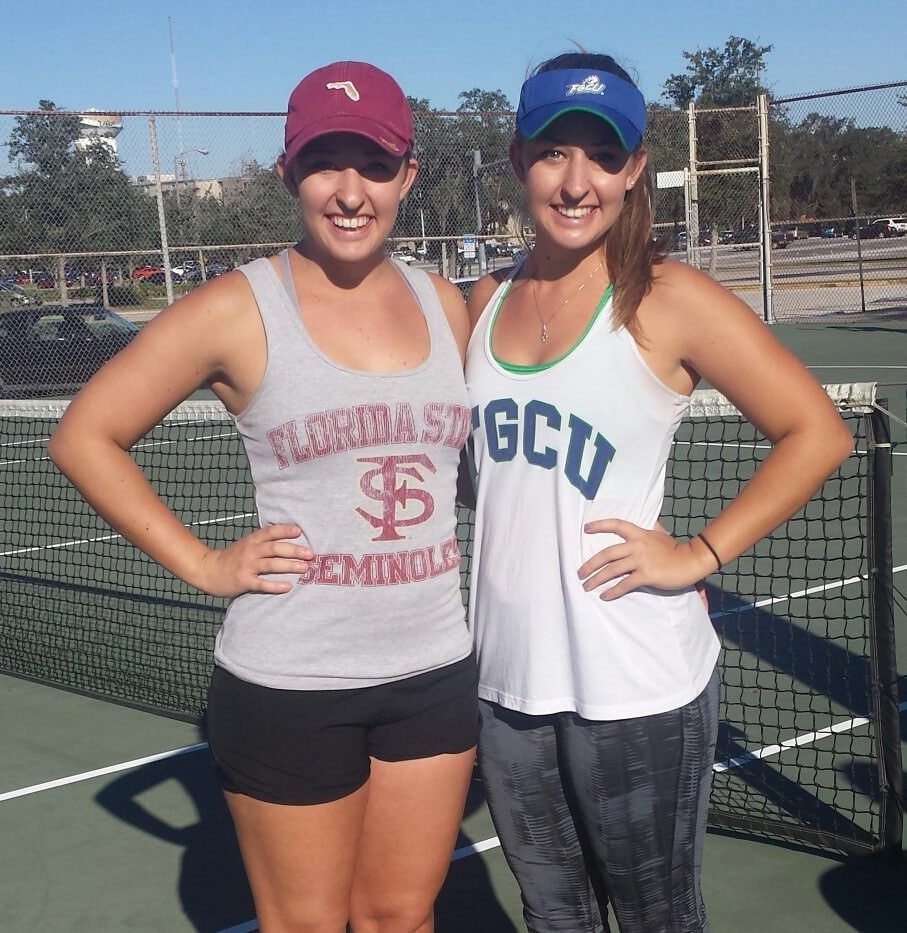 From left: Erica and Laura Dempsey

The “Dempsey twins” attend different Florida colleges, have pursued different majors, even pledged different sororities — but that hasn’t stopped them from this school year achieving a twin feat — each rising to president of their respective school tennis clubs.

Erica at Florida State University, and Laura at Florida Gulf Coast University each preside over their respective clubs that compete at the USTA Florida ‘Tennis on Campus’ series of tournaments throughout the school year. The sisters, from Venice, Fla. (south of Sarasota), decided prior to their college search that, since Erica wanted to pursue a marketing career and Laura criminal justice and political science, they would not pick a school just for the sake of staying together.

Regardless, the twins’ leadership skills and love of tennis have brought them to similar places as their junior years approach an end this spring.

“I am very grateful for separating because it gives Laura and I a chance to grow as individual adults,” Erica said. “I also can’t imagine getting through any of the struggles in my life if she wasn’t right there on the other end of the phone every time to talk me through it.”

USTA Florida caught up with the twins to discuss playing for and running a college tennis club, funny twin stories, and who to turn to when your car gets towed (and your sister isn’t there).

What was your path to becoming president of the tennis club?

Erica: I very much did not set out to become the leader of anything as a freshman. I remember going out to the first club practice with my roommate at the time, Ansley Rice who is now an officer of the team, and expecting overly-competitive players that were significantly better than me. I was lucky enough to join the year a lot of incoming freshmen, good players, got there. They were all so sweet and fun and at my level,  I immediately loved the whole environment. As a sophomore I became to secretary of the club, not a very defined role, but I always injected myself and tried to be as involved in club affairs as possible. Then [president] Sam Roy was graduating and I knew I wanted to take over to hopefully offer other freshmen the great experience I had.

Laura: Freshman year I was at every tournament I could possibly go to. Sophomore year I became secretary for my club and got a glimpse of all the ins and out of how the club ran and how much effort was actually put into making everything run smoothly. However, I’m not sure anything actually prepares you for having the full responsibility of the club and all its members riding on you. The key to becoming tennis club president is loving what the club has to offer and wanting to provide that experience for other students, because it is not an easy job. However, it is one of the most rewarding things I have ever done in my life.

What led you to choose your school?

Erica: I very much was drawn to FSU from the first time I was there in 8th grade. I loved what the school had to offer in many aspects. For a long time I didn’t know what I wanted to study, so FSU being a strong school for many fields was appealing. I was also drawn to the traditions that came with a large Greek community and big football team. Also I knew I wanted to get away from my hometown, so the five-hour drive to Tallahassee seemed to do the trick.

Laura: Between all the schools we were interested in, we toured about 12 universities, some in and out of Florida. FGCU was one of the last ones we went to, and for me it was the only one I felt like could see myself being at home. I just loved the campus and environment that was so unique to FGCU. 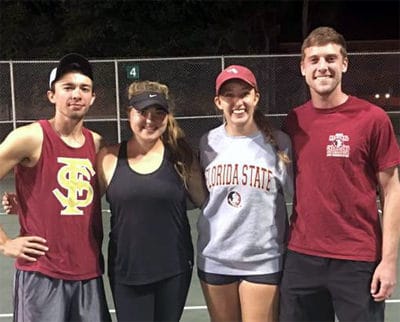 Is it odd going to a different school for the first time?

Erica: It was definitely and adjustment. In high school I was very used to being referred to as one of the ‘Dempsey twins,’ so when I was becoming friends with people who had never met her before, it was a strange feeling. There is another set of twins on my team and I distinctly remember people at practice referring to them as ‘the twins’ and assuming they were talking about me. We adapted well though and at one point were calling each other three or four times a day because we were just so used to the other sister knowing every detail of our lives.

Laura: For about the first six months to a year the weirdest part was anytime anyone said the name Erica around me, I would still react like someone was trying to talk to me but calling me the wrong name. The weirdest part still about not being together is when someone she knows from FSU runs in to me in Fort Myers and starts talking to me like we know each other. I have to tell them that I am not Erica, but yes I am her identical twin. Then they talk for 10 minutes about how we look exactly alike, or vice versa, when my friends run in to her in Tallahassee. It happens all the time. It’s always awkward but always funny.

How often do you see each other during the year?

Erica: Between the two of us we may have skipped three Tennis on Campus club tournaments total, ever. It’s basically a guarantee that we will see each other on any tournament weekend. We try to make spring break and summer plans based off each other. It ends up working out to seeing each other about twice a month during the school year at least.

Laura: Well neither one of us miss tournament weekends very often, so we see each other at least about seven times just because of the Tennis on Campus program. But besides tennis weekends, I always road-trip up a few weekends in the fall for FSU football games.

What do you consider some of your greatest contributions to the club?

Erica: The previous president, Sam Roy, was passionate and great at the job, so a lot of the time I feel like I am trying to fill big shoes. It is a much bigger job than what people realize and I gain more admiration for her the longer I’m in this role. For the most part I focus on facilitating an enjoyable, fair team that will hopefully succeed as much as it has in the past.

Laura: My goals are to try to make us a more involved club with the university, and to prepare the club for the years to come after I am gone. I was blessed enough to have previous presidents as my friends and mentors since the day I started on this club, and I have them to go to at any time to help me with anything I need. I want the kids who take over after me to feel confident that they know how to run the club well and have me to go to whenever they aren’t sure what to do. 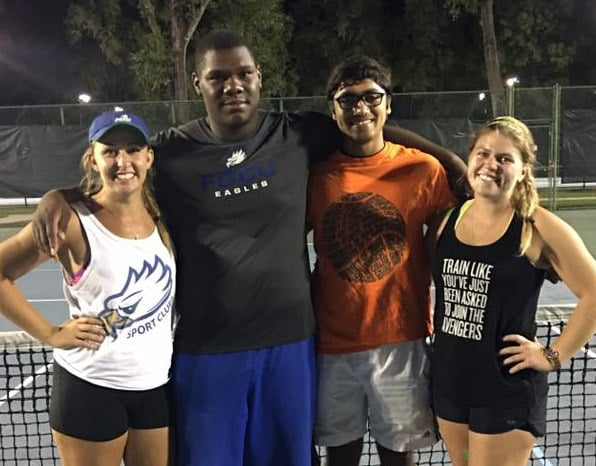 Do you and your sister share tennis club experiences and advice?

Erica: Definitely! Laura and I have extensive tennis club-related conversations. We will talk through issues with players, teams, the office, really anything is fair game.

Laura: Erica and I are basically each others’ on-call therapists in life, but especially for tennis club. Trying to coordinate and keep the peace between 30-plus of your peers is virtually a full-time job and there is always some degree of stress involved. Having someone to vent to who understands what you are going through is everything.

What is the best thing about your tennis club?

Erica: I love how great the people are on my team. I really have found some of my best friends through Tennis on Campus and can’t speak highly enough about them. A lot of us will spend library days or game days together. When my car was towed, the first people I asked to drive to the lot were team members because I knew I could rely on them. Even a lot of other teams get along great with our team.

Laura: The greatest part about my team is their friendships. Tournaments have a way of making people bond quickly. Each weekend you can see how some of them go from strangers to best friends in two days, which is pretty incredible. It sounds so cheesy but the best friends I have are from tennis club. But not just my club, Erica’s team since day one has treated me like one of their own.

What do you most admire about your sister?

Erica: I have always admired how strong of a person she is. Even when she is dealing with a lot of personal things, she can still prioritize what is best for the team as a whole instead of making emotional, irrational decision.

Laura: Well she is my best friend and twin sister so I love her both because I have to and because she is pretty awesome. For starters she is way funnier than I am. What I love most is that we go through everything together. The good, the bad, and the ugly. That kind of friendship is something I haven’t found anywhere else and is something am grateful for every single day.

Erica: That’s a great question that I wish I had a solid answer for! Perhaps employment with the USTA at some point?

Laura: The post-graduation plan, as of now, is to hopefully go to law school. Naturally, I have my eye on FSU’s, but like most college students, there is quite a large degree of uncertainty of what I am actually going to do with my life. However, I really am loving what I am studying now so it’s just a matter of finding where exactly professionally I want to take it. Hopefully at some point in the near future we end up living a little closer to each other than six hours apart.

I cannot imagine what my college experience would be like without tennis club. It has lead me to so many opportunities, in and outside of the club, friends, and roommates as well as allowed me to enjoy playing tennis more than I ever had growing up.

Check out the interview with the Erica and Laura from 2015.

To learn more about the USTA Tennis on Campus club program at schools across the country go to www.ustaflorida.com/TOC or www.tennisoncampus.com.