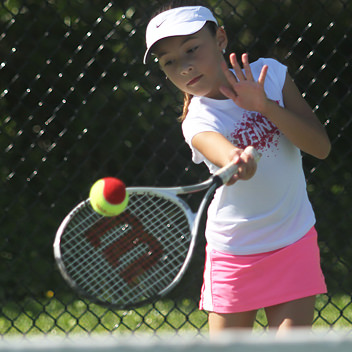 A unified “youth progression pathway” launched by the majority of USTA Sections, including Florida, has data showing that not only are children age 10 and under receiving a greater experience in beginning and developing tennis competition, but it also has participation numbers soaring.

The pathway ensures young players ages 7-10 years old compete at appropriate levels of play as they progress through competitive stages based on age, participation and achievement. The best-in-class system tracks the progress of junior players as they advance through the orange-, green-, and yellow-ball levels of competition.

USTA Florida’s 10 and Under Youth Tennis Tournament Pathway has over the last year grown unique tournament player participation by approximately 300 percent, from 400 to 1,200 players.

“The youth progression pathway has tripled the participation numbers in 10 and Under Tennis tournaments for Texas since they initiated their pathway in 2012-13,” says USTA Florida Director of Competitive Tennis Jason Gilbert. “With our recent spike in numbers over the last year in Florida, we are optimistic in achieving even greater results.”

Fifteen of the 17 USTA Sections are projected to have launched youth progression pathways by January 2017.

Youth progression pathways are “gamified,” with added online tracking game-play elements to engage players, who can track their points from earning “stars” and “trophies” as they progress through pathway. Florida remains the only USTA section to allow players to advance levels of play via match wins, in addition to participation points.

Florida entry level/beginner Level 9 and Level 8 tournaments are the basis for the beginner-level Orange Ball Level 2, in addition to Junior Team Tennis Play. Players then progress to Orange Ball Level 1, then Green Ball Level 1 before moving on to the yellow ball.

For additional details on the USTA Florida 10 and Under Youth Tennis Tournament Pathway click here.

“A youth progression pathway gives young players the opportunity to participate in suitable levels of competition, while allowing them to develop their games tactically and technically,” said national USTA Director of Junior Play Craig Jones. “This system rewards players for competing and inspires them to play more often.”

The new system also serves as a guide for coaches, parents and players to help ensure that kids 10 and under participate in events using the appropriate ball and court size for their skill level.