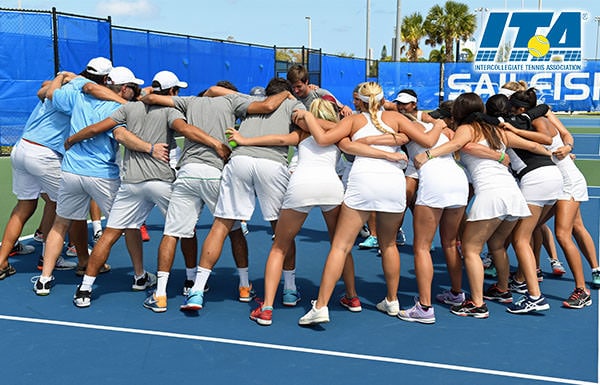 The Palm Beach Atlantic University men and women were both presented with the ITA Community Service Award.

Bueno was 15-0 at the No. 3 singles position for Saint Leo, including scoring a victory over a Top 5 nationally-ranked opponent, and was 8-0 at No. 3 doubles with teammate Willem van den Akker. Barry’s Dreer was 17-0 in singles at the time of his nomination, a five-win improvement from last year’s 12-5 mark. Twelve of his 17 wins have come from the No. 4 singles position. He was named to the President’s List in the fall with a perfect 4.0 GPA, and has been a Dean’s List selection three times and a two-time ITA Academic All-American.

Barry’s Triki finished runner-up at the 2016 ITA Oracle Cup, and established himself as one of the division’s top singles and doubles players. He’s currently ranked No. 3 nationally in singles and No. 2 in doubles. He’s a three-time ITA All-American in both singles and doubles, and a three-time first team All-Sunshine State Conference selection. Triki had a school-record 49-match unbeaten streak from his freshman to senior seasons, and was a member of the 2015 NCAA Division II National Championship team at Barry that finished the season 26-0.

Palm Beach Atlantic University men’s and women’s tennis teams served close to 400 hours together, working with First Serves of Palm Beaches four days each week during the fall. They also helped promote and fundraise for Tennis for Better Life Foundation in Naples, Fla., and hosted an Easter Egg hunt for children in the local neighborhood around its athletic complex in West Palm Beach.