The 24-year-old Hawkins in the championship defeated Alberto Barroso-Campos, the current No. 1 singles player for the University of South Florida who collected $800 in prize money, 4-1 in the short-set no-ad scoring competition. 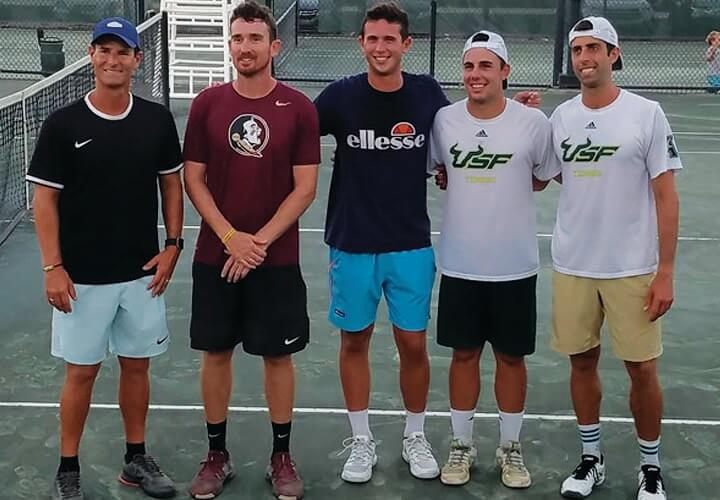 One-On-One Doubles is the half-court, serve and volley singles game played crosscourt-only with the alley included. Tournaments enforce its serve-and-volley rule, on both serves, or there is a loss of point. Half-volleys are permitted, and the returner can stay back or come in.

“One-On-One Doubles is a great example of the complete tennis player,” said Ken Veney, tennis director at the Sawgrass Racquet Club. “You have to have an all-around game to compete and this style of tennis is awesome for spectators as it is fast and furious. Can’t wait until next year!”

In the 3rd/4th place playoff Ryler DeHeart defeated Alex Centenari 4-0. DeHeart, the associate head men’s coach at Florida State University, lost to Rafael Nadal in the second round of the 2008 US Open. Centenari is also a former ATP player and the current assistant men’s coach at the USF.

The tournament featured 21 amateur, college and pro tennis players, with each player guaranteed three matches, and the top eight players advancing to the single-elimination quarterfinals.

“What a great event to help bring back the lost art of the serve and volley,” Centenari said. “The energy at the club was awesome, with people having a great time with food, drinks, live music and great tennis. I had a blast.”