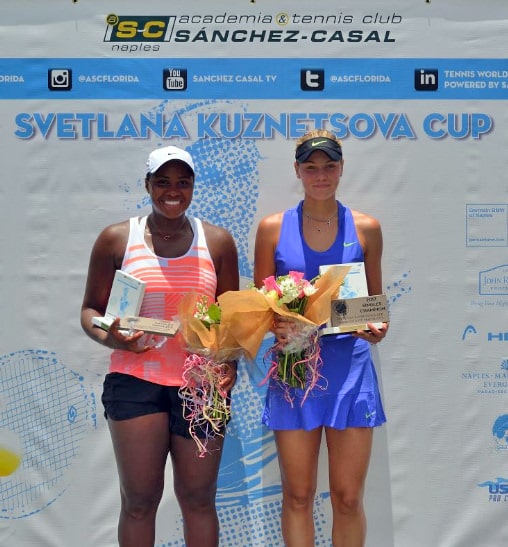 The 21-year-old Townsend, a former No. 1 in the world during her junior days, led 5-3 in the second set but could not put away the scampering Russian in sweltering temperatures in the mid-90s.

“It was very tough because you’re sweating so much and it’s coming down to your grip on the racket and you just hope you don’t lose your racket,” Zhuk told the Naples Daily News of overcoming the heat and humidity.

The final was a rematch of this year’s Miami Open where Townsend won their first-round match in two tiebreaks.

Zhuk, who entered the event ranked No. 230, won the Wimbledon juniors title two years ago as a 15 year old. She improved to 4-3 in career ITF/USTA Pro Circuit finals, and was also a runner-up in April in Irapuato, Mexico. During the week she twice needed to come from a set down to advance, in the second round against Colombian qualifier Emiliana Arange, and in the quarterfinals against No. 8 seed Urikke Eikeri of Norway.

Townsend was stretched to three sets only once during the week, defeating No. 4 seed Usue Arconada 6-2, 2-6, 6-3 in the semifinals. Her Naples run ended a four-match losing streak that included the Miami Open, the WTA Charleston qualifying, and USTA Pro Circuit events at Indian Harbour Beach (Fla.) and Dothan (Ala.). She is now 3-3 in career USTA Pro Circuit singles finals.

The doubles title was won by American Emina Bektas and Chile’s Alexa Guarachi, who as the No. 4 seeds upset the No. 3-seeded tandem of American Sophie Chang and Norway’s Eikeri 6-3, 6-1 in the final.

For additional info go to www.usta.com/en/home/pro/pro-tennis-events/women-s-tournament-information.html.