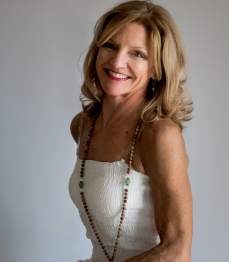 SMILES TO GO BEFORE SHE SLEEPS: Pamela Leal is all smiles off the court, and helps people to smile more on the court.

Tennis is a game that begins with love. And if Pamela Leal has anything to do with it, there might be more love during the game itself. That’s because the Yoga teacher of 14 years has been spreading her Yoga for Tennis training throughout South Florida.

She currently teaches high-school team players and state-ranked teens who train with tennis pro Fernando Martinez at a private court in Boca Raton. She also conducts more general Yoga classes at six different studios that tennis players attend in Coral Springs, her town of Parkland, and Boca. The yogi has also just begun a Yoga for Tennis program at the Heron Bay Country Club in Parkland.

Tennis players aren’t the only athletes who the spiritual trainer has worked with: She taught Yoga to about 30 of the Florida Panthers NHL hockey team a few years ago, as well. While it may raise a South Floridian eyebrow or two that an Indian spiritual method would settle into American pro-sports locker rooms, Top 10 tennis stars like Novak Djokovic, Andy Murray, and Maria Sharapova, and NBA All-Stars LeBron James, Kevin Love, and Shaquille O’Neal, among others, have made their bodies more flexible on Yoga mats.

In her Yoga for Tennis program, mats are placed on hard courts for 5 p.m. classes when the sun is less demanding. Pamela met Fernando when her daughter Madison, a ranked high schooler, began coaching with him. Eight of the kids Pamela works with now are USTA-ranked in the Top 50 in Florida, including 12-year-old Maria Drobotova, of Deerfield Beach, who boasts a No. 19 ranking nationally. 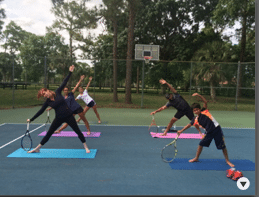 BENDING WITH A RACKET TO QUIET THE RACKET: Pam’s Yoga for Tennis class
incorporates the use of a tennis racket on a court to quiet the racket in your mind later on on the court.

Simona Babb, 18, currently No. 45 in Florida according to TennisRecruiting.net, will take her Yoga training to the Naval Academy. The Lighthouse Point native said that, “Yoga gives me more self-awareness; the breathing can get me through tough poses in class, and that has helped me get through tough points on the court.”

Fernando, who’s seen Yoga offered at tennis academies, said that most of the time, kids don’t take to it. But the flexibility of Pamela’s teaching methods, he says, makes it appealing to his students, and mostly all participate, even though her classes are optional. The tennis pro brings Yoga to his charges because it brings greater body awareness, increased range of motion, enhanced self-awareness, and mental stillness.

Shanna McGinty, who plays out of Parkland Golf & Country Club, said that Yoga has “totally helped my game physically and mentally.” She’s more flexible and “had no injuries all season,” a remarkable achievement, she noted. So high on Yoga, she recently completed certification as a teacher of the ancient spiritual art.

Teammate Roberta Martin, who I used to play against and who was kind enough to introduce me to Pamela’s Yoga for Tennis program, said that she benefits both physically and mentally from it. Physically, “I’m less stiff, enabling my strokes to be more fluid, “ she says. Mentally, she’s more present in the moment, letting go of the error she might have made on the previous point. “Tennis is a game that’s played point by point,” she said, “so it really helps to be focused on the next point.”

THE POSE KNOWS: Pamela in a Yoga posture.

Lisa Ruderman, who plays for Heron Bay in Parkland, and who brought Yoga for Tennis to her country club in May, said that the asanas (Sanskrit for poses) helps her on the court with “more focus and mental toughness.”

Bev Capasso, the former CEO of Jackson Memorial Hospital in Miami, said that Yoga has given her “greater core strength and balance.” And much more mental control, “quieting the mind’s chatter,” which helps her greatly with more relaxed muscles and a “cleaner way of playing.”

Many Yoga classes end with the instructor saying to her students, “Namaste.” (It’s pronounced na-ma-stay, and is Sanskrit for “I honor the higher Self within you.”) Considering how Yoga for Tennis adherents are more present in the moment, Pamela might consider telling her participants, “Namaste in the moment; it’s the only moment there is.”