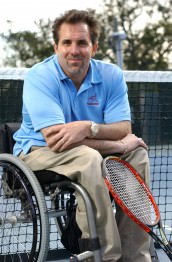 “Defending men’s champion Gordon Reid of Great Britain is returning along with another world-class field of top-ranked players,” says Tournament Director David Mayo, who is also a competitor in the “A” Division. “Six of the world’s Top 10 women will be competing along with seven of the Top 10 men.”

The official kick-off event will be a “one-up, one-down” exhibition doubles match at Roger Scott on Tuesday, March 17, at 6 p.m. featuring the world’s No. 1- and No. 2-ranked men along with pros from Roger Scott.

Eighty-six players will be representing 18 countries at what will be the third-largest tournament in the country this year.

“It’s no surprise to have such success when you combine the gracious Bruce Caton and staff of our Pensacola Parks & Recreation Department,” Mayo says. “USTA Florida and the Pensacola Sports Association are also key partners. I am thrilled that Pensacola can roll out the red carpet to the world in such a grand way. No other local sporting event brings in more international attendance than the Pensacola Open.”

The Pensacola Open offers various divisions (Open, A, B, C) allowing all players a chance to play at a competitive level. The matches are during the day beginning Wednesday, March 18 with the finals on Sunday, March 22 at 11 a.m. Attendance is free to the public.

The UNIQLO Wheelchair Tennis Tour, sanctioned by the International Tennis Federation, originated in 1992 with 11 international tournaments. It has grown into a tour comprising 160 events in 45 countries around the world for 2015. The USTA along with the ITF serve as the sanctioning bodies for the Pensacola Open.