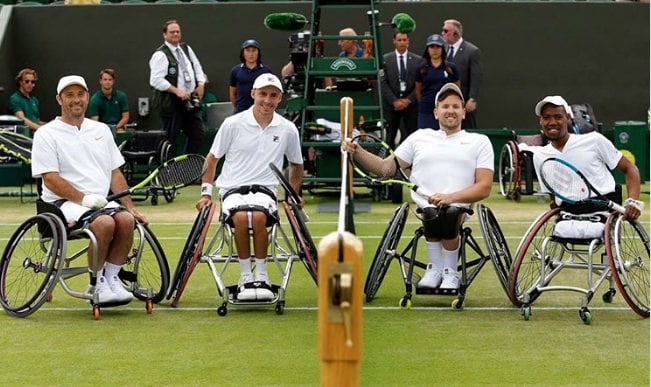 Four Americans raised doubles trophies while a singles player you may have heard of finished runner-up, in addition to three other American doubles runner-up efforts during the fortnight at Wimbledon.

Mike Bryan of Wesley Chapel, Fla., playing without injured brother Bob, won the men’s doubles titles with Jack Sock, the first time Mike has won a Grand Slam title without his twin brother. It was Mike’s 17th Grand Slam men’s doubles title, tying the Open Era record with John Newcombe. Mike also took over the No. 1 doubles spot on the ATP rankings, becoming the oldest player to rank No. 1 at age 40. It was Sock’s second Grand Slam doubles title and second at Wimbledon after his 2014 victory with Canadian Vasek Pospisil.

Nicole Melichar of Stuart, Fla., won the mixed doubles title with Austria’s Alexander Peya. It was a first Grand Slam title for the 24-year-old doubles specialist who also reached the women’s doubles final, as the No. 12 seed with partner Kveta Peschke of the Czech Republic falling to No. 3-seeded Czechs Barbora Krejcikova/Katerina Siniakova. The Florida-grown Melichar is a former veteran junior competitive player and participant in the USTA Florida “Bobby Curtis” Junior State Championships.

“You dream as a kid to play in Grand Slams, you dream even more of playing in Grand Slam finals,” Melichar told USTA Florida. “Winning in a Grand Slam final is just a dream come true and it just shows that all that hard work wasn’t for nothing.  I need to attribute it to the team around me. You cannot win a Grand Slam alone. Everyone played their part. But the most important person has been my coach, Torsten Peschke. The way he teaches and understands the game is incredible and I don’t think I could have done it without him.”

American David Wagner won the wheelchair quad doubles title with Brit partner Andrew Lapthorne. It was the first Wimbledon title for the Californian who has won the Australian Open and US Open doubles eight times each, and three singles titles at each event.

Serena Williams of Palm Beach Gardens, Fla., led the runners-ups among the Americans at Wimbledon, in only her second Grand Slam tournament after the birth of her first child, with a ranking outside the Top 150 (although she was allotted the No. 25 seed by the All England Club), rolling to the final before being stopped by fellow former No. 1 Angelique Kerber.

The team of Americans Caty McNally (Cincinnati)/Whitney Osuigwe (Bradenton, Fla.) were runners-up in the girls’ doubles final, as the No. 2 seeds losing to the top-seeded Chinese team of Wang Xinyu/Wang Xiyu.

For more info go to www.wimbledon.com.