Red means stop for adults; but it now means start for kids. That is when the red is a big tennis ball for children eight years old and younger who are getting an enlightened tennis start.

ROGY allows kids to master the sport by playing with equipment — and on court sizes — commensurate with the size of their bodies.

“Small kids don’t start playing basketball on regulation 10-foot baskets, so why shouldn’t we do the same for tennis?” said Sean Henegan, Junior Development Director at Midtown Athletic Club in Weston, which hosted a ROGY tournament in May. 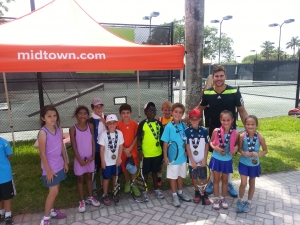 NOT JUST KIDS’ STUFF: The first, second, and third place finishers (front row) in the 10 and under and eight and under events are wearing medals. Sean is the tall guy.

Henegan said that red balls have 75 percent less compression than standard balls. This means the bounce is lower and the pace is slower, so balls don’t bounce over the heads of children, enabling them to rally better.

“It lets kids hit the ball in their strike zones, to take the ball on the rise, and not change their grips to hit balls over their heads,” the junior development director observed. “Kids have a hard time covering a 78’ court; the 10-and-under format with adjusted equipment lets them look and feel like the pros they idolize on TV.”

The South African-born tennis pro isn’t the only one to see wisdom in this approach.

“Some European countries developed programs for children 15 or 20 years ago,” he noted. “It’s no coincidence that tennis is being dominated by players from these countries.”

The ROGY tourn-events have been sanctioned by the USTA Florida for two years. 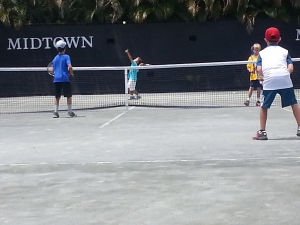 “Scaling tennis down to the size of children promotes greater participation and ensures that young kids can play tennis much more quickly,” he said, adding that the approach is “critical to the long-term growth of our sport and, ultimately, will help us develop new generations of talented players.”

Unlike the standard 78’ x 27’ tennis court, the court for the smallest children is 36’ x 18’. The dimensions jump to 60’ x 21’ for the nine- and 10-year-olds hitting orange balls, and to regulation size for the next groups. Scoring for the Weston tournament flexibly ranged from seven-point tiebreakers (red balls), and first to win four games (orange balls). Flexibility takes on gender lines, too, as boys and girls played each other.

Winners for the recent tournament included Taj Altine of Boca Raton, who won the 10 and under division, and Camila Cardona-Carballosa of Miami, the victor in the eight and under section.