Wayne Bryan is the father of Bob and Mike Bryan, the current No. 1 doubles team on the ATP World Tour. 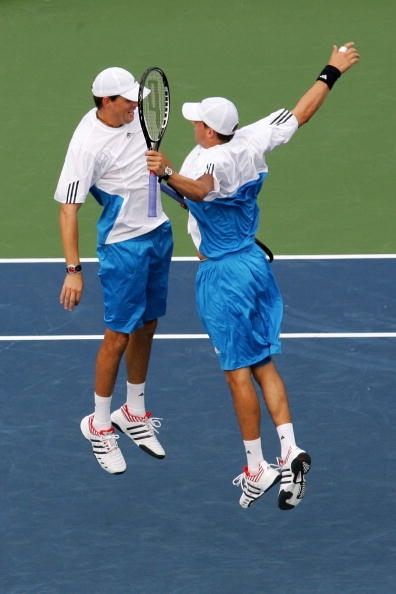 Can a team of singles stars win a doubles titles?

On any given day, anything can happen in tennis, especially on the doubles court where margins are thin. We have seen it from time to time. Athens Olympics, a few times at the French, a few times at Indian Wells. But overall, the doubles stars usually beat the singles stars.

That should not be surprising.

Same with football — way back in the day, all the players went both ways on offense and defense. The game was not played at near as high a level as today. Do you want to see Joe Montana playing defensive back? Much better to make him a QB 100% of the time and Ronnie Lott a DB and not a QB, eh.

In the ’60s and ’70s, the way someone played singles was the same way they played doubles. But now Singles has evolved into a baseline game with no serving and volleying whatsoever, with long rallies and lotsa grinding and running. Doubles, however, still features serving and volleying and crisp and precise returns and lots of teamwork and more complex strategies and tactics and a baseline grinder with poor volleys is not going to excel in doubles — can they sometimes win anyway, of course.

I would submit that singles is checkers and doubles is chess. The best doubles points — it seems to this biased writer — are way better than the best singles points.

Basketball players today are better than the players in the ’60s and ’70s and look how well so, so many players can hit the three-point shot — even guys that are 7 feet tall. Football players are bigger, stronger, faster and quarterbacking and wide receiving and kicking skills are amazing. Same with baseball players and track athletes and swimmers.

Since Mike ‘n Bob have been regulars on the pro tour for the past 13 years, the #1 players have been Lleyton, Andy, Roger, Rafa, and Novak. Here are their doubles records and percentages:

And one more piece of propaganda: At the 2012 Olympic Doubles in London, most all the singles stars were entered in the draw. Nine of the Top 10 singles players competed. Roger Federer and Stan Wawrinka lost in the second round to Jonathan Erlich and Andy Ram of Israel. The Bryan Bros. beat Erlich and Ram in the next round, then defeated Julien Benneteau-Richard Gasquet in the semis, and they turned aside Jo Willie Tsonga-Michael Llodra in the finals — all in straight sets.

Uno Mas:  At the 2014 BNP Paribas at Indian Wells, everyone was buzzing about the number of singles stars that entered. I counted 33, including the team of Roger Federer-Stan Wawrinka, Andy Murray, Juan Martin Del Potro, Jo Willie Tsonga, John Isner, Marin Cilic, Feliciano Lopez, Fernando Verdasco, Sam Querrey, Milos Raonic, and on and on.

Some speculated that they would dominate the doubles. When the smoke had cleared who was in the finals?  Yeah, the #1 and #2 doubles teams.