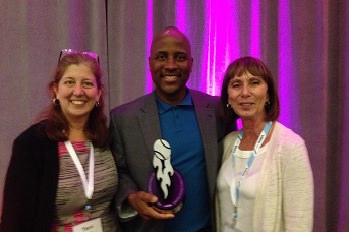 Over the last 19 years the MaliVai Washington Youth Foundation has provided an after-school haven for the children in the high-crime Jacksonville, Fla., area of Durkeville, with a mission “to develop champions in classrooms, on tennis courts and throughout communities.”

“There is so much potential in these students, every single one of them,” Washington said. “When I was 10 years old I was dreaming of playing at the US Open and being on stadium court, and they have dreams as well. It is our job to help them realize their dreams.”

“This will be as much if not more of his legacy than being on the tennis court,” said MWYF Executive Director Terri Florio, who with Washington has overseen the foundation since its inception.

Washington turned pro in 1989, and in 1990 was named the ATP Rookie of the Year. During a 10-year career cut short by a knee injury he won four titles in 13 singles finals, reached No. 11 on the ATP Rankings, and posted career wins over No. 1-ranked players Andre Agassi, John McEnroe, Boris Becker, Stefan Edberg, Jimmy Connors, and Gustavo Kuerten.

In 1996 he reached the Wimbledon Championships final, becoming the first African American man to reach a Grand Slam singles final since the legendary Arthur Ashe won Wimbledon in 1975. The two remain the only African American men to achieve the feat.

Also recognized for volunteer service to the USTA from Florida were: