Longtime Boca Raton, Fla., resident and former world No. 18 Vince Spadea is a periodic blogger for USTA Florida. He boasts career wins over former No. 1s Roger Federer, Pete Sampras, Andre Agassi, Rafael Nadal, Andy Roddick, Patrick Rafter, Yevgeny Kafelnikov, Jim Courier, Marat Safin, and Gustavo Kuerten, and he twice represented the U.S. at the Olympics. He is the author of “Break Point: The Secret Diary Of A Pro Tennis Player,” a tennis coach, rapper and clothing designer among his many off-court pursuits: 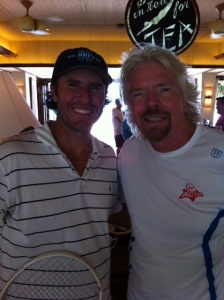 Late last year I had the privilege of being invited to the 2013 Necker Cup. Sir Richard Branson is the host and he owns the island. The 2nd annual Necker Cup was a life memory filled with amazing tennis legends and majestic island scenery. The hospitality was flawless and everyone had a vacation to remember.

It was a special treat because I got a chance to reunite with some of the legends of the game whom I had practice encounters with, as well as battles on the stadium courts. Some of names included Boris Becker, Stefan Edberg, Martina Navratilova and today’s legend Rafa Nadal. 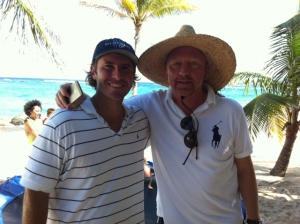 Boris Becker: Boris has always been a classy and friendly champion. He was always optimistic and smiling in the locker room and tennis courts. I practiced with him several times and always idolized his all-around game and attention to be the best in a fierce era of competition. 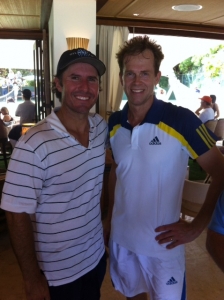 Stefan Edberg: Stefan is another true noble and utterly brilliant icon in tennis. He spells out success. Sportsmanship, humility, talent, and accomplishments. A true role model and a timeless hall of famer. Although I never played him, I’ll never forget the day in 1990 when I was just 16 years old. He was at Key Biscayne playing in the then-called Lipton Championships. Stefan’s warm-up partner canceled and he was scrambling to find a practice. My dad called me from Miami as I was asleep in Boca Raton at 10am. I remember jumping out of bed and hurrying in the car, racing to Key Biscayne to hit with Stefan for just 30 min. This is the kind of impact he had on young aspiring pros. It was a great day I’ll always remember. And He was just as cool and friendly in Necker Island. He still looks young and fit and humble, and now he’s coaching Roger Federer.

Martina Navratilova: Martina has always been an all-time inspiration for me. Another true tennis memory of mine was practicing with her when she was No. 1 in the world at the US Open. I was 17 years old in 1991 and we played on stadium court. She was always supportive and asking how I was doing throughout the years. She is still in shape and played wonderfully at the Necker Cup. 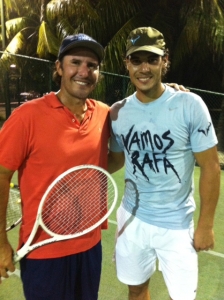 Rafa Nadal: I played Rafa in the fall of 2004 when he was 18 yrs. young. He was such a brilliant, precocious player in that match and I could see the intensity and relentless drive that would catapult him into what he is today. We played later in 2005 on center court at Wimbledon after his first French title. He improved in 6 months since my win in the Madrid Masters 2004 and Rafa has really taken his game up many levels since then. The thing I find admirable about Rafa, amongst his known traits of fighting spirit and monstrous physical conditioning, is his thirst to improve. He is always building his serve, his forehand over the years got stronger and more penetrating. He experiments with slicing and coming to the net and imposing his transition game when needed. I know better than anyone, it’s difficult to stay open minded for change when you’re at a high level of accomplishments, but Rafa is better than anyone I’ve seen. He continually brings something new to the table. Most players have an appetite to improve but don’t have the courage like he does. They are set in their ways and slide up the improvement ladder slowly, if ever. If he can continue this, I see him breaking Roger’s 17 GS record.

Playing against Rafa in the Necker Cup was a fun time, it’s a pro-am hit-and-giggle but we had a pro exchange of rallies and it brought back good memories. He is a great tribute to the game and to all sport. In Necker, we talked about the day I won and how he became legend since then. He mentioned that he took his own road to success, and didn’t do what the typical successful Spanish tennis system detailed. He told me he got up earlier than everyone else and practiced more hours of tennis and fitness. He made sure he would change the mold, and he did. He has. I learned a lot in Necker Island, had the time of my life, and went away with a few thoughts.

What a good life,
Be great, be nice,
work earlier hours,
and give back twice.
Hit your slice,
Eat some brown rice,
Take some advice,
you’ll end up just right,
What a good life

Vince Spadea — I Ain’t Afraida Ya

Past blogs:
What U.S. Men Need to Work On