On this Veteran’s Day, we honor the courage, bravery and sacrifice of those who have selflessly served and continue to serve our country. Today and every day, we send our gratitude to veterans and their families and thank them for protecting our safety and freedoms.

A resident tennis professional at the Palm Beach Gardens Tennis and Pickleball Center, Vernon Boyd, an Army and Air Force veteran, makes it a point to see the humor in life.

Boyd’s path to becoming a tennis professional is a little unconventional, but as the saying goes, it’s about the journey, not the destination. Boyd got involved in sports at a young age thanks to his older brother Charles.

“He and I were the only athletes in the family. He taught me how to play tennis, basketball and chess among other things,” he shares. “I continued to learn and grow as an athlete after Charles left for college and made the tennis and chess teams in high school, as well as became the player coach of the school basketball team.” 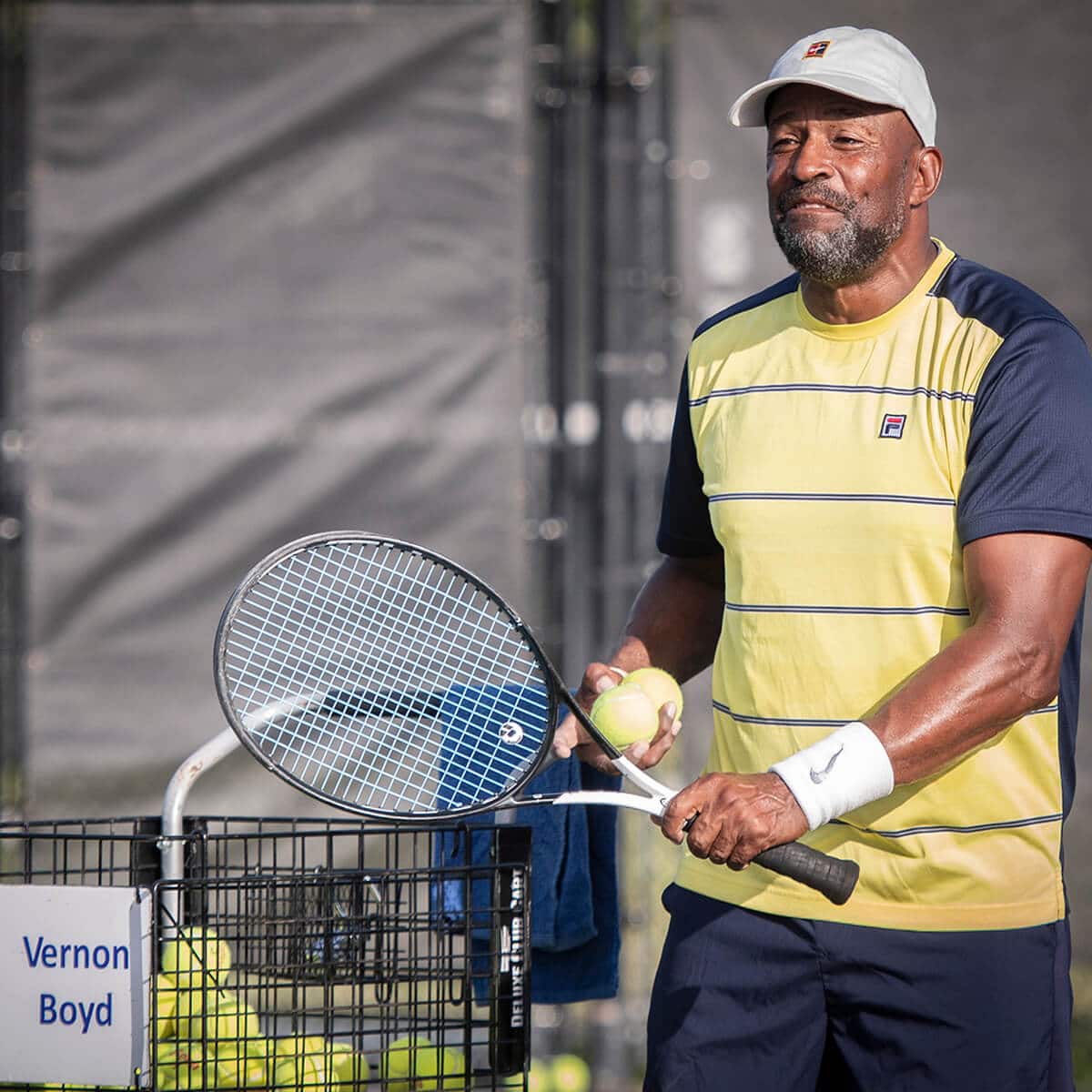 While Boyd’s journey to becoming a staple in the tennis community may be atypical – his initial reasoning behind serving his country is a bit unique as well and all stems from his mother’s strictness.

“I had to be in the house every day at 6:45 p.m. up until the mid-portion of my senior year in high school,” he recalls. “When I graduated high school, I thought it was going to be like that all of my life. So, I joined the Army just to get some freedom from my mom!”

A newly-graduated young man weighing in at just 98 pounds, Boyd was accepted as a new Army recruit. A year into his service, he realized that his reasons behind joining were the wrong reasons. Wanting to stick it out by finding a new challenge, he took up a more in-your-face sport to pass the time.

“I started boxing, which meant I was willing to get punched in the face in lieu of making a change,” says Boyd. “Another seemingly bad decision but I wasn’t going in totally green. St. Louis had a huge boxing community so I had an understanding of how to box and my mother, my dear mother, she taught me how to bob and weave!”

Boyd’s wit and whimsy aside, joining the service provided him an opportunity to travel the nation and parts of the world he wouldn’t have been able to experience otherwise. He was taught discipline. He was taught the value of hard work. Boyd took his involvement in the Army and turned it into a learning experience that helped him grow into the man he is today. In an effort to not stop gaining knowledge, Boyd crossed over to the Air Force after finishing his tour with the Army and served another four years at Homestead Air Force Base.

“Throughout my service, I was blessed to be stationed in Texas, Hawaii, and at Homestead Air Force Base here in Florida, all of which had tennis programs,” he shares. “I learned a lot from all my coaches throughout my journey as well.”

After his time as an active-duty Air Force member, Boyd moved to New Hampshire and worked as a part-time tennis instructor at the Nashua Swim & Tennis Club for eight years. He also kept up boxing, this time professionally.

“I was 30 when I turned pro as a boxer, which is ancient for the sport,” he explains. “Although I was undefeated as a pro, it would have taken me another five years to make a name for myself. That would have made me 35 – practically post-mortem for boxing!”

Beyond teaching tennis and boxing, Boyd also had a full-time job. But when that company started downsizing and eventually let Boyd go, the tennis pro he was working side-by-side with suggested he get his certification to teach tennis full-time.

“It was the best decision I made in my entire life,” he resounds. “I got my first certification with PTR and two years later, I was got my certification with the USPTA and finally, I had my passion. I realized this is what I wanted to do for the rest of my life.” 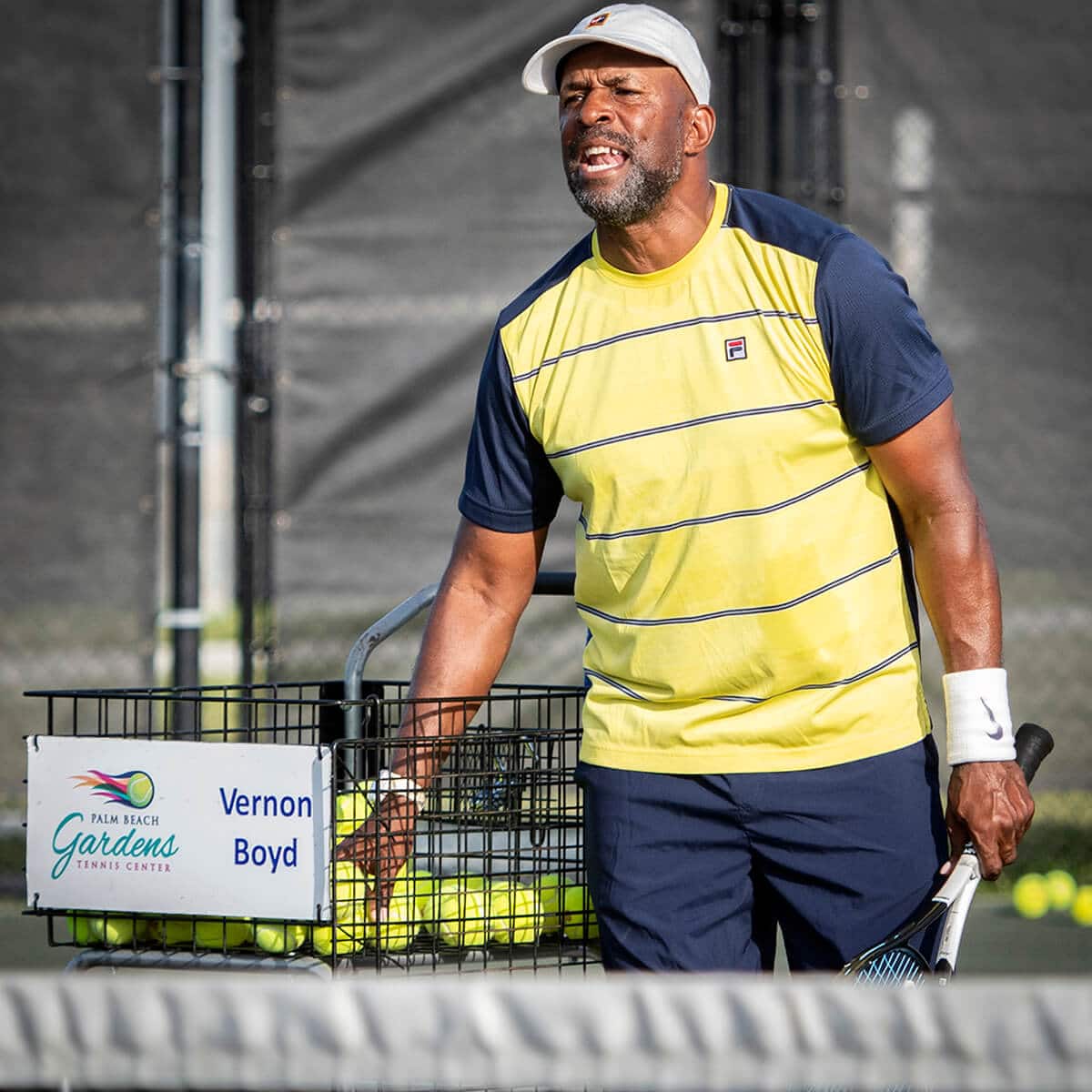 Once certified, Boyd dropped boxing and dove into teaching tennis full-time. He moved to Binghamton, N.Y. where he ran a tennis program for the city during the summer and refereed soccer, lacrosse, and basketball in the winter. It was while he was in Binghamton that he got the offer to move to Florida to be a teaching professional at the Palm Beach Gardens Tennis and Pickleball Center, a position he couldn’t refuse.

“I am thrilled to be a pro here. I’m now going on my fourth year and each has been more amazing than the other,” says Boyd. “As I reflect on it all, it appears that young, immature 98-pound kid from St. Louis made the right decisions after all.”