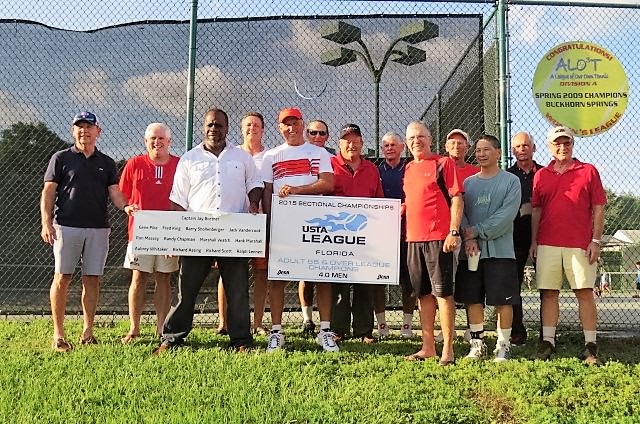 Ahead of their trip to USTA League Nationals, the USTA Florida League Sectionals-winning Adult 55 & Over 8.0 team out of Hillsborough County (Valrico, Fla.) last week presented their home club, Buckhorn Springs Tennis, with their winning placard and a list of team member’s names.

The presentation was made by the team to Buckhorn Springs Tennis Facility Director Greg Jones. Team captain Jay Bortner led the festivities for players, wives and friends, which included champagne and snacks, presenting along with co-captain Marshall Veatch.

“I want to say how proud I am of these players,” said Local League Coordinator Barbara Jones. “They are not only active tennis players in the Tampa area but they show great sportsmanship and I know they will make Florida proud.”

In the final of the Adult 55 & Over 8.0 Sectional in Daytona Beach at the Florida Tennis Center in April the Valrico men defeated the team from Broward County (Woodmont Country Club, Tamarac) 3-0, winning two of the match in third-set super-tiebreaks.