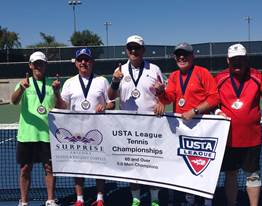 Only six players from the team’s 11-man roster were able to make the trip to Arizona, so the squad persevered through six team matches in three days to capture the championship. Ten of the team’s 18 individual matches were decided in third-set match tiebreaks.

In the final the Valrico team edged the USTA Southwest team from Tucson, Ariz., 2-1.

“We lost the first match, and from then on it was a real challenge,” said captain Jay Bortner, who saw his team win both their matches in the final in third-set match tiebreaks. 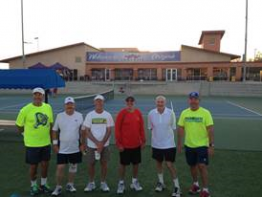 “Their team is composed of a retired Air Force pilot, a retired Navy officer, a former baseball pitcher and college baseball coach, a retired physical education instructor, and a retired accountant and college professor and surgeon,” said USTA Florida Hillsborough-area Local League Coordinator Barbara Jones. “They are husbands, fathers, and grandfathers, and dedicated family members who love the game of tennis.”

Jones adds that this team of athletes can be seen all over the county.

“The 65 & Over team is comprised of dedicated tennis enthusiasts,” she says. “Some are in the National Senior Games, play area tournaments, and can be seen on local tennis courts almost every day. They are also USTA team members of the Adult 55 & Over league, Mixed, Combo, and Adult 18 & Over and 40 & Over leagues.”

Jones remained in contact with the team in Arizona as they made their run to the championship.

“When I checked their play on-line and they were winning their flight, I e-mailed the captain and told him that we would have a ticker-tape parade for them if they went to the finals and actually won,” she said. “Now, somehow, I have to live up to my promise. I’m not sure how to organize a ticker-tape parade, so maybe we can just organize a tennis social and congratulate them in their favorite environment!”

For more info on USTA League play in Florida go to www.ustaflorida.com/adulttennis/usta-leagues.