Valentine’s Blog: Tennis Love & the Couples Who Play Together & Stay Together 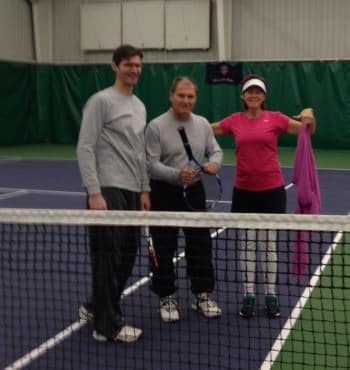 THEY WERE NO. 1: That’s the Paulins, some years after their No. 1 statewide ranking in the 35+ Husband & Wife division. The tall boy is their son, Corey.

When I told people that, for my February blog in honor of Valentine’s Day, I wanted to write about couples who play doubles together, I heard more jokes than I do on April Fool’s Day.

The prevailing sentiment among most tennis players is that stepping on the court with your significant other is a recipe for failure, both on the court and off, leading perhaps to a different kind of court — divorce.

But there are quite a few mates who’ve found that playing the game that starts at love-love with the one you love the most is fun, and actually enriching to the relationship. Having won multiple tennis tournaments with my wife Barbara, I can vouch for that fact. Here are a few other couples who agree that having their partner as their partner makes a lot of sense.

Homestead-based Gary and Selma Paulin, ranked No. 1 in Florida in the Husband/Wife category in 1989-1990, played together for about five to 10 years. The fact that there’s still a division for couples playing together demonstrates the USTA’s recognition that the couples who play together, stay together.

While the Paulins admit to taking a couple of years to work out the kinks (read: Gary telling Selma what to do, etc.), it was well worth it because, “We love each other, so it was fun to play together,” said Selma, a happy-go-lucky spirit. “You have to go home together, so you have to straighten out any problems before you leave the court,” she added.

The uber-competitive Gary acknowledged that his wife’s skills (as good as he or better, and 4.5 at the time) helped them in tournaments, because opponents hit the ball more to her, and she handled it with aplomb. His advice to husbands who play with their wives: “Keep your mouth shut.” Added his wife laughing, “Husbands have to grin and bear it, and watch their body language, too.”

BILL & JILL WENT UP THE HILL: Presumably to play a round of doubles.

Bill Forray and Jill Needleman, a longtime couple in Boca Raton, were each strong tennis players when they met at the Long Island tennis club that Bill, a teaching pro, was running. Half a year after their first date, they were on the court together. As a team, they won a USTA tournament in Old Westbury, Long Island.

More recently, they played in a 9.0 USTA Broward County 40 & Over League, and won all but one of their matches. On the court, said, Jill, “I trust Bill totally, and have 100 percent comfort with him.” The love between the two is palpable; Jill gives Bill his favorite side of the court to play.

The advantage of being in relationship off the court and on, Bill said, is that, “I know what my partner will do in every circumstance even before she does it.” It’s the tennis version of finishing your spouse’s sentences. They love each other, they love movies, and they love tennis, so they also love playing tennis with each other. 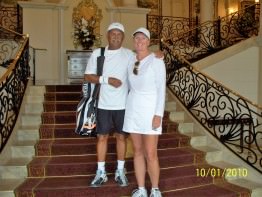 KING AND QUEEN: Maharaj means great king in Sanskrit, a perfect name for Vishnu and Michele, a king and queen of doubles.

Vishnu and Michele Maharaj, an 18-year married couple in Northeast Florida who’ve been playing mixed doubles at a high level for 15 years and received free higher educations for their tennis play, won a USTA tournament in Georgia. Vishnu, who was on the Miami-Dade Junior College team that won the national championship in 1969, managed the Crandon Park Tennis Center in Key Biscayne for six years, and has been a teaching pro since 1971. His wife, a full-time oncology nurse, is a certified USPTA pro. All six of his siblings have been tennis pros, and his father, 92, still teaches the sport.

Vishnu knows that, “I’m going home with my tennis partner, so I’ve learned not to get angry with her because whatever mistakes she makes aren’t because she wasn’t trying.” With longtime on-court and off-court relationships, “we often say the exact same thing at the exact same time, on the court,” Michele said. “It’s spooky.” 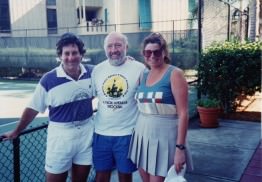 THE BUD HAS FLOWERED: The author and his wife Barbara back in 1993 at their first tournament win at the Bud Collins Hackers Open in Longboat Key. The tournament is defunct, but the marriage has survived.

The nurse loves the quality time that she can spend on the court with her husband. And Vishnu enjoys the conversation about the match that he can have with his on-court partner after they’ve left the court.

Vishnu, in India, is the Hindu god who maintains the universe. And the Vishnu in Florida has learned that tennis with his mate can maintain a marriage.