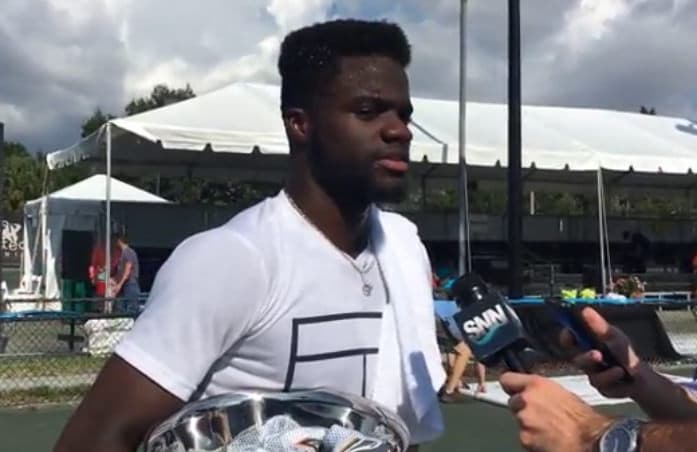 The No. 3-seeded Tiafoe outlasted Austrian ATP veteran Jurgen Melzer 6-4, 6-7(5), 7-6(5) in the semifinals. The 19-year-old improved to 4-7 career in ITF/USTA Pro Circuit finals, and moved into the Top 75 for the first time on the ATP World Tour Rankings this week.

Sandgren is now 2-2 in career finals, and 1-1 this year after winning the Tempe, Ariz., title in February. Melzer and American Scott Lipsky won the doubles as an unseeded team, in the final defeating the unseeded American/Canadian duo of Stefan Kozlov/Peter Polansky 6-2, 6-4.

The 23-year-old Mantilla entered the event at No. 582 on the ATP rankings, and won his first title in five career final appearances at ITF/USTA Pro Circuit events. The 22-year-old Hemery was seeking his second ITF/USTA Pro Circuit title after the Italy F9 title in 2015. No. 3-seeded Americans Evan King and Hunter Reece won the doubles title, in the final defeating the unseeded Australian/Japanese pairing of Daniel Nolan and Yosuke Watanuki 2-6, 7-5, 10-8.

Fifteen-year-old Amanda Anisimova of Hallandale Beach, Fla., continued her run of late last week at the $60,000 Hardee’s Pro Classic in Dothan, Ala. She ran all the way to the final as an unseeded player and won the first set before falling to No. 8-seeded American Kristie Ahn 1-6, 6-2, 6-2.

It was the second straight final for Anisimova after losing in the championship of the $80,000 Indian Harbour Beach event. She is 0-3 in USTA Pro Circuit finals, all since February of this year. After a quick start, Anisimova in the second set took a medical timeout for an upper-leg injury, and was in tears after the match.

“She came out firing and she definitely caught me on my heels,” the 24-year-old Stanford graduate Ahn told the Dothan Eagle. “She’s an unbelievable player. I got lucky. Just dug my feet in a little bit.”

It was the sixth career ITF/USTA Pro Circuit title for Ahn and her first since Winnipeg, Canada in 2015. She is 6-3 in career finals. Anisimova and Ahn are in a neck-and-neck race this week for the Roland Garros Wild Card Challenge.