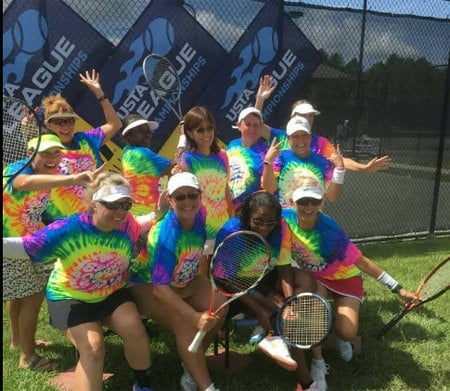 League tennis is the largest membership program within the USTA family, providing opportunities for approximately 315,000 members to play organized team tennis in some 316 local league communities throughout the United States (including Alaska, Puerto Rico, American Samoa and Guam).

It is also the largest organized adult tennis program in the country.  League tennis was created when the USTA commissioned a marketing firm in the 1970s to study avenues to create additional play, including league play.  The firm recommended immediate adoption of a national program which we now know as USTA League.

Pilot programs were developed in the Southern and Mid-Atlantic sections in 1978, and joined by the Middle States and Western (how many of us remember that one?) sections in 1979.  The program was approved for play throughout all USTA Sections at the 1980 USTA Annual Meeting of the membership, with play at a variety of levels for women and men.

The emphasis was, and still remains, on local competition. What differentiates the USTA League program from all other local leagues is the opportunity for winners to advance to USTA Sectional and National Championships.  Thirteen sections participated in the first year of the USTA Michelob Light Tennis League, with some 13,000 players at the local level, culminating with the national championships in Chicago, a very humble beginning.  Penn Racquet Sports became the official ball of the USTA League program in 1987 and is currently in its 30th year of sponsorship.

The USTA Florida Section has historically ranked as the seventh largest of the 17 USTA Sections with almost 18,000 unique players and 42-44,000 registrations in each of the past three years.

Florida teams have done very well at the USTA League National Championships in recent years.  Last year USTA Florida teams won three national championship titles and another 11 teams placing in the Top 4 at their respective events.  Our 2016 national champions were the women’s 40 & Over 3.0 team from Julington Creek Plantation in St. Johns County (below Jacksonville;) the women’s 40 & Over 3.5 team from Eagle Landing Country Club in Orange Park (west of Jacksonville) and the men’s 40 & Over team from Coral Reef Park in Miami.

Find a league in your area.

This story originally appeared in the July/August issue of TENNIS magazine.