The USA Connolly Cup beat GBR in a long match; we started play at 11:30 and it was already hot and muggy, a summer Florida day in April. We finished a little after 6pm with a victory and in between there was a lot of running and sweating and watching and coaching.

Susan Wright took on Chris French, an accomplished player and won the first set 61. She led 42 when a combination of Chris’ fine play, the heat and the length of the match took its toll and Chris rebounded to win the final sets 64 63. So USA was down 1/0 to start the day, a rare occurrence.

Diane Barker took the court against the British #1, Anthea Stewart and played a brilliant match! She took away any though of moonballing by Anthea by taking the ball out of the air and angling the volley when Anthea lifted the ball. Diane played her game and won 61 63; she even hit an ace when serving for the match.

After a 30 minute break, Susan and Tina Karwasky took the court against Sue Bartlett/Ann Clark. They started strongly, going up 4/0, the Brits rallied to 4-5 and Susan served it out. Tina and Susan won the second set 62 to give the USA the Connolly Cup for the 8th straight year!

I didn’t play today but was on the court coaching, off the court taking photos and cheering like mad all day.. I felt as if I’d played a long match myself. It was really hot today, but the USA play was even hotter than the temperature.

The Court Cup team also had to come from behind to win their Cup, with Jolene Watanabe accounting for the singles point at #1 and the doubles point (with Alissa Finerman).  Though Florida’s Jenny Klitch lost a two hour match at #2 singles , according to Finerman, she  was instrumental in winning the doubles point due to her excellent coaching.

Lenglen Cup: USA finished ninth, winning both playoff matches (against Argentina and Brazil) after finishing third in its round robin group. Yulia Bolotova at #2 and Fanny Gamble at #1 won the singles and combined to win the doubles point.

Young Cup: USA fell to Spain 3/0. Florida’s Vesna McKenna, with Julie Cass lost in three sets in the doubles. Patricia Zerdan at #2 and Sophie Woorons-Johnston at #1 lost tough matches in the singles.

Italia Cup: The USA lost on Thursday 2/1 to Great Britain (winning the doubles point). Michael Halperin, Boca Raton lost 63 64 at #1 singles. They had the day off yesterday and play #6 seeded Germany for fifth place, a big improvement on the USA’s 17th place finish in 2013.

Trabert Cup: The USA lost to Italy 2/0 yesterday to finish 7th, also a big improvement over their 13th place finish in 2013.

Dubler Cup: The USA beat Germany 2/1. Oren Motevassel won at #2 in straight sets; Jeff Tarango won in three sets and Miami’s Mario Tabares/Art Hernandez lost 12-10 in the third set tiebreak in the doubles. The USA plays France in the final today at the Polo Club in Boca Raton.

Perry Cup: USA fell 2/1 to France in the semis of the Perry Cup, dropping both singles matches  before winning the doubles point. They play #2 seeded Italy for third today. 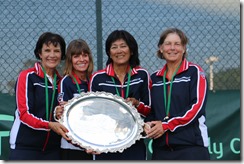 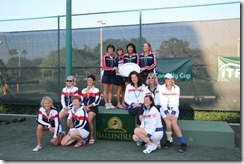 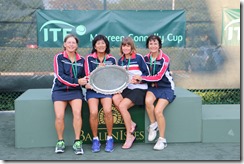 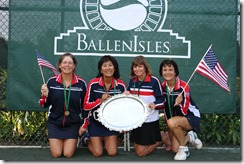 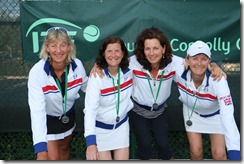 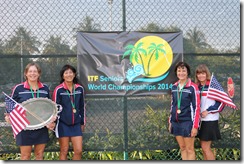 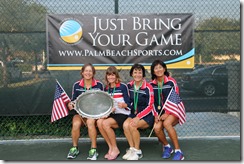