The day started early because I hit from 7-8:30 with my doubles partner for next week, Pam Cooke. We warmed up at 10:50-11:10 and started play about 11:30. We played on Court 15, a middle court in the back, but tomorrow, against the Netherlands we play on Center Court.

The USA men playing at BallenIsles had a tough match against Finland but won both singles. At #2 singles, Willie Quest won the first set and rallied from 2-5 down in the second to win it 7-5. He was really fired up to win it for the USA. Guillaume Gauthier clinched the tie for the USA.

Lenglen Cup: USA d. Sweden 3/0. They have a tough match tomorrow with Germany, who has last year’s world #1 at #2 singles.

Young Cup: USA d. Sweden 3/0. USA won both singles easily but had a tussle in the doubles, winning in three. Florida’s Vesna McKenna paired with Julie Cass to win the doubles point. 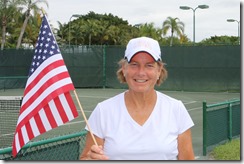 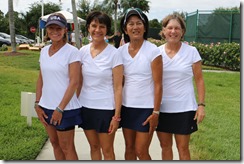 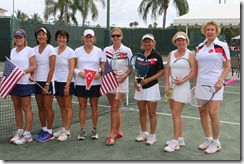