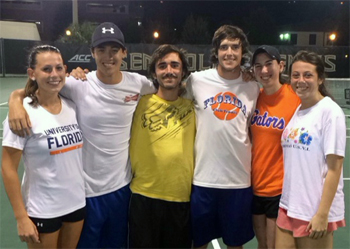 The University of Florida club tennis team started the 2014-15 season where it left off last year, winning all three Fall events of the USTA Florida ‘Tennis on Campus’ club calendar.

The season’s first event, the USF Bull Run in Tampa was rained out, then the UF team won the next three tournament’s at the FSU Capital Challenge in Tallahassee (d. University of Central Florida in the final), their home event at the UF Gatorbowl in Gainesville (the UF-“A” team beat the UF-“B” team in the final), and the UCF Knitro Cup in Orlando (d. the University of Miami).

“Overall we had a great time with everyone this fall and cannot wait for the spring tournament season come January,” said UF captain Max Koller. 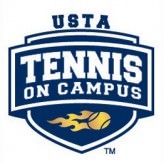 Even more impressive, the UF squad took time out to defend their title at the national USTA Tennis On Campus Fall Invitational in Hilton Head, S.C., repeating as champions by defeating Auburn 25-18 in the final.

The team captain Koller was not on the squad when UF won their first Fall Invitational in 2013.

“After they won I saw a post on Facebook that they had won the big Fall invite and I knew they had a really good team,” Koller said. “I wanted to be part of that and had heard how fun Tennis On Campus is.”

For more information on the USTA Florida ‘Tennis on Campus’ series visit www.USTAFlorida.com/TennisOnCampus, or contact Desirae McLaughlin at tennisoncampusflorida@gmail.com.