The champion University of Florida team

“Overall we really enjoyed the success of our teams from top to bottom,” said UF captain Max Koller. “We take pride in the continued success of our group season after season, and are looking forward to the upcoming tournaments the rest of the semester. At the University of Florida our strength lies in our depth. We have players on our ‘D’ team that could play on our ‘A’ team at any given moment.” 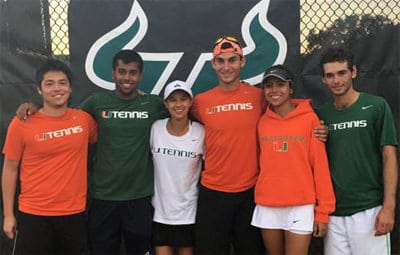 The Gold Bracket finalists from the University of Miami

UF in their semifinal defeated the University of Central Florida-“A” team, while UM stopped the host University of South Florida-“B” squad. It was UF’s 17th consecutive win in a USTA Florida ‘Tennis on Campus’ Series event final, dating to September 2013 when they lost to UCF in the final of the FSU Capital Challenge in Tallahassee.

“For the ever-popular Bull Run the weather gods were working overtime to provide some of the most pleasant fall weather,” said USTA Florida Tennis on Campus Coordinator Desirae McLaughlin. “We had perfect weather and some pretty exciting matches.” 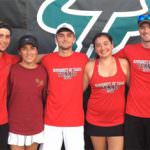 The Bronze Bracket winners from the University of Tampa 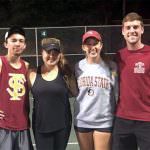 Erica, center right, and teammates after winning the Silver Bracket at this seasons USF


Next up on the Florida Tennis on Campus schedule is the Knightro Cup in Orlando on Nov. 5-6.

About USTA Tennis On Campus
The USTA’s Tennis On Campus program is designed to provide college students with opportunities for team camaraderie, social networking, and rivaled competition through tennis without the rigors of a NCAA varsity program. Tennis On Campus offers fun co-ed team-based play (using the World TeamTennis scoring format), regional and national championship competition, and helps students maintain active and healthy lifestyles through their college years. Currently the program is offered on more than 500 college campuses. The USTA Tennis on Campus team format features men’s and women’s singles, men’s and women’s doubles and mixed doubles, with a minimum of two men and two women per team.

For more information on the USTA Florida Tennis on Campus series or to start a team at your school go to www.ustaflorida.com/TOC, or contact Desirae McLaughlin at tennisoncampusflorida@gmail.com.