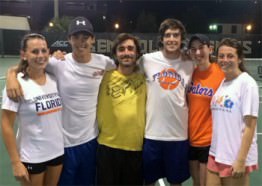 The champion UF “A” team

The defending season champion University of Florida club tennis team started the 2014-15 USTA Florida ‘Tennis on Campus’ campaign on a high note on Sept. 27-28, 2014, capturing the title at the FSU Capital Challenge in Tallahassee.

In the rain-interrupted Gold Bracket final the UF “A” team defeated the UCF “A” squad for the title. The UF team in the semifinals denied the host FSU team, while UCF stopped a potential all-Florida title by defeating the UF “B” team.

It was the first tournament of the Florida 2014-15 ‘Tennis on Campus’ schedule following the rain-out of the USF Bull Run in Tampa on Sept. 13-14. 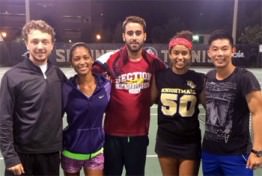 The finalist UCF “A” squad

“FSU was a little bit drier than USF’s tournament but rainy nonetheless,” said USTA Florida ‘Tennis on Campus’ Coordinator Desirae McLaughlin. “They were able to complete the Gold Bracket draws but did not finish the Silver Bracket.”

The next event will be later this month at the UF Gatorbowl hosted in Gainesville.

For more information on the USTA Florida Tennis on Campus series www.USTAFlorida.com/TennisOnCampus, or contact Desirae McLaughlin at tennisoncampusflorida@gmail.com.