The University of Florida club tennis team both kept their perfect season intact and defended their home turf at the 2014 UF Gatorbowl in Gainesville on Oct. 25-26. In the all-UF final the UF-“A” team edged the UF-“B” squad 23-21 for the title.

“Overall we had four of our five teams make the Gold Bracket, and our ‘B’ squad made the final,” said UF captain Max Koller. “That is a true testament to the depth of our team and how all of us really contribute, not only with high-level tennis but supporting each other as we go along.”

The UF-“A” team in the semifinals defeated the Florida Gulf Coast University “A” squad 30-13, while the UF-“B” team in their semis edged the University of Central Florida “A” team 25-24.

The UCF-“C” team won the Silver Bracket final over the University of South Florida “B” squad, and in the Bronze Bracket final the Stetson “A” team defeated the USF-“D” team.

UF is now a perfect 3-0 in tournament appearances in 2014 after earlier this month becoming the first repeat winner at the national USTA Tennis On Campus Fall Invitational in Hilton Head, S.C., defeating Auburn 25-18 in the final. 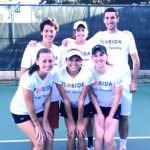 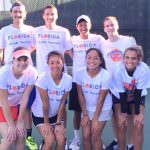 The next event on the USTA Florida “Tennis on Campus” circuit will be the UCF Knitro Cup hosted by the University of Central Florida in Orlando in November.

For more information on the USTA Florida Tennis on Campus series contact Desirae McLaughlin by visiting our Contact Us page..