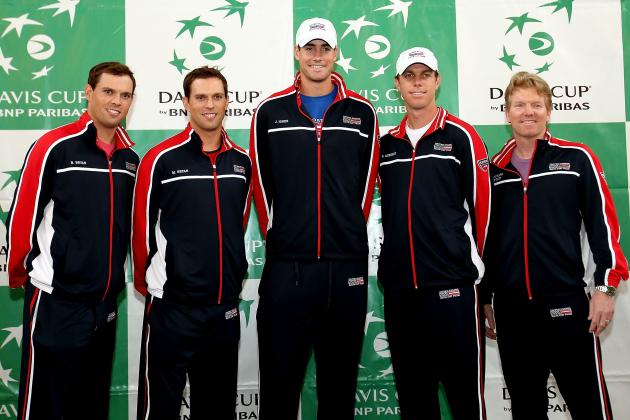 See if you can match the above critique of what U.S. men’s tennis needs to the critique’s source:

Spoiler Alert: there is no quick fix to the present cyclical downturn in U.S. men’s tennis. It’s similar to U.S. women’s tennis, which a few years ago had only three women ranked in the Top 100. Now there are 11, with a few knocking on the door of the Top 20.

You’ve probably heard all the excuses and finger-pointing ad nauseam in regard to the struggles of U.S. men’s tennis:

“For where we’re at, we’re going to have to be patient,” said Gilbert, the former coach of Andre Agassi and Andy Murray among others, speaking with USTA Florida. “Obviously it’s pretty lean times but it is what it is. The USTA is doing the best they can and so are private entities.”

Joyce, the former ATP player who has coached Maria Sharapova among other players, earlier this year flipped his lid somewhat after getting his fill of private American coaches and critics bemoaning the fate of U.S. men’s tennis.

“I just don’t understand what good they think they’re doing blasting every move American tennis is trying to make,” Joyce told tennis writer Bary Buss in March. “If these guys are so brilliant and have all the answers, how come the decline in tennis has happened while they have been the unofficial leaders of the private sector? Where are all their players? And don’t make me sick with the finger pointing blaming the USTA, or [USTA] Player Development or Patrick [McEnroe], we’re all to blame, private and public.”

Higueras’ frustrations as the USTA director of coaching also boiled over earlier this year when speaking to the LA Times, this time aimed at drive, or lack of, of some of the young American players.

“We are lacking competitiveness in our [American] players,” he said. “We have good coaches, but the culture of our players needs to improve…If our players were European, things would be different. Being No. 80 in the world wouldn’t be enough then.”

Yowch. But no one said it would be easy following up on the Pete Sampras-Andre Agassi-Michael Chang generation. And apparently accusing your players of not being “hungry” enough is a growing issue.

Gilbert agrees with the cyclical nature of a country producing stars. Remember when Sweden topped tennis in the 1980s? And where was Switzerland on the tennis map prior to Roger Federer? Or Serbia before Novak Djokovic?

Gilbert points to the head start the U.S. had, and other countries now catching up.

McEnroe agrees that the U.S. can no longer rest on the accomplishments of producing the most No. 1s in the history of the rankings, and instead needs to make some bold moves to keep up.

One bold move was the USTA mandating the 10 and Under Tennis format for kids age 10 and under in the U.S., to broaden the pool of future U.S. players and get more kids playing at a younger age. 10 and Under Tennis makes the game more fun and easy to learn with modified equipment, keeping kids from jumping to easier-to-learn sports.

“We need to get better athletes playing at a younger age,” Gilbert says of planting the seeds for future.

Another bold move is changing more of the big U.S. junior tournaments from hardcourt to clay, forcing kids to learn proper tactics and constructing points, rather than just whaling away at serves and forehands. The Orange Bowl in Florida has been moved to clay, as have many other prominent U.S. junior events.

“USTA Director of Coaching Jose Higueras and I firmly believe that providing our juniors with more training and competition on clay will ultimately lead to more well-rounded players, and will better serve these players as their careers progress,” said McEnroe when the Orange Bowl change was announced. “Moving our largest and most prestigious international event back to clay will help teach our players more court awareness and better movement.”

That movement and speed, says Gilbert, is where the future is at if you look at the Big Four — Nadal, Djokovic, Federer and Murray — who combined have won 34 of the last 36 Grand Slam titles since 2005.

We need [American] kids to play on clay more,” Gilbert says. “All the courts have slowed down now — hardcourts and indoors and grass — and learning to play on clay helps you move, helps to learn to build points. You know, 34 of the Top 40 players in the world are European and most of those players learned to play on clay. We need to have way more USTA tournaments on clay, and have way more courts on clay. In California I think .01 percent of all the courts are clay. We have to embrace clay and play way more on clay, and that will help with movement and points and ground game. That should be priority No. 1.”

So what is on the horizon in men’s tennis? Pretty much the answer no one wants to hear.

It all seemed so easy when the Bollettieri Academy was pumping out the Agassis and Couriers, or when a junior player with a bad two-handed backhand suddenly changed to a one-hander and rose to dominate the sport.

In addition to Isner and Querrey, young U.S. players currently in the Top 100 include Bradley Klahn, Steve Johnson, Donald Young, and Jack Sock. On the current ITF international junior boys’ rankings, the U.S. has three in the Top 10 — No. 2 Francis Tiafoe, No. 5 Stefan Kozlov, and No. 10 Michael Mmoh.

“I’m really encouraged by the next generation,” McEnroe said earlier this year. “There are a lot of really good players — both men and women. But it’ll take time and patience to develop that talent that we do have.”

Share your thoughts on U.S. men’s tennis and meeting the challenges of a changing global tennis landscape in the comment section below.