Bethanie Mattek-Sands provided all the U.S. Fed Cup team members with red and white “hair” sticking out of a star-spangled blue headband, setting the stage for a fun Fed Cup Community Day on Wednesday, April 19 at Saddlebrook Resort.

The famed tennis training center will be the site for this weekend’s U.S. vs. Czech Republic Fed Cup semifinal in Wesley Chapel, Fla.

At the community event players age 5-18, more than 75 of them, played on courts from 36-foot to full size. It was red balls for the youngsters, and yellow balls for the more advanced players that competed in king-of-the-court doubles with members of both the U.S. Fed Cup and Junior Fed Cup teams.

“I enjoy these events,” said U.S. Junior Fed Cup team member Whitney Osuigwe, who turned 17 this month, and was partnering a local middle school player in doubles during the community tennis celebration. “Like the girl I’m playing with now, she’s so cute.”

Osuigwe was joined by fellow U.S. Junior Fed Cup team members Caty McNally and Natasha Subhash. In the middle of the event the local players were surprised by the team that will compete this weekend — Australian Open semifinalist CoCo Vandeweghe, Lauren Davis, Shelby Rogers and the world No. 1 doubles player Mattek-Sands.

After the on-court action the players all gathered for a Q&A and a group photo, which then turned into a flurry of selfies with local players and the pros.

“I think any time you can bring out kids from the community and especially have them at Saddlebrook Resort is a great experience,” said Leah Friedman, national skills manager for the USTA. “And on top of that to have the Fed Cup team and the Junior Fed Cup team interact with them, you couldn’t ask for a better day.” 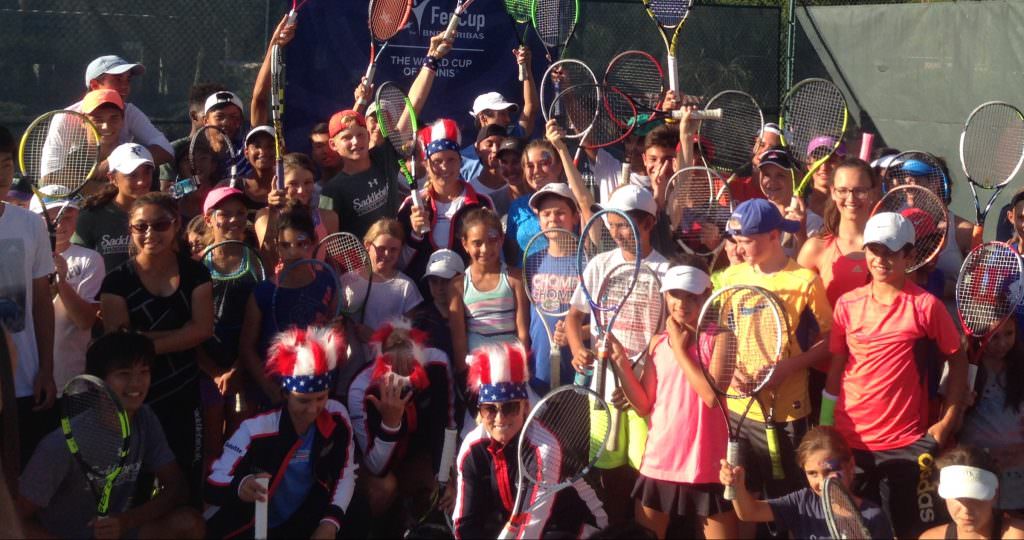 “The Fed Cup is the first event of this magnitude to come to Tampa Bay,” she said. “We were able to get together a lot of enthusiastic volunteers for the events, people have really been excited about it. Fed Cup is huge, it’s our U.S. players.”

Tickets for the Saturday and Sunday 2017 Fed Cup by BNP Paribas World Group semifinal are still available, with single-day and two-day ticket packages. Tickets may be purchased by visiting www.usta.com/fedcup or by calling 888-334-USTA (8782).