Despite a rain-soaked few days, four top-seeded players went home as champions this week after raising titles at the 2021 USTA Florida “Bobby Curtis” 12s/14s Junior Section Championships. The tournament was contested June 12-16, 2021, at the USTA National Campus in Orlando. 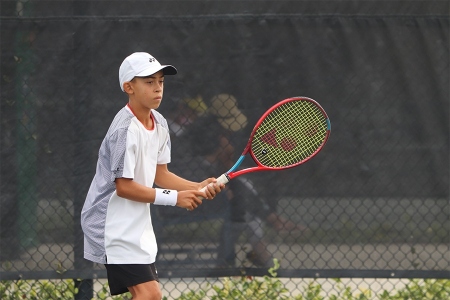 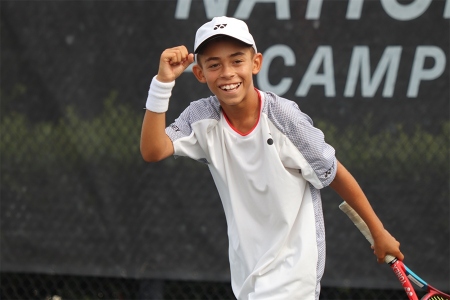 The boys’ 12s division was dominated by No. 2 seed Jordan Lee (Orlando), who breezed through each round of the main draw, winning five 6-0 sets throughout the competition. On his way to the finals, he downed the No. 9 seed in the round of 16, the No. 6 seed in the quarterfinals, and the No. 12 seed in the semifinals. He met top-seeded Teodor Davidov (Bradenton) in the championship match, where Lee outlasted Davidov 6-1, 6-1 to capture the divisional title.

“The last point of the finals – I’m going to remember that for a long time,” shared Lee when asked how he felt after winning the championship. “It means a lot. Not because of the ranking, but because of the memories and all of the experiences I’ve had leading to this moment.”

Lee is no stranger to USTA Florida’s “Bobby Curtis” tournaments. He was the top seed and champion at the 2020 USTA Florida “Bobby Curtis” Green Ball Sectional Championships, after a fifth-place showing in the 2019 tournament. The 6th grader is ranked No. 9 nationally and No. 2 in Florida and the Southeast on TennisRecruiting.net’s recruiting rankings. 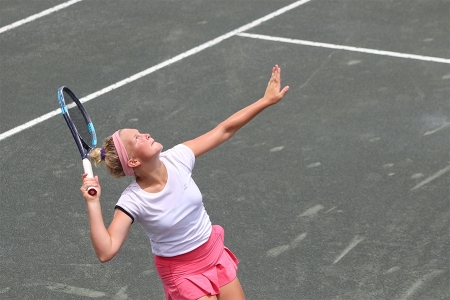 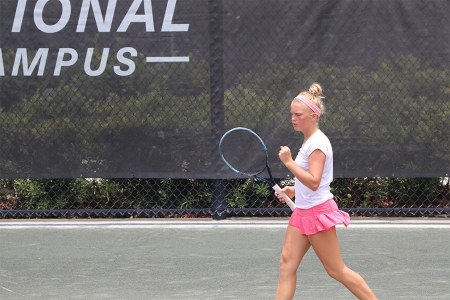 It was the battle of Boca Raton in the girls’ 12s division, as the No. 1 seed Anastasiia “Nastya” Rychkova and No. 2 seed Abigail Gordon each crushed the competition on their way to the finals. Rychkova did not face a fellow seeded player until the quarterfinals where she defeated No. 5 Adriella Samabaly of Miramar and later claimed victory over the No. 3 seed in the semifinals. Meanwhile, Gordon conquered the No. 9 and No. 6 seeds in the early rounds before defeating the No. 14 seed in the semifinals. The finals match between Rychkova and Gordon began outdoors, but after combatting several rain delays was moved to the indoor courts, where Rychkova edged out the victory 6-4, 3-6, 6-3.

“The finals. The girl was really good. Before I had lost to her but today I beat her,” said Rychkova when asked what the most memorable moment of this tournament was for her. “We split sets and she was winning 2-1. My game just didn’t go. I kept losing points, but then something happened and I just started winning every game I played with her. I just told myself that I can’t lose.”

Rychkova is a 2019 Little Mo International Championships girls’ 10s divisional winner. According to TennisRecruiting.net’s recruiting rankings, the 8th grader is ranked No. 11 in Florida, No. 19 in the Southeast, and No. 66 nationally. 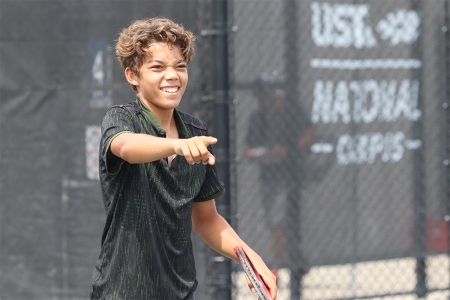 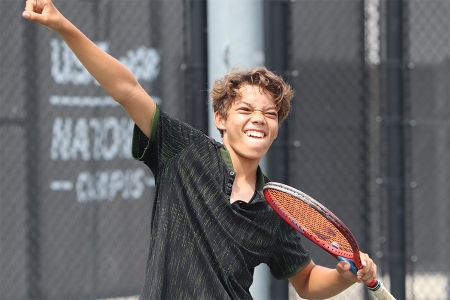 The top two seeds in the boys’ 14s division also cruised through the main draw. No. 2 seed Yubel Ubri (Hollywood) is a “Bobby Curtis” regular, who won the Florida state tennis title in the 10 and under division in 2016. He overcame the No. 14, No. 5 and No. 11 seeds to make it to the finals in his quest for another title. Seeded at No.1, Darwin Blanch (Deerfield Beach) claimed two 6-0 sets in the round of 16 and a third in the quarterfinals, where he took down the No. 8 seed to advance to the semifinals. There, he defeated the No. 4 seed and clinched his spot in the championship match, where he found a 6-1, 6-2 victory over Ubri.

“[Winning the state championship] means a lot,” said Darwin after the finals. “I spent two months practicing for this tournament because I knew it was coming up. I came here and played my game and I won.”

Blanch, a freshman, is ranked No. 6 in Florida, No. 8 in the Southeast, and No. 20 nationally on TennisRecruiting.net’s recruiting rankings. Blanch is the younger brother of American tennis player Ulises Blanch, who currently sits at No. 247 in the ATP Rankings. 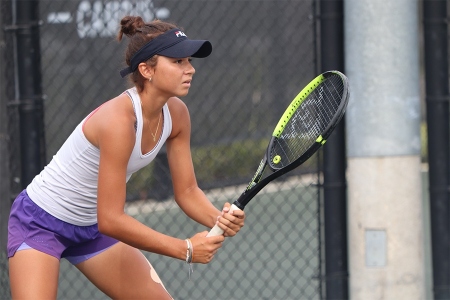 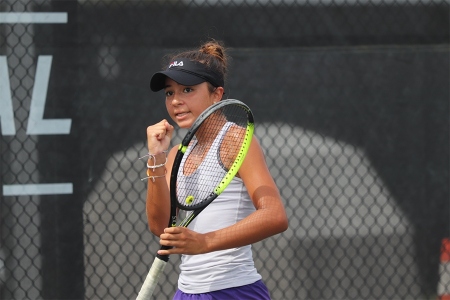 The final of the girls’ 14 division saw an east coast-west coast matchup play out on the courts of the National Campus. No. 5 seed Gabriella Rawles (Bradenton) powered through the early rounds against unseeded players before defeating the No. 7 seed in the semifinals. Meanwhile, No. 2 seed Lauren Kettlewell (Doral) vanquished the No. 9, No. 8 and No. 3 seeds on her quest for the title. Kettlewell and Rawles went head-to-head on the championship court where Kettlewell prevailed with a 6-4, 6-4 victory.

“Coming into this tournament I was pretty nervous because I was seed two, so I felt like there were expectations,” shared Kettlewell, who trains at MGT Academy in Doral. “Winning feels pretty good but I was just trying to complete my objectives and perform well mentally.”

This is Kettlewell’s first Florida section championship title. She reached the round of 16 in her quest for the girls’ 12s title in the 2018 edition of the USTA Florida “Bobby Curtis” Junior Section Championships and made it to the quarterfinals in the 2018 “Bobby Curtis” Doubles competition. According to TennisRecruiting.net’s recruiting rankings, the freshman sits at No. 11 in Florida, No. 17 in the Southeast, and No. 43 nationally. 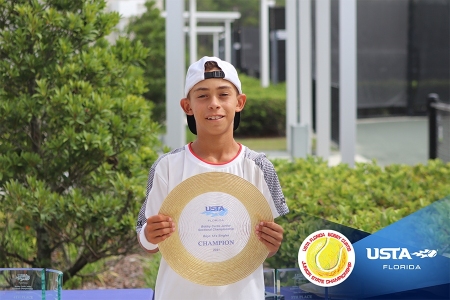 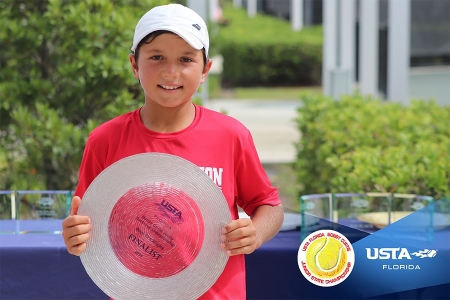 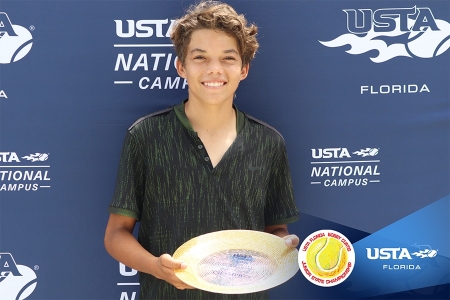 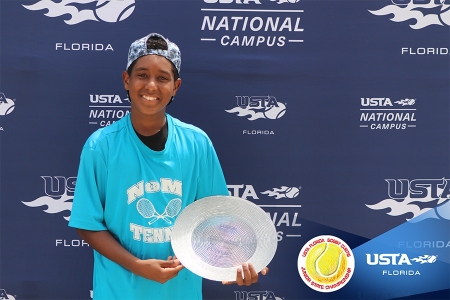 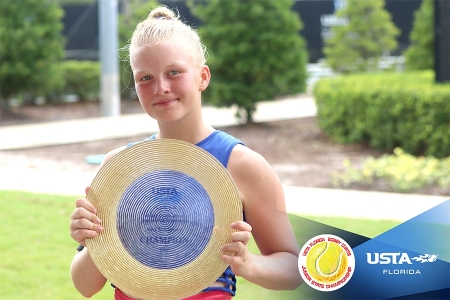 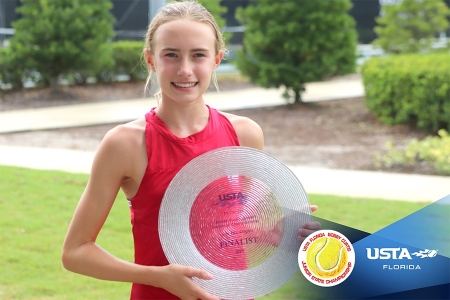 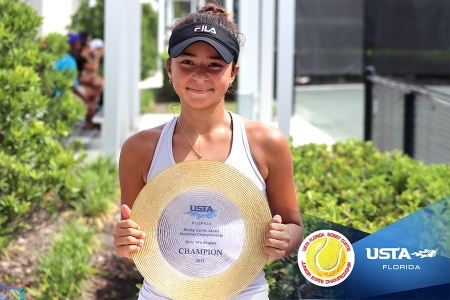 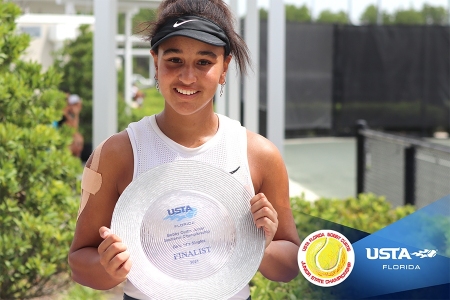 The 16s and 18s divisions of the USTA Florida “Bobby Curtis” Junior Section Championships will be held June 19-23, 2021.