There’s No Place for Race on the Courts: Exploring Racial Injustice Through the Eyes of a Coach

Tennis is a sport that is able to bring different communities together. It’s known as the “game of a lifetime” or “the game for everyone” – regardless of age, gender, race, orientation and socioeconomic means. However, the question has been raised: does tennis have a diversity problem?

Take one of the United States’ prospects on the men’s tennis tour, Frances Tiafoe. In June of this year, the at the time world No. 81 said a lack of diversity in the sport makes him feel like an “outsider”. The 22-year-old, who is one of the very few Black men in the ATP’s top 100, also believes he has had to work twice as hard to reach the elite level.

Tiafoe has encouraged other tennis professionals to get involved in tackling the diversity problem within the sport. The once common trains of thought – “tennis is only played at country clubs” and “Black people don’t play tennis” – have been seriously impacted by the Williams sisters’ legacy on the court, but more needs to be done to address the balance.

That uneven playing field is not just in the professional realm – it’s also felt at the local level. Overcoming that stigma and working to increase diversity among all facets of the game are some of the objectives of USTA Florida. The organization’s mission is to “Promote and Develop Tennis for All” – a sentiment that celebrates the idea that anyone from anywhere should be able to play and compete. So, when Boca Raton coach Christopher Clarke reached out to USTA Florida via Instagram to have a conversation about improving and protecting the organization’s relationship with the Black tennis community – they listened.

“I believe the Black community is the area most ignored by the tennis community,” shares Clarke, the PTR-certified pro and Director at Grind Tennis Academy. 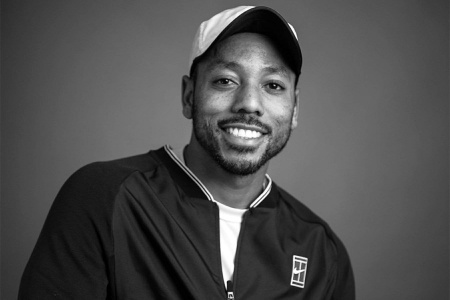 Clarke got involved in tennis when he was 15 and attending high school in Springdale, Md. He joined the high school’s tennis team because all his friends at the time also wanted to join. The rest was history. Clarke went on to attend the University of Maryland Eastern Shore where he reached No. 1 in both singles and doubles, and has worked at various tennis clubs and academies including Court Play Tennis in Burke, Virginia, before working with Grind Tennis Academy. Clarke is also the Senior Professional at the Boca Raton Swim and Racquet Club Center. Despite the impressive resume, the coach says his ethnicity has had a major impact on his life.

“I’ve been laughed at and called names behind my back while walking into a tournament full of white players,” he says. “I’ve been singled out and called aggressive by umpires for asking if a call could be overturned. I’ve been told I play well for a ‘black boy’ before and have been called ‘boy’ and other racial slurs by my directors. I’ve had a boss that called me his driver to clients because he thought it would be funny.”

And that’s just the impact on the court – a sample of the journey Clarke has been through to get to where he is today. Off the court, Clarke explains he’s had a much harder time finding opportunities to teach than his white counterparts.

“I’ve been judged due to my ethnicity and told I don’t fit into particular molds to hold any high positions at local academies and local pro jobs. I’ve been excluded from groups and organizations because I don’t fit the image the organization wants to put forward,” he continues. “I’ve been followed around sites and stared at as I enter facilities and I’ve been talked to like it is impossible for a Black man to know how to play tennis.”

“My ethnicity is everything to me,” he affirms. “This inheritance I received has made me so much more of a stronger person and has guided me along the way to a deeper understanding of what is right and wrong.”

Clarke’s ethnicity and racial background has played a role in his life whether he welcomed it or not. Tennis is his passion – but that doesn’t mean he hasn’t felt less valued in tennis-related spaces due to the color of his skin. He’s been called uneducated, had his input for program growth tossed aside and has had slurs thrown at him before, during, and after matches. He’s also had difficulty finding support in a tennis community.

“The black and minority community in tennis is extremely small,” he explains. “I currently still don’t have a community here that I feel safe to talk to or grow around.”

One way to change that? He believes organizations like the International Tennis Federation, the USTA and USTA Florida could benefit from hiring more people of color to help build and foster a community that will help others feel safe.

“A lot of us have to speak differently, walk differently and dress differently because our tennis audience doesn’t look like us,” he says. “If more people of color were hired, we would have the community others have and feel more empowered to grow the organization we work for.”

That’s not just limited to larger entities either – that suggestion also goes to local facilities, grassroots programs, and nonprofits. Clarke was brought up through Prince George’s Tennis and Education Foundation (PGTEF), a registered USTA Community Tennis Association and the Washington Tennis and Education Foundation (WTEF), both in the Washington, D.C. area. Both organizations are dedicated to building life champions through tennis and academic excellence by providing underserved kids with a safe environment where they can excel. The organizations allowed Clarke to see himself in the game; he saw those like faces that created a more inviting and engaging experience. He believes programs at all levels – local, collegiate, and national – need to have more role models who are people of color to encourage young, Black athletes that this is a sport they can participate in.

“I worked temporarily at the Delray Beach Tennis Center and I could see there is a large African American community there in need of a strong role model,” Clarke recalls. “The fact that we have Serena, Venus, Coco, Francis and Felix shows that there is a huge potential for superstars in the Black community. They should be given the opportunity and shown the process to professional and college life.”

If it’s not abundantly clear by now, Clarke’s driving message is all about community. Communities play an important role in every aspect of life – whether it’s a community of friends, family, neighbors or others. For most, having a sense of community creates unity and provides opportunities to connect with others, to reach goals, and to feel safe and secure. Clarke believes a greater focus should be put on growing Black tennis communities to allow players, coaches and volunteers the chance to grow within the world of tennis with others who look like them.

“There are so many players, coaches, and family members who have been silent because they have no community to cry to, no person to speak to who will be on their side, and because we just want to be heard,” he says. “Injustice hurts us all, but we carry scars within us that we have had to ‘get over’ for years now. We just want a voice and community where we can grow and feel safe.” 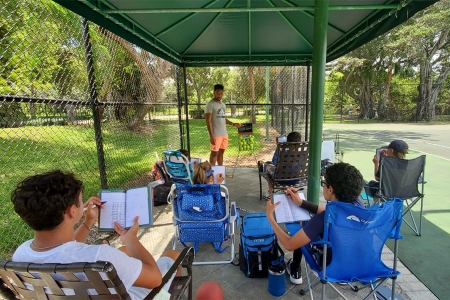 At Grind Tennis Academy, a sense of community is something Clarke hopes to instill in his players daily. He believes tennis could greatly benefit from a change in image, and the way to do that is by promoting diversity and taking the steps to bring people from different walks of life to the table to share their experiences. It is all about the conversation and the culture – something he shares with his young athletes.

“During camps and full-day programs we have a mental analysis where we sit and speak about things that can affect us on and off the court,” he shares. “We learn more about ourselves and the family and friends around us. I often bring other coaches into the conversation because its important for us to learn from each other so whatever greatness we grow here blossoms outside.”

Clarke reached out to USTA Florida to relay his thoughts, ideas and suggestions to help the organization improve. After being subjected to several negative experiences on the court due to his race and ethnicity, the coach doesn’t want the pattern to continue. Just like Francis Tiafoe, Clarke has taken it upon himself to advocate for changes in tennis when it comes to diversity. It’s clear that Venus and Serena inspired a generation of young athletes to pick up a racquet, because they wanted to be like the Williams sisters. The same parallel can be drawn in most major sports, such as basketball star Michael Jordan, when thousands of children aspired to be like Mike. To Clarke, having more people of color portrayed in the professional realm is just the tip of the iceberg – because that growth, encouragement and success for young athletes starts in their local communities.

“Let’s build a better image of America through tennis and through the great communities around the country.”