High School tennis is in full swing with several great stories. One of these is the boys’ and girls’ teams from Miami Palmetto High School. The Panthers are the defending 4A boys’ and girls’ state team champions. Both teams are poised to repeat that accomplishment this spring as many of the players have returned.

On the girls’ side, all but one player from last year have returned. Samantha Alicia was the only graduating player from the 2018 championship team. She has since signed and is playing for Arizona State. She is one of several players from both teams who are some of Florida’s highest-ranked junior players who have also committed to play for their high school teams. 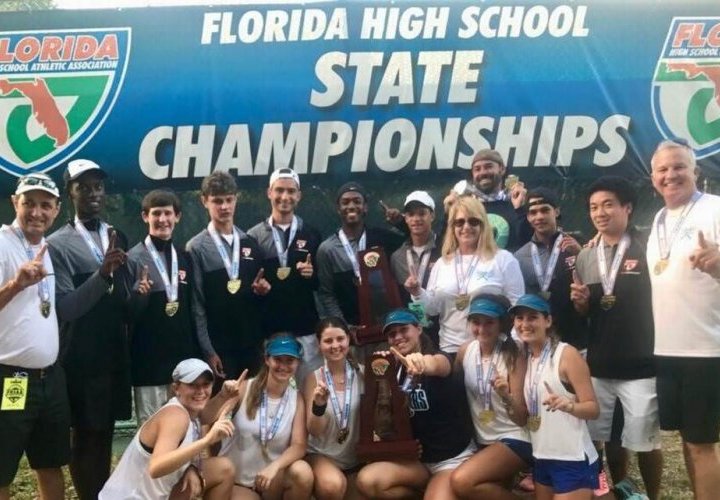 The Miami Palmetto boys’ and girls’ teams from 2018

One returning player, junior Allysa Hayduk, is currently ranked in the Top 100 in the USTA Florida Girls’ 18s Rankings in Florida. Her drive to play high school tennis centers around the fun part of being on a team.

“I’ve grown up around this high school since my Dad is a teacher and assistant athletic director here, and I made it a dream of mine to win a state championship for the school,” she said. “Last year when we won, it was the first state championship for the school since 2010 and the first for girls’ tennis since the ’80s, and to walk around school after that and have my classmates acknowledge and congratulate us was amazing.”

Ally also talked about the impact of Coach Kelly Gibson.

“She is our biggest cheerleader, always there to support and encourage us no matter how we are doing and no matter what, we’ve got this,” she said. “She is such a key to our success as a team.”

Another player coming back is sophomore Nathalie van der Reis, currently ranked No. 82 in the girls’ 18s rankings in Florida. Nathalie spoke about what it meant to her, especially being a freshman on a very strong and deep team.

“So last year, both boys’ and girls’ teams won and that was the first time ever and we were put into the school hall of fame which was a great honor,” she said. “Our team is really deep and very strong and even though our top player from last year graduated, we got two new players who I train with who are both really good so that makes our Top 5 pretty strong.”

Nathalie also spoke about the coach and how special she makes things for the players.

“She really keeps the team together with team lunches and activities,” she said. “One cool thing she does for us is when you make the team, she gets these goodie bags with stuff like tennis balls, bracelets, wrist bands, candy and motivational messages and she has the team captains deliver them to your classroom and announce it to everyone.”

The boys’ team is equally as strong and driven to repeat.

Junior Cole Gibson is not only ranked in the Top 150, but is also the son of coach Kelly Gibson.

“My mom really cares about the players,” he said. “Not only in our success on the court, but making sure we have fun as a group off the court. Last year after we won the state championship, we went to Kobe Steakhouse for dinner, which was really good and was a great way to celebrate what both boys’ and girls’ teams had accomplished.

“She does a lot of little things that make being part of the team really special for everyone, and for me, having my mom as the coach can sometimes be tough, but it’s great having her there.”

Coach Gibson said it best when we first spoke: “Having such good players on the team makes everyone work hard year after year to build on our success and hopefully we can keep it going.”